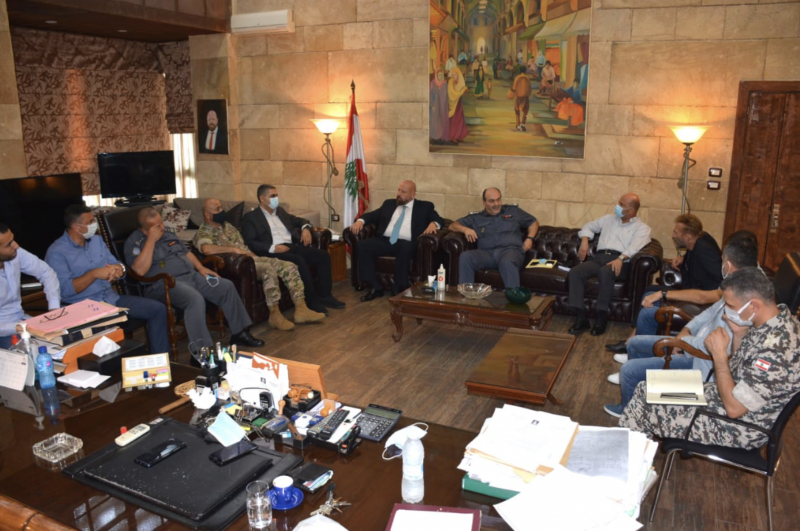 A meeting of the Central Security Council's North Lebanon sub-council at the office of Gov. Ramzi Nohra. (Credit: NNA)

As soon as night falls in Tripoli, scooters are no longer allowed to circulate, and roadblocks in the city are multiplying.

These decisions were taken during an emergency meeting of the Lebanon-North sub-council of the Central Security Council held on Thursday at the government serail in Tripoli, headed by Ramzi Nohra, the governor of the North governorate, in the presence of senior officials from the army, the police and General Security, as well as Ziad Chaarani, the assistant public prosecutor in the North.

They came in response to a marked deterioration in the security situation in the northern city, with the exacerbation of the fuel crisis and the drastically increased hours of power cuts.

At the end of the meeting, three major measures to be taken were announced: scooters will be banned from circulating between 10 p.m. and 6 a.m.; additional fixed and mobile roadblocks will be established throughout the city in a bid to prevent thefts, sporadic shootings and murders; and gas stations will open for longer hours in order to reduce traffic congestion on the main roads running alongside them and to prevent shooting and brawls at the stations.

Riad Yamak, the mayor of Tripoli, had previously voiced the citizens’ complaints about growing insecurity, noting that “almost no day goes by in Tripoli without an incident disturbing the public order.”

Amid the ongoing deterioration of the quality of life and the outrageous increase in prices and unemployment, crime has been on the rise in the city. According to a security source in Tripoli, both murders and pickpocketing have increased.

And with the almost complete absence of state in Tripoli, residents have become afraid to go out after dark, given the increase in crime rates while they see authorities as standing idly by.

This increasingly chaotic security situation raises the concerns of local officials, as they do not have the means to deal with it.

Yamak spoke to L’Orient-Le Jour of the “laxity” of the police who, overwhelmed and unable to stem the tide of delinquency and criminality, seem to have given up on controlling the situation.

He welcomed the recent measures announced by the Security Sub-Council, hoping that they will not be temporary.

“What is happening in Tripoli is an extension of the chaos and security tension everywhere in the country,” says Khaldoun al-Sharif, one of the city’s political figures, who believes it is “essential” to form “a crisis unit” to manage this catastrophic situation.

The security sub-council’s meeting was motivated by the fact that every day, at nightfall, in the city’s neighborhoods, deprived from state and private generators electricity, prowlers and youth gangs on scooters roam the streets, often under the influence of drugs, according to a security source.

The security forces have tried to step up their patrols but found themselves overwhelmed by the large number of complaints.

Umm Fadi, who lives in the residential district of Miteyn, reprimands police officers for lacking consistency, in the sense, according to her, that they either carry out brutal operations, generally against the poorest communities, or they leave the situation uncontrolled for extended periods.

A young man, “a stranger to the neighborhood,” recently threatened to rob her wallet at knifepoint.

“It happened in front of my house, just before sunset,” Umm Fadi says. She mustered up the courage to slap him in the face, risking being stabbed, before she ran inside her house and closed the door behind her.

These crimes and offenses are directly linked to the lack of basic necessities among the population.

Jalal Najjar, an employee at a food business in Dahr al-Ain, was assaulted on his way back home on a scooter at 9:30 p.m.

He was robbed by two masked individuals who stole his wallet and phone “a few meters from a police checkpoint,” he said.

“We were forsaken by public services, and today we are forgotten by the security forces,” he laments.

Crimes and settling of scores

What’s worse is that crimes and blood feuds are also rocking the city.

On July 24, Abu Osman Merheb, an official of the Islamic organization Jundallah, was killed, following a row over the neighborhood generators and diesel supplies.

Last week, an army intelligence officer, Ahmad Murad, known as Abu Ziad, was shot dead at close range near the Miteyn roundabout by masked men who fired several bullets into his head as he was on his way out of a bakery with his wife, who was slightly injured.

A suspect has been arrested by the Lebanese Army, according to an army statement.

As soon as night falls in Tripoli, scooters are no longer allowed to circulate, and roadblocks in the city are multiplying.These decisions were taken during an emergency meeting of the Lebanon-North sub-council of the Central Security Council held on Thursday at the government serail in Tripoli, headed by Ramzi Nohra, the governor of the North governorate, in the presence of senior officials...