Here’s what happened over the weekend and what to expect today, Monday, Aug. 2, and this week 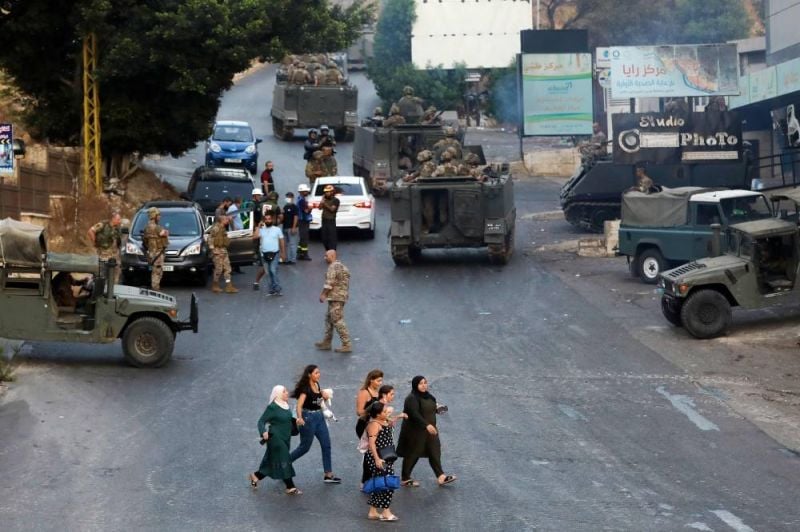 People are evacuated as Lebanese soldiers deploy in armored vehicles amid clashes in the Khaldeh area, south of Beirut, on August 1. (Credit: Anwar Amro/AFP)

Gunmen ambushed a funeral procession in Khaldeh, south of Beirut, killing at least two people and setting off an hourslong firefight. The violence erupted during the funeral of Ali Chebli, a Hezbollah member who was shot and killed at point-blank range while attending a wedding party at a resort in nearby Jiyyeh on Saturday night. Footage of a video broadcast on Hezbollah’s Al-Manar TV channel showed a volley of gunfire being launched at a convoy of mourners arriving at Chebli's home on Sunday evening. The weekend’s deadly violence, which is connected to an ongoing feud between Shiite supporters of Hezbollah and Sunni tribesmen in the area, raises anxieties about heightened sectarian tensions against a backdrop of the country’s economic crisis.

Starting this week, anyone aged 16 and older must present a COVID-19 vaccination certificate, a recent negative coronavirus test or a document proving a previous infection to gain entry to tourist establishments, including bars and restaurants. The decision, based on a recommendation from the national COVID-19 committee and widely believed to be designed to stave off another total lockdown, comes at the peak of Lebanon’s summer tourist season and as Lebanon is again registering more than 1,000 new COVID-19 cases daily. Meanwhile, just 26.2 percent of the population is partially vaccinated and 18.3 percent is fully vaccinated. The tourism police will be responsible for monitoring the new “health pass” measures’ implementation, the Tourism Ministry stated, adding that people should continue respecting the preventive measures already recommended.

Najib Mikati will meet with Michel Aoun again today but has ruled out the possibility of forming a cabinet before the port blast’s anniversary. Since his designation last Monday, Mikati has already visited the Presidential Palace a number of times and held consultations with leading political parties, prompting speculation that a cabinet might be announced ahead of the emotive anniversary of the catastrophic Beirut port explosion on Wednesday. However, reports have surfaced that the allocation of crucial cabinet ministries is posing a challenge for him, as it did his two immediate predecessors. For his part, Mikati stressed that he is not working to any deadline and ruled out the possibility of forming a government before Aug. 4.

Wildfires continued to ignite over the weekend despite appearing to have been brought under control late last week, displacing more residents and laying waste to further tracts of land. Two fires broke out near the village of Akkar al-Atiqa in northern Lebanon on Saturday, and another fire was reported in Deir Ammar on Sunday. Wildfires have raged across the northern Akkar region and in Hermel since Wednesday, sending residents fleeing to safety as officials pleaded for international help to battle the blazes. Although the fires’ immediate cause remains unknown, the Lebanese Agricultural Research Institute earlier this month warned of a “very high” potential of forest fires owing to the ongoing heat wave. This week, 150 communities are at high risk for wildfires, mostly in Mount Lebanon and the country’s north, according to the government’s Impact platform.

Lebanon’s residents are braced for a week of protests and marches as Wednesday marks a year since a massive explosion at the Beirut port killed more than 200 people and devastated whole neighborhoods of the capital. With many victims still reeling, Lebanon’s political class continues to evade investigation in relation to the case, and no top-level officials have been held accountable. Tardy and vague gestures of willingness to comply with the investigation came last week, with Michel Aoun telling the country’s public prosecutor he was ready to give a statement about the blast if needed and Parliament Speaker Nabih Berri saying on Thursday that the legislature is ready to lift its members’ immunity to allow them to be questioned in the case. However, neither figure made any firm commitments or offered any timeline for action. Meanwhile, Reuters reported on Friday that an FBI report shows the amount of ammonium nitrate that blew up at port last year was equivalent to a fifth of the shipment unloaded there in 2013, raising questions as to where the remainder of the shipment had been sent and by whom.

France is set to host a new international aid conference for Lebanon on Wednesday, the deadly port blast’s first anniversary. The conference is being organized with the help of the United Nations “to respond to the needs of the Lebanese, whose situation is deteriorating every day,” France said. The international community has already pledged hundreds of millions of dollars in humanitarian aid since last August.

Gunmen ambushed a funeral procession in Khaldeh, south of Beirut, killing at least two people and setting off an hourslong firefight. The violence erupted during the funeral of Ali Chebli, a Hezbollah member who was shot and killed at point-blank range while attending a wedding party at a resort in nearby Jiyyeh on Saturday night. Footage of a video broadcast on Hezbollah’s Al-Manar TV channel...