Hecatomb of carp in Lake Qaraoun: Multiple scenarios, but no clear explanation

Although the reasons behind the hecatomb continue to be debated, officials and experts have come together to decide on how to safely handle the dead fish. Eighteen people have been apprehended for stealing and selling poisoned fish. 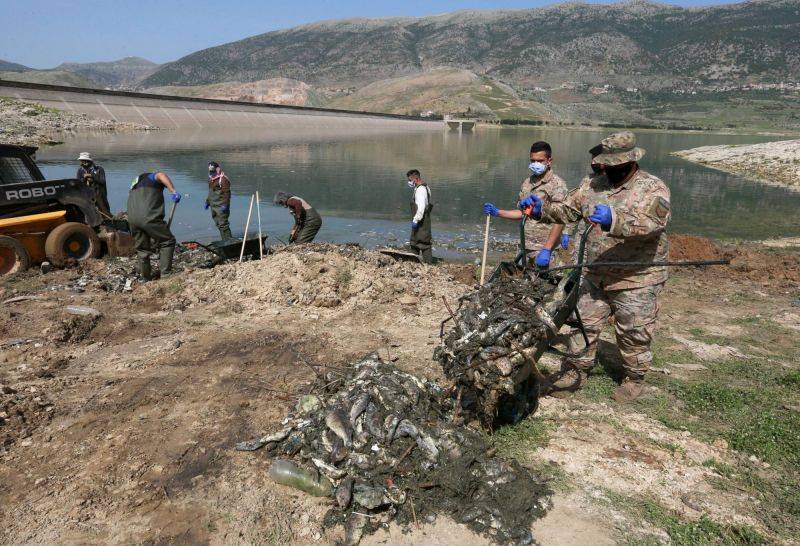 The army and volunteers clean the banks of Lake Qaraoun. (Credit: Aziz Taher/Reuters)

Thousands of dead carp have floated to the surface of Lake Qaraoun and washed up on its banks, sparking ire among Lebanese for days now.

But the reasons behind this new environmental scandal have yet to be elucidated. Images of the dead fish that circulated on TV and social media sent shockwaves across the country, which were exacerbated by the latest figures provided by the director of the Litani River Authority, Sami Alawieh.

Alawieh estimated that 124 tons of carp had perished in the lake, which is known for its high pollution levels.

What could have engendered such a hecatomb?

Alawieh explained to L’Orient-Le Jour that no cause has been fully established yet.

“A first appraisal performed at our request suggested an abrupt slump in oxygen levels due to the spread of one of the pollutants in the lake,” he said.

“However, we have measured the oxygen levels and, according to our calculations, they are not sufficiently low to be lethal to fish,” he added.

“Some experts [have noted as a possible cause] a period of heightened vulnerability during the breeding season, and others cite an abnormal proliferation of cyanobacteria, a harmful pollutant seen in stagnant water, that could have intoxicated the carp. Lastly, some experts suggest that the spring viraemia of carp virus, which is a virus specific to carp, could have propagated across the lake.”

Alawieh said the Litani River Authority has reached out to the National Council for Scientific Research — known by its French acronym, the CNRS — for assistance in its investigation.

Commenting on the matter, CNRS Secretary-General Mouin Hamzeh told L’Orient-Le Jour that he recommended Alawieh not limit his investigation to a single possible cause, particularly the virus, because multiple reasons could be behind it.

He explained that the CNRS had obtained fish samples and will perform an autopsy, before they are sent to better-equipped laboratories abroad for further research.

“This crisis has highlighted the level of Lebanon’s brain drain,” Hamzeh said. “We had two fish specialists, a fish pathologist and a fish virologist. Both of them have moved abroad.”

According to Litani specialist Kamal Slim, the green moss spotted on the lake is an indicator of a mass proliferation of cyanobacteria.

“This year, however, besides the cyanobacterium that is familiar in the polluted environment of Lake Qaraoun, also known by its scientific nomenclature as Aphanizomenon, this year a new neurotoxic species was seen: namely, the Anabaena circinalis, which attacks the fishes’ nervous systems, paralyzing and slowly killing them. Such a hecatomb has also been observed in areas of stagnant water in other parts of the world.”

According to Slim, carp tend to gather in large shoals during the breeding season in April, which makes them more vulnerable to the bacteria. In addition, the significant variations in temperature recorded in April is another factor contributing to the vulnerability of carp. Hence, several factors would be behind such a catastrophe that spared juvenile fish and small fish, he said.

Four potential reasons would therefore be considered relevant, says Naji Kodeih, an environmental expert focusing on hazardous materials. These are the lack of oxygen, a viral epidemic, chemical poisoning or cyanobacteria-caused pollution.

“Each of these scenarios requires a research methodology [to investigate it],” he told L’Orient-Le Jour.

When poisonous carp end up served on the plate

This ecological disaster has generated other problems, including potentially disastrous public health repercussions.

In the midst of the economic crisis, these thousands of dead fish that washed up on the lake’s banks have been seen as a godsend for less scrupulous “fishermen.” As of April 20, Alawieh said, Syrian nationals from a refugee camp in the village of Qaraoun had begun harvesting these carp, whose fishing and consumption are prohibited.

“An entire trade was put in place,” he added.

“Carp were subsequently passed on to Lebanese merchants and ended up at the markets in Beirut’s Karantina and Sabra areas, or else recovered by fish farmers who added them to their ponds, passing them off as healthy fish. Some 300 kilograms of carp are estimated to have been harvested from the banks of the Litani every night. Eighteen arrests have already been made.”

On Monday, searches were conducted in the Sabra market, where carp giving off an unbearable stench and mixed with thawed fish were incinerated in situ.

However, it remains unknown what quantity of fish that came straight from Lake Qaraoun may have ended up on the plates of unsuspecting consumers. 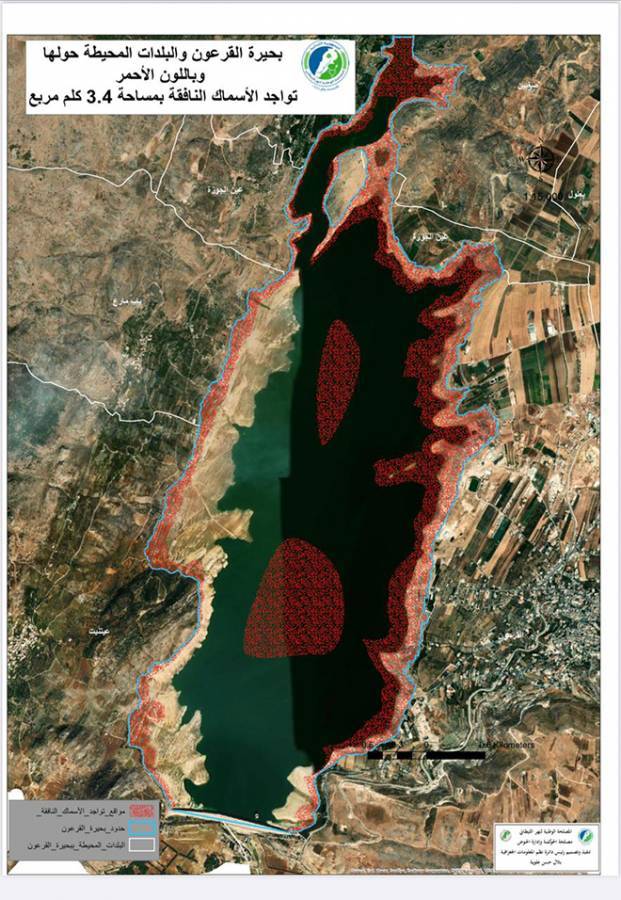 This map shows where dead carp were found and washed up on the shores of the lake (Credit: Litani River Authority)

On top of this sanitary problem, officials are currently left to collect and handle the perished fish.

“The Ministry of the Environment asked us to store them temporarily until a decision on handling them is taken,” Alawieh said.

“But I preferred to handle them in situ, since the [Qaraoun] lake area is already polluted, and it would have been unhealthy to transport this source of pollution elsewhere.”

Kodeih, whom the authorities consulted on how to handle the carp, recommended “a safe burying of poisoned fish,” he said.

“That requires adding the right quantity of quicklime and caustic soda to the tons of fish,” he told L’Orient-Le Jour.

Caustic soda helps to decompose proteins and destroy viruses and microbes. As a result, the bodies are rendered harmless to people’s health and the environment.

Kodeih said he suggested that the officials in charge of this case work out the details, and recommended that they prepare the ground for burying the tons of perished fish, along with the installation of a protective geomembrane.

Alawieh underscored that Kodeih’s recommendations will be implemented, and that the practice of adding quicklime and caustic soda to the perished fish has been adopted.

In the meantime, the Litani River Authority has been assisted by volunteers, who have been busy collecting the dead fish for several days now, as well as the army and other institutions, such as the Lebanese University.

Beyond this crisis, the issue of the endemic pollution of the Litani and the artificial lake of Qaraoun that the river feeds has once again been raised.

Hamzeh recalled that a lack of transparency and efficiency over the years that funds were allocated has prevented any progress whatsoever. He cited a law passed in 2016 to provide LL1.1 trillion for the construction of 20 wastewater treatment plants and sewer networks to serve several localities, in addition to a $55 million loan from the World Bank for the construction of treatment plants. These efforts were to no avail.

“What killed these carp needs to be made perfectly clear, of course, but that is not where the problem lies,” Hamzeh said.

“The crux of the crisis lies in the pollution of the Litani and the lake, which keeps getting worse and worse despite the warnings we issued in the past years.”

Thousands of dead carp have floated to the surface of Lake Qaraoun and washed up on its banks, sparking ire among Lebanese for days now.But the reasons behind this new environmental scandal have yet to be elucidated. Images of the dead fish that circulated on TV and social media sent shockwaves across the country, which were exacerbated by the latest figures provided by the director of the...