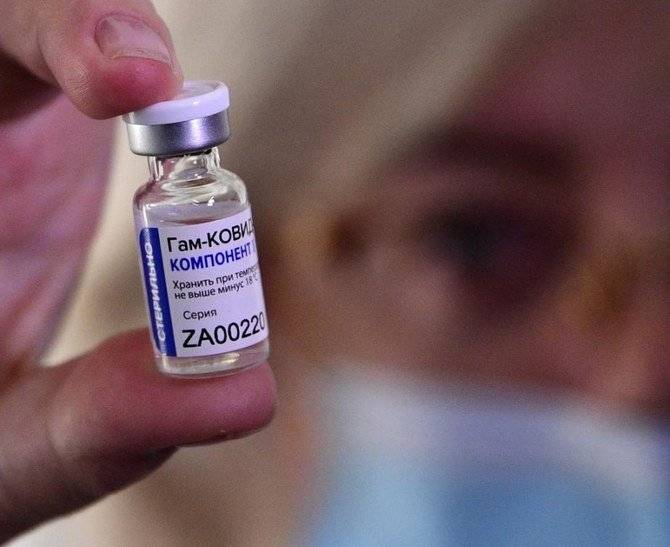 Some 20,000 doses of the Sputnik Light vaccine have already been delivered to Lebanon as a donation from Hariri via the United Arab Emirates, general surgeon and Hariri adviser Ghattas Khoury told L’Orient Today. (Credit: AFP)

BEIRUT — Prime Minister-designate Saad Hariri is importing a Russian one-shot COVID-19 vaccine to Lebanon, despite it not being approved by the national vaccine committee.

His party, the Future Movement, has already begun registering people for vaccines via party offices across the country, on the promise that Hariri would secure the inoculations.

In a statement over the weekend, the party’s Akkar office announced that Hariri had succeeded with the so-called Sputnik Light vaccine, by “touring the world in service of Lebanon and its people.”

Some 20,000 doses of the vaccine have already been delivered to Lebanon as a donation from Hariri via the United Arab Emirates, general surgeon and Hariri adviser Ghattas Khoury told L’Orient Today, with more to arrive in the months ahead.

“We want to kick off the economy and get people back to work, and to do so, we need more vaccines,” Khoury said. “This is what we are trying to do.”

Lebanon’s national inoculation campaign has been dysmally slow, with only a 2.7 percent of the adult population having received two doses of the vaccine so far, according to the Health Ministry’s latest report.

The Sputnik Light vaccine is the first dose of the Sputnik V vaccine that is currently being rolled out in Russia, Lebanon and dozens of other countries. Like the AstraZeneca vaccine, Sputnik V is an adenoviral vector vaccine, meaning it uses inactive viruses to deliver the genetic code for the spike proteins of COVID-19, provoking an immune response in the body.

According to its manufacturer, the Gamaleya Institute, early stage trials for the single shot vaccine have found its efficacy in reducing disease to be around 70 percent, compared to Sputnik V’s 91.6 percent in interim phase three trials.

However, it is estimated to provide protection for only around four months, according to Alexander Gintsburg, the Gamaleya Institute’s director.

Russia’s sovereign wealth fund has said that the two-dose vaccine will remain the primary vaccine used in the country, while the one-dose version will be promoted for use abroad, especially in countries experiencing high levels of the coronavirus.

“People will likely have to get a second dose further down the line,” said Future Movement vice-president Mustapha Allouche, arguing that this is not an issue as other vaccine manufacturers are already recommending booster shots of their jabs.

Last week, the CEOs of Moderna and Pfizer announced that people that received their vaccines would likely need a top-up, and the United Arab Emirates has advised that some people may require a third dose of the Sinopharm vaccine.

What is essential, however, is that “people receiving this vaccine should be clearly informed that this is only a short-term solution,” said Jade Khalife, a physician specialized in health systems and epidemiology and a member of the Independent Lebanese Committee for the Elimination of COVID-19 (ZeroCovidLB).

“Otherwise, their protection will decrease and [this will] altogether harm population immunity,” he added. “I am worried about follow-up.”

Although 20,000 doses of Sputnik Light have already arrived in Lebanon, it has not yet been approved for use. In Russia, its manufacturers applied for its registration with the country’s Health Ministry on March 29, but it has so far not been granted.

“We are now waiting for the [Russian] Health Ministry to authorize the vaccine before administering it,” Khoury said, saying he hoped approval would be quick as Sputnik Light “is not a new vaccine, just one dose of Sputnik V.”

The potential approval of the Sputnik Light vaccine was discussed in a meeting of the national COVID-19 vaccine committee on Tuesday afternoon, but members decided to hold off on authorization, according to Jacques Mokhbat, an infectious disease specialist who sits on the committee.

“It has not yet been approved in its producing country, so we decided that it is not recommended in Lebanon for the time being,” he said, adding that if and when the Russian authorities approve it, they may reconsider.

For Khalife, what is more worrying than the lack of final stage trials and formal approval is the potential for political exploitation and a patchy, inequitable vaccination campaign.

“It is concerning that political parties could engage in clientelism with COVID-19 vaccines, because it risks harming the goal of the national vaccine drive” and may leave gaps in overall vaccine data, he said.

Though other politicians and politically affiliated organizations have purchased and distributed vaccines, the Future Movement’s campaign appears to be the most organized and widespread, with municipalities and party offices registering people up and down the country.

In Akkar, around 4,000 people have signed up for vaccinations via the party, according to regional coordinator Abdallah Zakaria.

Khoury said that vaccines donated by Hariri will be distributed according to priorities set out by the Health Ministry — i.e. distribution will begin with the elderly and those with chronic health conditions.

However, he was contradicted by Allouche and Zakaria, who said the first raft of recipients would include party members, supporters and state institutions such as the security forces.

“We don’t have a guarantee that if we give someone a vaccine they will vote for us,” Allouche said. “Hariri is doing this for the safety of the entire community.”

While Zakaria said that winning political favor was not the primary aim of the Future Movement’s campaign and that he had signed up many people who were not party supporters, there was political gain on offer.

“Forgive me, but at the end of the day, we want to benefit from this.”

BEIRUT — Prime Minister-designate Saad Hariri is importing a Russian one-shot COVID-19 vaccine to Lebanon, despite it not being approved by the national vaccine committee.His party, the Future Movement, has already begun registering people for vaccines via party offices across the country, on the promise that Hariri would secure the inoculations. In a statement over the weekend, the party’s...