Only 14 families of those killed in the Beirut port blast have started to receive a paltry monthly compensation payment. The other 62 families continue to wait for their files to be approved in order to be eligible for the payment. 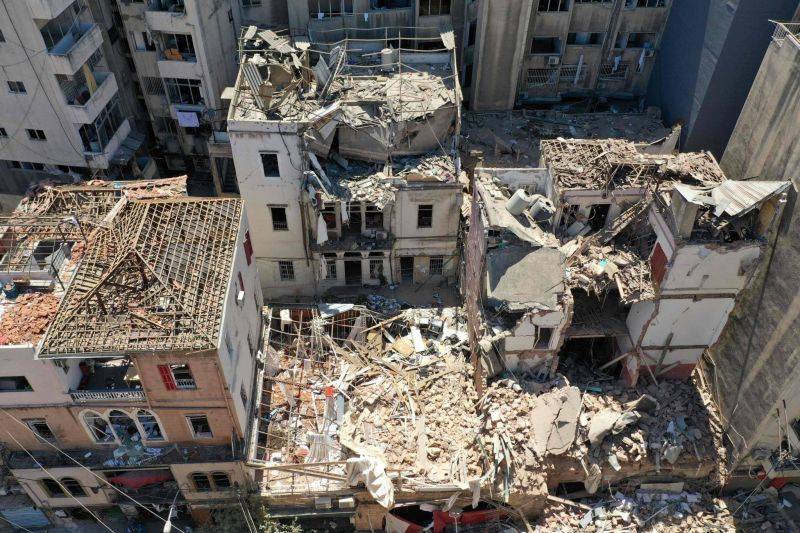 An aerial picture taken on Aug. 9 of the destruction caused in the Gemmayzeh area by the Beirut port explosion five days earlier. (Credit: AFP)

Eight months have passed since the shattering Aug. 4 explosion at the Beirut port that killed more than 200 people. Yet, only 14 families who lost one of their own have begun to receive the monthly payments allocated to the victims’ relatives under a decision that treats those killed as “martyrs of the Lebanese army.”

Under a law passed in December 2020, the families of the civilians who lost their lives in the blast qualify to benefit from a monthly payment of LL1,291,000 — or approximately $100 at the current parallel market rate — a sum equivalent to what is paid to the families of soldiers who die while on duty.

This compensation is no more than a pittance given the scale of the deadly explosion, the precise circumstances of which have yet to be determined.

The remainder of the victims’ relatives continue to wait for their cases to be approved by the competent authorities in order to receive payments.

Youssef Mawla, whose son Kassem worked at the port and was killed there on Aug. 4, is one of the new beneficiaries of compensation.

“We are among the 14 families who began receiving payments at the beginning of the month, with retroactive pay to July 2020. The files of the other 62 families are still being examined by the authorities,” Mawla tells L’Orient-Le Jour.

He went on to say that “Kassem was 26 years old and got married only 29 days before the explosion. Money will not bring back our dead, but we insist on getting this financial aid, especially for [the victims] who left behind their families and children without any resources.”

Parliament decreed that the civilian victims of the port explosion be considered “martyrs of the army killed while performing their duty” rather than fallen soldiers who died on the battlefield — something that would have granted their families additional allowances, such as financial aid for education or priority if their children wish to join the military.

Mawla, however, assures that the “authorities a few days ago approved medical treatment and aid for education for the victims’ children.”

According to the law for the compensation of victims, people who have become physically disabled as a result of the explosion, “will be registered for life at the National Social Security Fund (NSSF), and will also benefit from the same aid, rights and exemptions dedicated to people with special needs.”

The victims disabled by the port explosion, however, will not benefit from monthly payments for the time being.

“About 160 among the 200 people who died in the Beirut port [explosion] were Lebanese,” Mawla says.

According to him, the delay in the monthly payment to these dozens of affected households was due to the fact that putting together a file to be approved by the authorities proved a difficult ordeal for the bereaved families. This could explain why the process took months to get started.

“The administrative procedures were long and difficult. We had to get tons of documents and we were asked for the original papers every time. But the state only provides one original document at a time. So, we had to go through the same procedures a dozen times,” Mawla explains.

Among the many documents required to be eligible for compensation, the families of the victims had to provide a death certificate, a forensic doctor’s certificate and even a police report.

These families also received a once-off sum of LL30 million each, paid by the Higher Relief Commission, besides the monthly payments allocated to the “martyrs of the army.”

“These amounts were distributed to the families as soon as they were transferred to us by the Finance Ministry,” a source from the Higher Relief Commission tells L’Orient-Le Jour on condition of anonymity.

‘We must be united’

Majid Helou is the father of Nicole, 25, a bank employee who died while meeting with friends for coffee in a building near the port.

Helou was also among those who received LL1,291,000 earlier this month.

“My wife and I share this sum, but what matters to us is to know who killed our children […]. If big names must be brought to justice, then this should be done. Otherwise, we are determined to attack their homes. We will not accept that only a few [low-ranking] officials be investigated,” Helou tells L’Orient-Le Jour.

“This country belongs to its youth. It is not acceptable that our children are killed. We have to settle accounts,” says the father of the young victim.

“We have to be united. People need to understand that another tragedy could happen and this time it could affect them as well,” he adds.

For his part, Mawla says that “the investigation is ongoing, but we have learned that the director-general of Customs, Badri Daher, may be released soon.”

“We are well aware that no one will ever tell us what really happened at the Beirut port, but we will not remain silent,” he adds.

In addition to the hundreds of civilians who lost their lives in the blast, the Beirut Fire Brigade lost 10 of its members. All 10 were killed on the spot when the explosion went off. These victims were not considered “martyrs of the Lebanese army.” Their status as civil servants, however, allowed their families to benefit from indemnities.

“The families of the 10 deceased firefighters were granted financial compensation by the municipal council of the city of Beirut, as well as medical insurance to be paid by the municipality,” Elie Andrea, vice-president of the Beirut Municipality, tells L’Orient-Le Jour.

He, however, refrains from specifying the exact amount received by each family.

“Their relatives will also receive monthly payments, but we are waiting for the approval of the Interior Ministry to this effect,” Andrea adds.

Eight months have passed since the shattering Aug. 4 explosion at the Beirut port that killed more than 200 people. Yet, only 14 families who lost one of their own have begun to receive the monthly payments allocated to the victims’ relatives under a decision that treats those killed as “martyrs of the Lebanese army.”Under a law passed in December 2020, the families of the civilians who...