‘I feel like a bad parent’: Beirutis adapt their shopping practices to a new economic reality 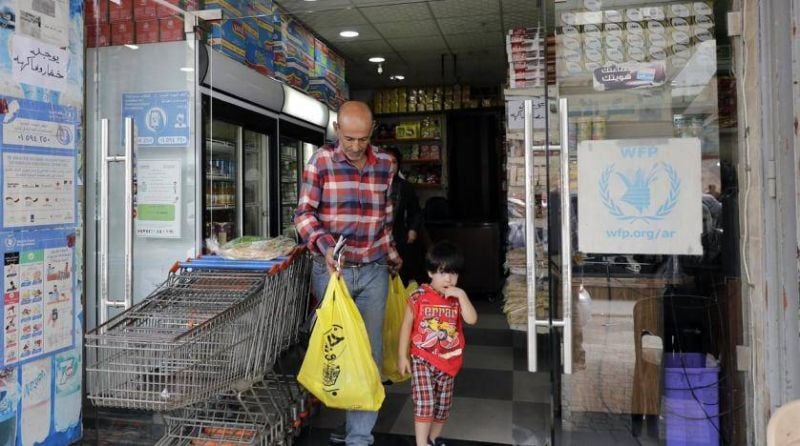 Many people now go to the store daily to buy just enough food to meet their needs for the next 24 hours. (Credit: AFP)

BEIRUT — As Lebanon’s currency collapses, prices are rising and goods shortages are rife, leading residents to adjust their lifestyles to a new set of circumstances.

For many, this means living day to day — buying just enough food and fuel to get through the next 24 hours. For others, it entails eliminating all non-essential items from their grocery lists and using whatever connections they have to fill their cars with gasoline before prices rise further or supplies run out.

“I get food according to how much I make that day, and I make around LL50,000 a day,” a taxi driver in the southern suburbs of Beirut told L’Orient Today, adding that when he fails to make sufficient money on any given day, his family goes without dinner.

A Mazraa resident said his household simply cannot afford to stock up on foodstuffs. “Given the rise in prices, you now need around LL950,000 to stock food for a month. Our budget doesn’t meet that amount,” he explained.

The Lebanese lira has lost more than 85 percent of its value since it started to deviate from the official peg of LL1,507.5 to the US dollar in mid-2019. Today, the exchange rate on the parallel market hovers around LL12,000 to the dollar.

In addition to increased prices, shortages in items available in shops are precluding people’s ability to stock up on goods.

Anissa, who works as an office assistant, said she supplies her household’s food needs on a “day-to-day basis, because the grocery stores are limiting how much products we can buy. So foodstuffs available on one day are missing on other days.”

An Ain al-Mreisseh local, who works as an analyst, also said that her household’s efforts to stock up on food are thwarted by the limited quantities of ingredients available in stores.

For others, the contents of their grocery cart has changed dramatically. Before the onset of the economic crisis, meat, chicken and cheese were staples purchased in bulk on a weekly or monthly trip to the supermarket. Now these are deemed too expensive to buy in large quantities, meaning shoppers instead stock up on less expensive staples, like beans and rice.

Sara, a school teacher in the southern suburbs of Beirut, said she now only purchases lentils and rice in larger volumes, and buys other food items on a daily basis, based on what her family is having for lunch on a particular day. She also says she now makes a narrower variety of food for her household.

“I used to prepare two main courses per day, because we are a big family and each one has his or her meal preference. But now we are having one meal on our lunch table and are cutting out desserts and snacks,” she explained.

For one shop owner in Hamra, a daily trip to a crowded supermarket presents too high a COVID-19 exposure risk; therefore, he told L’Orient Today, he tends to stock up when he goes shopping but is very budget conscious as he fills his shopping cart.

“Given our tight budget, we don’t get chocolate, biscuits and chips for the kids anymore,” he said, adding, “We also stopped having chicken and meat on a daily basis and we stick to one type of cheese, the cheapest one available. I feel like a bad parent.”

A housewife in Hamra said her family no longer buys labneh, goat cheese or the popular processed cheese spread Picon. Their only option now is Almarai, an inexpensive locally produced cream cheese spread.

Tariq al-Jadideh resident and factory worker, Sanaa, said she has had to deploy strategic management to be able to supply her household’s basic food needs.

“We shop on a daily basis, and I only stock up on subsidized products [in order] to decrease our expenses. We don’t get imported products anymore, there are local copies emerging and we are buying those,” she said.

Residents are facing similar challenges in their efforts to keep their cars running as fuel prices rise and fears of supply shortages cause many gas stations to limit customers to a maximum fill of LL20,000 worth of fuel per visit.

As a result, many drivers L’Orient Today spoke to in the Mazraa, Ain al-Mreisseh, Hamra and Tariq al-Jadideh neighborhoods and in the southern suburbs of Beirut return to the gas pump daily, buying just as much petrol as they can afford to get them through the day — and when funds and fuel run out, they walk.

“On some days I don’t have enough fuel in my car [so] I go to work on foot,” said Anissa from Tariq al-Jadideh.

Others use what wasta, or connections, they have to stock up on fuel in anticipation that prices will continue to rise.

“I know a gas station owner in the south and he allows me to fill my car for more than LL20,000,” a pharmacist from Beirut’s southern suburbs said. “I prefer to keep my car full with gasoline because you don’t know when the prices might increase again or whether the country might witness a drastic shortage.”

Sanaa from Tariq al-Jadideh said her uncle owns a gas station and that he gives her a call when the station is not jammed with cars so she can come and fill her tank with as much gas as she wants.

Fuel price increases are also affecting electricity generator costs, a major concern for many residents as state power blackouts may reach up to 22 hours per day amid difficulties and delays in securing fuel to run power stations.

For one Ain al-Mreisseh resident, this has meant facing a stark choice: pay more for the generator or live in darkness during blackout periods.

“Honestly, I chose the blackout option. With the increase in prices, we barely have enough money to buy food,” the resident said.

BEIRUT — As Lebanon’s currency collapses, prices are rising and goods shortages are rife, leading residents to adjust their lifestyles to a new set of circumstances.For many, this means living day to day — buying just enough food and fuel to get through the next 24 hours. For others, it entails eliminating all non-essential items from their grocery lists and using whatever connections they...