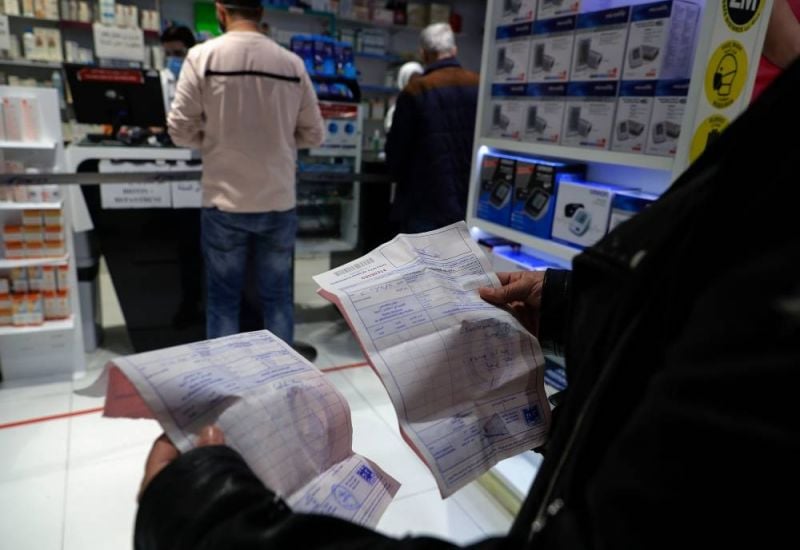 A customer readies prescriptions as he waits to buy medicine at a pharmacy in Beirut. (Credit: Joseph Eid/AFP)

BEIRUT — Starting around her home in Chiyah, before driving over to Hazmieh and then to Hadath: this is the route Sabine follows in search of psychiatric medications for her daughter, Lynn, who has a major depressive disorder.

Eight pharmacies later, she finally finds the medication her daughter needs. If this drug hunt continues, she said, “I am going to need stress relievers for myself.”

Sabine, who does not want to reveal her last name because of the stigma associated with mental health disorders in Lebanon, is one of the growing number of people unable to obtain their medications due to shortages in pharmacies.

One pharmacist in Beirut told L’Orient Today that there is currently a shortage of all psychiatric medications, such as tranquilizers and antidepressants.

Over the past year, as the Lebanese lira has plummeted in value, psychiatric medications have gradually begun to disappear from pharmacy shelves, according to Sami Richa, the head of Hotel Dieu's department of psychiatry and president of Lebanese Psychiatric Society.

Elizabeth Mougharbil is facing similar problems with mood stabilizing medications for her partner. Shortages have forced her into asking family and friends coming from abroad to bring along the drugs absent from the shelves of pharmacies.

“Even generic medications are missing from the pharmacies,” Mougharbil said.

“People with mental health illnesses should not undergo the unnecessary pressure of having to find medications, this only adds to their stress,” said Joseph El Khoury, assistant professor at the American University of Beirut Medical Center and president-elect of the Lebanese Psychiatric Society.

With options limited due to dwindling supplies, psychiatrists have resorted to prescribing different formulas of medications for their patients while acknowledging they might not be effective, El Khoury added.

“Obviously, this is problematic because a lot of patients have one specific medication that treats their illness, one that can’t be substituted,” he said.

Rabih Chemmay, the head of the National Mental Health Program, said that there are three main reasons behind psychiatric medications’ shortage in Lebanon: panic buying and hoarding, smuggling of drugs out of the country and financial issues faced by pharmaceutical importers.

Lebanon is reliant on imports for pharmaceuticals due to a weak and unsupported local drug manufacturing market, explained Hassan Nasser, a mental health pharmacist working with International Medical Corps, a health-sector NGO.

With the country facing a severe crunch in dollar liquidity, the central bank in Oct. 2019 rolled out a mechanism to subsidize 85 percent of import bills for medicine. The cumbersome process to acquire these subsidized dollars takes at at least three months, according to Karim Gebara, the head of the pharmaceutical importers’ syndicate.

Moreover, concerns have grown over how long Banque du Liban’s subsidies on essential items can last, with the central bank governor repeatedly sounding the alarm on its shrinking reserves.

Gebara told L’Orient Today that people are hoarding pharmaceuticals out of fears the subsidies will soon come to an end. The pressure on medicine supply and demand is also impacted by smuggling, according to Order of Pharmacists head Ghassan Al Amine, who noted subsidized psychiatric medications can fetch higher prices outside Lebanon.

All of this comes at a time when the residents of Lebanon are facing unprecedented strains on mental health.

Statistics from Embrace LifeLine, Lebanon’s first emotional support and suicide prevention hotline, reveal a dramatic increase in the number of calls: from 270 in December 2019 and 349 in January 2020 to 500 and 565 in the same months a year later.

There are two types of patients today: those who had stable mental health cases prior to the economic crisis, the COVID-19 pandemic and Aug 4. Beirut explosion, and others who developed mental health issues following these traumatic events, Richa said.

“The reason we are witnessing an increase in psychiatric medications’ demand is that new cases developed and the old cases that were stabilized relapsed as a result of the events as well,” he added.

Al Amine said that distributors and importers of pharmaceuticals are not supplying enough medications to keep up with demand.

Gebara explained that the amount of imported psychiatric medications is unchanged, but companies are unable to provide more to meet rising demand.

“Where we receive 100 customers asking for psychiatric drugs, we can only cover the demand of five,” the Beirut pharmacist said. “We have people coming from the south and north asking for mental health drugs.”

El Khoury estimated that as much as “90 percent of psychiatric medications are short [in supply], even ones that treat Alzheimers.”

Those unable to obtain psychiatric medications are resorting to associations, hospices and hospitals, but these entities are often unable to help. SANAD Hospice and International Medical Corps said that they have been unable to secure medications for their beneficiaries.

Souraya Itani, whose mother suffers from Alzheimer’s disease, said that she had reached out to relevant associations for help finding her medication, but in vain.

She had to resort to placing orders at multiple pharmacies only to have the medications delivered two to four weeks later.

“Imagine waiting almost a month for drug tablets that get consumed in three days,” she said. “I have resorted to storing medications, whenever I find any, because this is the only way to cope.”

El Khoury warned the worst for psychiatric patients could be yet to come.

“We are still managing with what is left in the market,” he said. “But we did not witness the peak of the crisis.”

BEIRUT — Starting around her home in Chiyah, before driving over to Hazmieh and then to Hadath: this is the route Sabine follows in search of psychiatric medications for her daughter, Lynn, who has a major depressive disorder.Eight pharmacies later, she finally finds the medication her daughter needs. If this drug hunt continues, she said, “I am going to need stress relievers for myself.”...