As international monitors call for a 'zero wasta' inoculation campaign, AUB staff are accused of skipping the vaccine line 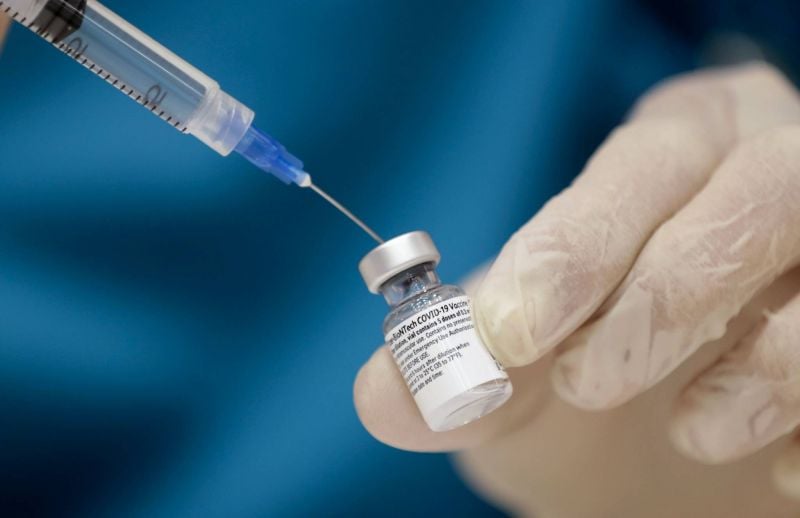 A healthcare worker in Lebanon prepares a dose of the COVID-19 vaccine. (Credit: AFP)

BEIRUT — On Sunday, the nationwide COVID-19 vaccination campaign kicked off with great fanfare in three Beirut hospitals, as international monitors cautioned against the potential role of cronyism in the distribution of doses.

However, just a day after inoculations began, one of these three hospitals — the American University of Beirut’s Medical Center — was accused of vaccinating staff members according to wasta, or personal connections, rather than medical necessity.

The controversy began after a photograph was published of Fadi Ghorayeb, a security official at the American University of Beirut, receiving the vaccine under the watchful gaze of university president Fadlo Khuri.

Ghorayeb, a former general in the Lebanese army and member of the presidential guard, joined AUB as chief of protection in October 2018.

As the image gained traction on social media, the World Bank’s regional director Saroj Kumar Jha tweeted that he had asked monitors from the International Committee of the Red Cross and Red Crescent Societies (IFRC) to investigate the incident, using the hashtag #nowasta.

At almost the same time, AUBMC released a statement in response to the controversy saying that everyone who received the first dose of the vaccine did so according to priorities listed by the Health Ministry and the US Centers for Disease Control and Prevention.

In the Health Ministry’s vaccination plan, those who should be vaccinated first are people over 75 years of age and high-risk healthcare workers, including those in emergency departments, COVID-19 units and laboratory staff.

Security staff and administration are listed as low-risk healthcare workers and should therefore be up for receiving the vaccine at a later stage.

In addition to Ghorayeb, several security officers and members of the administration at AUB Medical Center also received vaccines on Sunday, Abir Salam, AUBMC’s communications manager, told L’Orient Today on Tuesday. She could not provide an exact number.

“This is outrageous and infuriating,” said one AUB faculty member who asked to remain anonymous out of fear of retaliation. “Whether you agreed with them or not, the priorities for vaccination are very clear.”

The World Bank, which is providing $34 million in funding for the initial rollout of inoculations, is playing an active role in monitoring the vaccination campaign along with the IFRC, saying in a joint statement Friday that they would ensure the “safe handling of vaccines, as well as fair and equitable access to all.”

Even before the plane carrying the vaccines touched down at Beirut’s airport on Saturday, reports had already emerged that politicians were trying to pressure health authorities for priority access to vaccinations, only to be rebuffed by the World Bank.

At AUBMC, Salam insisted that all of those who were vaccinated on Sunday are at high risk of contracting COVID-19 in the hospital setting and did not get called upon due to connections or favoritism.

“General Ghorayeb and the security team are part of the frontline as they often greet patients when they arrive at the hospital,” she said.

The faculty member rejected this argument as “nonsensical,” saying, “Everyone is in contact with COVID-positive people nowadays.”

Nevertheless, Salam admitted that some of those who had received jabs on Sunday had been vaccinated earlier than they would otherwise have been. This, she said, was in part due to glitches with the Health Ministry’s online vaccination platform that meant staff no longer had access to the full list of those signed up to receive their first dose.

During visits by L’Orient Today to two vaccination centers on Monday, the platform was still causing issues, forcing staff at RHUH to resort to manually recording the details of vaccine recipients and delaying vaccine appointments at St. George Hospital, more commonly known as Mustashfa Roum.

At AUBMC on Sunday, staff “had to take the right action in the proper time to avoid throwing the vaccines away,” Salam said. Once thawed from ultra-cold storage and diluted with saline solution for injection, the Pfizer-BioNTech vaccine must be used within six hours, otherwise it should be discarded.

In response to a question on what action staff had taken to select those who would be vaccinated, Salam said that AUBMC was “abiding by the ministry’s priorities.”

Neither the World Bank nor the IFRC immediately responded to requests for comment on the status of their investigation.

BEIRUT — On Sunday, the nationwide COVID-19 vaccination campaign kicked off with great fanfare in three Beirut hospitals, as international monitors cautioned against the potential role of cronyism in the distribution of doses.However, just a day after inoculations began, one of these three hospitals — the American University of Beirut’s Medical Center — was accused of vaccinating staff...