Aid checks were given to families of the victims of the Beirut port blast ... but banks wouldn't cash them 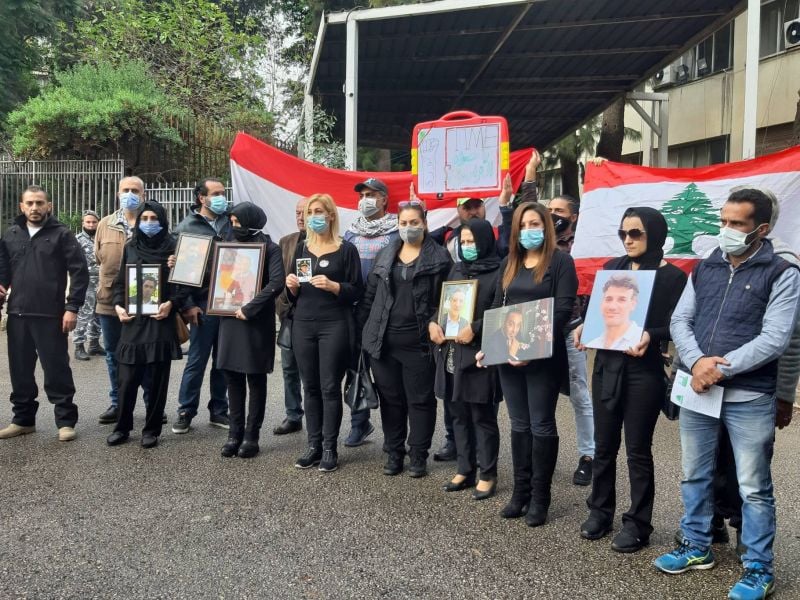 Families of victims of the Aug. 4 explosion protest in front of Beirut's Justice Palace. (OLJ/Abby Sewell)

BEIRUT — More than three months after the Beirut port explosion, aid has been slow to reach some of those most affected, including the families of those killed in the blast.

While the Lebanese Army began distributing cash payments late last month to owners of homes damaged in the Aug. 4 explosion, families of the victims received checks via the Higher Relief Committee that, because of banking restrictions resulting from the country’s financial crisis, many of them have been unable to cash.

“About a month after the explosion, they told us, ‘Get your papers together and apply’ … and then no one was getting the money at all,” said Kayan Tleis, the head of the Committee of Families of Beirut Port Martyrs and the brother of Mohammad Tleis, who was killed in the explosion.

After submitting documentation proving their family relationships and the victim’s cause of death, each family was given a check for LL30 million (currently worth about $4,000 at the black market exchange rate), with the first checks distributed about three weeks ago. But then came the problem of cashing them.

For those with bank accounts in which they could deposit the checks, new banking restrictions limit the amount that they can withdraw each month, even in Lebanese currency. But the greater issue was for families with no bank account, as banks will not cash checks for non-account holders and have also largely frozen opening new accounts, Tleis said.

“Every time they would go to a bank, the bank would say, ‘We can’t open an account,’” Tleis said. “OK, how is the Higher Relief Committee giving out checks that no one can cash?”

The secretary-general of the High Relief Committee, Maj. Gen. Mohammed Kheir, defended the decision to give the payments in checks, noting that it is standard practice for most government transactions.

Kheir said the problem has been resolved, since the Lebanese Swiss Bank had agreed to assist the families. The bank issued a statement last week saying it would cash the checks, but Tleis said it remains to be seen how that will work in practice.

Nizar Saghieh, the executive director of Legal Agenda, which has been tracking the issue, said the government should have anticipated the potential problems with the banks and made arrangements before issuing the checks, which were intended as relief payments to help families that had, in many cases, lost their breadwinners and had incurred the cost of burying their loved ones.

“When it’s relief for victims, you cannot say, ‘It’s not my business, it’s the business of the bank’ — you have to know,” he said. “You cannot pay them without having any consideration for the actual practice. … The check is no longer a valid payment tool [in Lebanon], because when you are paid with a check, you are never guaranteed to get the cash.”

Apart from the banking issue, some of the families refused to take the checks in the first place, fearing that they would be giving up their rights to seek further compensation. The families have been pushing for a decree — promised but not yet delivered by policymakers — that would give the port blast victims equal treatment to soldiers killed in the line of duty, providing ongoing support to their families.

“The state is responsible. It blew them up on land owned by the state. Don’t make a mockery of us with LL30 million and think you’re done,” said Abbas Ismail, the father of port victim Ali Abbas Ismail, who joined a group of other families protesting in front of the Justice Palace.

Kheir said the LL30 million was considered as an aid payment and not as compensation for the death of the victims, but said he was unsure what future compensation would be offered to the families.

Apart from the checks issued to victims’ families, the army was tasked with distributing a total of LL100 billion in cash to owners of damaged homes.

The amount is small in comparison to the need — by the Army’s own estimation, the payments will cover just under a quarter of an estimated LL427.6 billion in damages. While officials said the LL100 billion was intended to be only the first phase of aid distribution, with more to follow, it will depend on the funding available. Regarding the source of the funding, a spokesperson for Banque du Liban could not say whether the central bank had printed money for the first distribution.

Saghieh noted that the criteria for who was and was not receiving payment in the first round was not clear, and that some homeowners had reported receiving only a small percentage of what they actually paid for in repairs, while others received more than what they had spent.

“You can understand [the discrepancies] to some extent but you would prefer that it is done by a civil administration and not by the army,” he said.

Meanwhile, most of the post-explosion aid has not gone through the government at all. After the port explosion, international donations poured in to help with the immediate humanitarian response. With international donors wary of giving money directly to the Lebanese state, this aid went largely to UN agencies and international NGOs, while smaller local NGOs and initiatives launched their own fundraising efforts.

While significant, the international aid provided to date has also fallen short of the need.

An appeal for funding launched by the UN has brought in some $128.6 million in pledges, out of $354.9 million requested. Of that, $52.8 million has actually been paid to date, with the rest being committed but not yet paid.

A donor conference convened by France in the immediate aftermath of the explosion reportedly drew pledges of 253 million euros (about $300 million), but there have been no official reports as to how much of the pledged funding has actually been received. A spokeswoman at the French Embassy in Beirut was also unable to provide information on the status of the funds.

BEIRUT — More than three months after the Beirut port explosion, aid has been slow to reach some of those most affected, including the families of those killed in the blast.While the Lebanese Army began distributing cash payments late last month to owners of homes damaged in the Aug. 4 explosion, families of the victims received checks via the Higher Relief Committee that, because of banking...