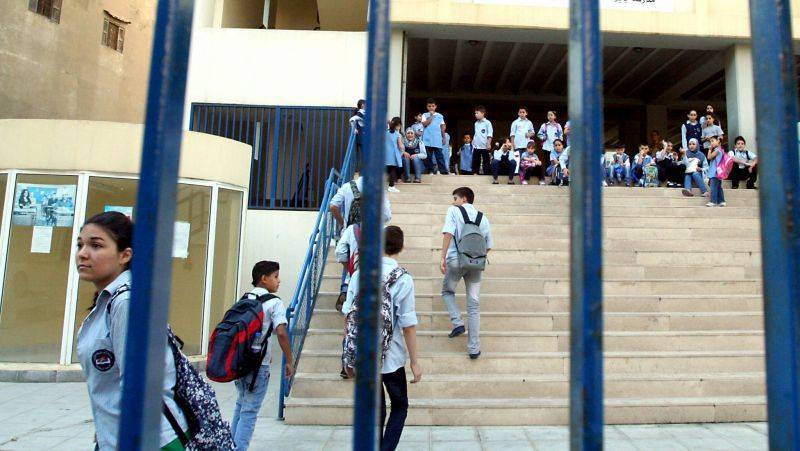 BEIRUT — Lebanon’s education system is facing an unprecedented barrage of crises, but schools had troubles long before the latest series of setbacks.

While the country has a relatively high literacy rate of 95 percent among adults, international assessments have found that Lebanese students lag behind the average for other countries at a similar level of development when it comes to learning.

A World Bank assessment released earlier this year calculated that while the average Lebanese student undergoes 10.2 years of schooling by the age of 18, the actual amount of learning is equivalent to 6.3 years. That’s below the median for the Middle East and for other upper middle income countries around the world.

“There was already a learning crisis in the country before the socio-economic situation and the COVID outbreak,” said Hana El-Ghali, the director of the Education and Youth Policy research program at the American University of Beirut’s Issam Fares Institute. “That learning problem was already there. It only became worse now with the socio-economic situation, because more people became poor and could no longer afford access even to public education.”

Lebanon’s school system includes public and private schools overseen by the Ministry of Education and a separate system of schools run for Palestinian refugees by UNRWA, as well as a network of uncredentialed informal schools, many of them serving Syrian refugees who were unable to enroll in public schools.

Total government expenditure on education — which averaged about $1.2 billion annually from 2013-15 — is roughly equal to the amount spent by families on tuition for private schools, averaging around $1.3 billion.

Public schools have suffered from dilapidated infrastructure and a lack of qualified teachers. Even before the Aug. 4 Beirut port explosion, which damaged around 200 public and private schools, the Ministry of Education said over a third of public schools were in bad condition and needed major rehabilitation.

The public school system has also faced criticism for relying on outdated curriculum and teaching methods — with a focus on rote memorization over comprehension. And while corporal punishment is officially banned, studies have found that it remains common.

Because of widespread perceptions that private schools offer a better quality of education, most Lebanese families send their children to private schools.

Between the 2011-12 and 2016-17 school years, an average of five public schools closed each year. Now, however, the demand on public schools is growing: Every year since 2014-15, public schools have seen an increase in the number of Lebanese students enrolled.

The Education Ministry has not yet released registration statistics for the 2020-21 school year, but it is widely expected that there will be a major shift from private to public schools due to the economic crisis that has reduced many families’ ability to pay school tuition.

Ghali noted, however, that the current circumstances are also likely to lead to a higher dropout rate among vulnerable students attending public schools: “An increase in [enrollment in] public schools may not happen even if you have a large increase in transfers from privates, because you may have a dropout that will mask this increase.”

The current crises are also likely to exacerbate existing problems in access to education for refugee children.

In the first couple of years of the Syrian civil war, refugee children in Lebanon had little access to formal education. Beginning in 2013, the Education Ministry opened up a special “second shift” of afternoon classes for Syrian refugee students. As it became clear that the crisis in Syria would be protracted, and as the number of refugees in Lebanon increased, the internationally funded Reaching all Children with Education program was launched in 2014.

The campaign was, to a large degree, successful. From the 2012-13 school year, when 29,300 non-Lebanese, mostly Syrian, students were enrolled in Lebanese public primary schools, the number increased to 213,358 in 2017-18, with about 72 percent of them enrolled in second-shift classes and the rest in the morning shift along with the Lebanese students.

But since then, amid increasingly desperate economic circumstances, school funding issues and bureaucratic obstacles that have prevented some Syrian children from registering, the gains have begun to reverse.

Even before the crisis, nearly half of school-age Syrian refugee children in Lebanon were not enrolled in formal schools.

Now, with the worsening situation in the country, Mokuo warned the number is likely to rise, as more children will drop out to work and help to support their families.

“The ongoing economic situation is giving more stress to those children, so we can assume there will be more dropout of those students,” she said.

BEIRUT — Lebanon’s education system is facing an unprecedented barrage of crises, but schools had troubles long before the latest series of setbacks.While the country has a relatively high literacy rate of 95 percent among adults, international assessments have found that Lebanese students lag behind the average for other countries at a similar level of development when it comes to...