No, the thawra did not cause the economic collapse

The Oct. 17 uprising was a clear result of the political system's inability to carry out reforms that threaten its survival — not the cause of the crisis that followed 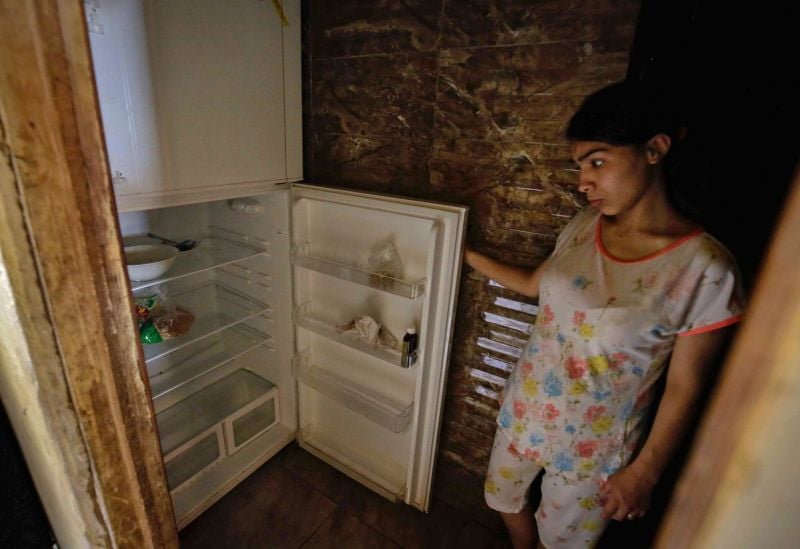 A woman stands next to her empty refrigerator in Tripoli. Poverty has skyrocketed due to Lebanon's financial and economic collapse. (AFP/Ibrahim Chalhoub)

BEIRUT — “The people are hungry,” shouted the demonstrators on the evening of Oct. 17, 2019, calling for the resignation of a government that wanted to impose new taxes on them. A year later, the results are all the more bitter. In 2019, “only” 30 percent of Lebanese lived below the poverty line. Today, 55 percent of them do. At the time, the government was led by Saad Hariri, who was later replaced by Hassan Diab. Ironically, the latter is likely to pass the torch back to Hariri.

So, did the “revolution” only succeed in plunging Lebanon into an unprecedented financial, economic and social crisis? No, the uprising did not create the crisis. It simply expedited the inevitable collapse of a model crippled by the drying up of capital flows, in the shadow of a failing political system.

The crisis was already there well before Oct. 17: negative growth forecasts, a rise in unemployment, the state failing to pay its obligations, a fall in bank deposits. This is not to mention credit crunches, the deficit in the balance of payments, and the halt to loans subsidized by Banque du Liban, Lebanon’s central bank.

All the lights, with no exception, were already flashing red at the start of 2019.

But in a country where numbers are deliberately manipulated, people did not fully grasp the scale of the disaster until Oct. 10, a week before the outbreak of mass protests.

On that day, the dollar was trading, for the first time since 1995, at LL1,600 to the dollar at money exchange offices. This was a clear indication that all attempts by the central bank to attract foreign currency over the past few years, at the cost of a sharp economic contraction, had ended in failure.

The system was seized up, and banks, which had drastically tightened credit conditions, had been applying unofficial exchange controls since July 2019.

While the central bank governor, Riad Salameh, reiterated that there was no “problem with dollar liquidity in the banks,” banks denied transactions in dollars, needed for imports.

This statement had nothing to do with the reality on the ground. Instead, it only served to shake confidence in the financial system, from which capital was already fleeing, all while authorities stood idly by.

No international aid without reforms

The government evoked plots “against the stability of Lebanon,” but was unable to take any action to reassure the country’s owners of capital and Lebanese expatriates, who traditionally inject foreign currency into the country.

It also failed to avoid the impending collapse, which all credit rating agencies and international organizations clearly warned against.

Even the prospect of an $11 billion windfall promised at the CEDRE aid conference, organized by France on the eve of the 2018 legislative elections, failed to break the political deadlock.

But unlike previous international aid conferences, donors this time demanded reforms — something all the sectarian political components that later formed Hariri’s government would essentially agree to.

But the political ruling elites, hostage to their foreign allegiances and guided by political and financial interests, could fulfill neither the economic conditions nor the political requirements necessary to unblock international aid.

The Oct. 17 uprising was nothing but an outcome, and a clear indication of the political regime’s inability to carry out reforms that fundamentally threaten its survival, let alone manage the collapse that followed.

The past year was yet another tragic example of the same. In a single year, Lebanese have lost at least 40 percent of their purchasing power and 80 percent of the value of their savings, and thousands of jobs have been destroyed. All the while, authorities remained idle.

Diab’s government of “technocrats” appointed by sectarian leaders was paralyzed by Parliament even regarding the slightest of attempts at reform — despite both bodies being made up of the same political forces.

Political inertia became the natural approach to crisis management, allowing the regime to preserve its gains without having to bear responsibility for the collapse.

This is especially true since it was no longer just a question of undertaking unpopular reforms to mend public finances, or structural reforms to block clientelism and corruption. It was now also imperative to distribute the losses of the financial system, estimated at nearly $50 billion, i.e. at least double the current GDP of the country.

While the country was in dire need of a stabilization plan and international financial aid, the ruling political elites allowed BDL to play its traditional role: preserving their interests and those of the lobbies supporting them, with total disregard for the impact on the economy and the population.

After having worked on the rescue plan that was announced in April 2020 and never implemented, Alain Bifani could not help but point out the failure of Diab's government when he resigned his post as the top civil servant at the Ministry of Finance.

“The absence of leadership cleared the way for a policy that is completely opposite to the one foreseen in the plan. It was based on a fair distribution of losses, whereby banks and large depositors would bear the bulk of the load and not the general population,” he said.

This policy of lirafication and “socializing” losses is still ongoing today, under a government charged with day-to-day affairs.

Despite the catastrophic situation, compounded by the Aug. 4 explosion at the Beirut port, the health crisis and the “maximum pressure campaign” exerted by French President Emmanuel Macron, the political ruling class has failed, after two months, in forming a “mission government” to deal with the reality on the ground. France has been pushing for this government, whose sole objective would be to stabilize the economy, until the regional situation becomes clearer.

Yet this seems to be already too much to ask of the people’s representatives, with divergent agendas, who clearly are not concerned by the economic meltdown.

“Inertia is a disguised political choice that represents a heavy cost to society that suffers from it,” according to Bifani. This cost far exceeds the de facto haircut the depositors suffer from, with consequences amounting to no less than a social breakdown.

This is particularly true because the central bank papered over the situation with even harsher circulars and measures, resulting in the depletion of the country’s foreign exchange reserves at a rate that now threatens subsidies on basic products. In the event subsidies are lifted on basic items, prices could increase by 50 to 60 percent.

“This would be intolerable in a country where 80 percent of households earn less than LL2 million [per month], while inflation has already halved purchasing power without any social safety net. For a large part of the population, it will simply be the end of the world,” said Kamal Hamdan, an economist and the director of the Consultation and Research Institute, a Beirut-based consultancy.

This is clearly not the end for the regime, which is clinging to power by exploiting the anger in the streets and by designating scapegoats in line with traditional Lebanese fault lines, while being well-aware that it offers no prospects for the Lebanese, who are increasingly packing their bags and leaving the country.

“Migration flows are greater today than during the Civil War,” warned Charbel Nahas, an economist, former minister and the secretary-general of Citizens in a State, a minor political party. Nahas fears some 500,000 permanent departures.

This brutal transformation would radically change the face of Lebanese society, which has become the adaptation variable of the sectarian system. “This is a development that is silently taking place right now before our eyes,” Nahas said.

This potential catastrophe, however, was not what shook the political class, but rather the international and regional interests which seem to favor Hariri’s return.

Hariri intends to capitalize on the French initiative to put the very same political system back on its feet. Should he succeed, international interests would once again join those of sectarian leaders — all at the expense of the Lebanese people. Until the next revolution.

This article was originally published in French in Le Commerce du Levant.

BEIRUT — “The people are hungry,” shouted the demonstrators on the evening of Oct. 17, 2019, calling for the resignation of a government that wanted to impose new taxes on them. A year later, the results are all the more bitter. In 2019, “only” 30 percent of Lebanese lived below the poverty line. Today, 55 percent of them do. At the time, the government was led by Saad Hariri, who was...