From shame to fame … to shame: Saida’s resurrected garbage mountain suffocates the city

Saida has been hampered by the stink and blight of its garbage mountains for decades. The city’s residents, who have been living with the stench, also report fumes and foul smells emanating from the adjoining waste treatment plant. 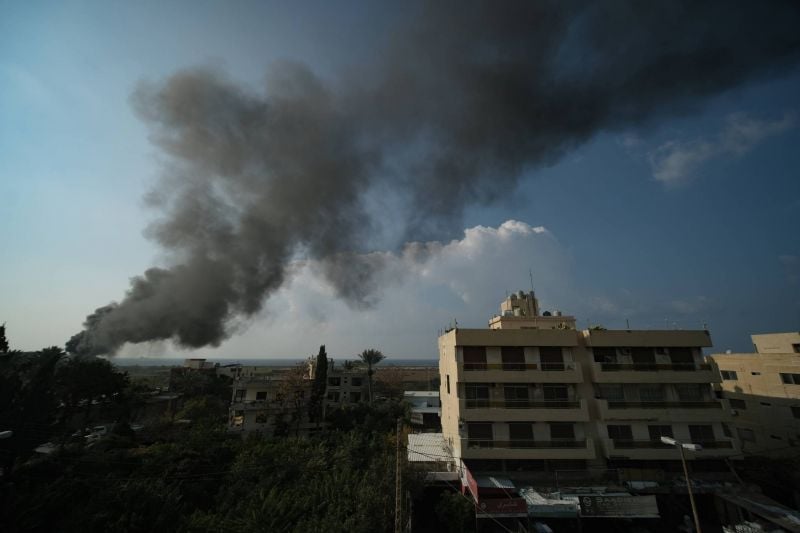 SAIDA, Lebanon — At the landfill site of South Lebanon’s capital, Saida, a once elegant evening gown jostles for space with rotting remains of slaughtered farm animals — bones, horns, skin and hooves — on which swarms of maggots feast.

Waste pickers meanwhile trawl the dumping grounds, foraging for plastic, steel and any material they can find a new purpose for or sell in exchange for money.

This towering mountain of trash lies right next to the sea and in a dense residential area and is situated less than two kilometers from the infamous old one, which metamorphosed into a public park in 2016, in what was initially crowned a success story.

“Nothing was solved,” 36-year-old local resident Zaher Jradeh told L’Orient Today. “They just moved the garbage mountain from one spot to another.”

The private company IBC, Inc., which operates Saida’s waste treatment plant and is in charge of the landfill, designed it to be “zero-waste” and established it in 2008 primarily to put an end to the city’s trash crisis. However, over the years, the plant failed to fulfill its purpose and resolve the problem, ending up with an adjoining landfill that gradually ballooned into a mountain, leaving Saida’s residents struggling to draw clean air. 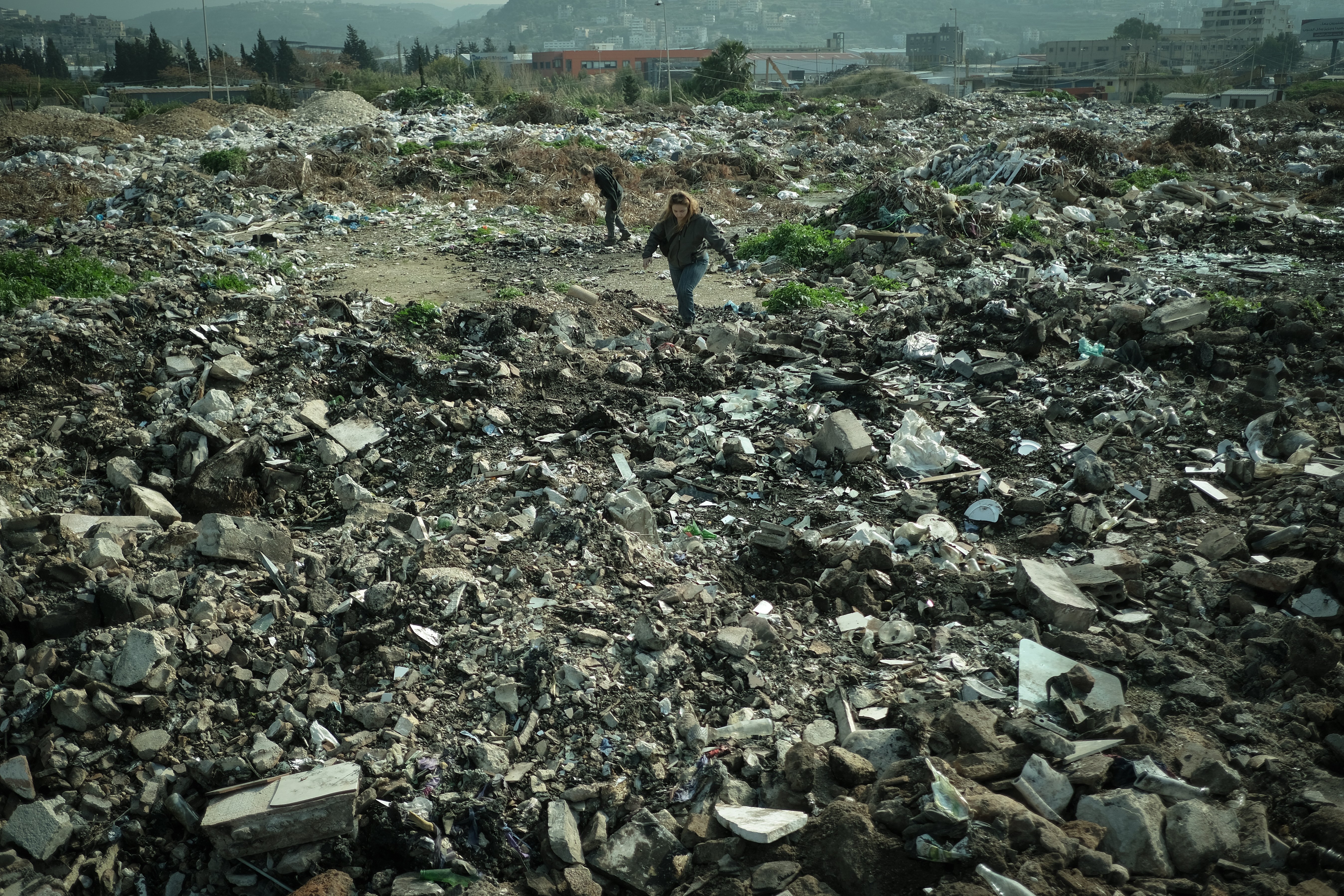 It is the congruity of all the surrounding junkyards with heaps of metal and car parts, against the backdrop of an industrial zone and a trash mountain, that gives Saida’s southernmost point such a post-apocalyptic wasteland atmosphere.

Jradeh, an accountant manager at a manufacturing company, pointed at a hilltop eastward from the window of his office, which lies close to the landfill alongside the waste treatment facility. “This is where I live and the garbage fumes from the facility travel all the way up there,” he said.

“I leave my house in the morning inhaling garbage smell and I arrive at my office to breathe the same toxic fumes, just more intensely.”

Jradeh, who has lived in Saida his entire life, said the stench from the waste facility depends on the wind direction — residents suffer the most when the wind is blowing either south or southeast, toward the most residential areas in the waste plant’s vicinity.

Mohammad, who preferred not to share his full name, lives with six family members, including children, in a house nestled alongside the city’s industrial zone, less than a kilometer away from the waste plant.

The 30-year-old man said that the situation is the worst during summer when his family has to suffer through the blistering heat, as they cannot crack a window lest the smell sneak in and the power supply is too inconsistent to support running the AC unit.

“The smell is the strongest when smoke starts billowing from the facility’s funnel,” Mohammad noted. “We live with the fear that [the children] might develop health and lung issues as they say the fumes are very toxic,” Mohammad said.

However, when contacted by L’Orient Today, the head of Saida’s municipality, Mohammad al-Saudi, denied that the waste facility emits smoke or burns waste.

Testimony after testimony from the area’s residents, however, contradict Saudi’s claim.

Mona Hariri, 61, who has been living in Saida for the past 35 years, said she keeps all her windows and doors shut to keep out the stench traveling from the waste plant facing her house to the west. “We got used to it, and we can’t do anything about it,” she said, seemingly resigned to the smell’s presence.

“We arrived here and built our building before there was any smell or garbage mountain,” Hariri added. “We always think about moving out of this city, but with the situation right now we don’t have many options.”

Lebanon has been mired since 2019 in a financial crisis dubbed by the World Bank as one of the worst in recent history. The country’s currency has plunged by over 95 percent, saddling the majority of the population with severely diminished purchasing power.

Is Saida’s park open to the public?

In 2016, the United Nations Development Program (UNDP), in collaboration with the Ministry of Public Health and the Municipality of Saida, transformed the city’s notorious waste mountain, which lay on the seafront only 200 meters from nearby residences and commercial units, into a public space to offer people an outdoor leisure area for recreation.

Upon a visit to the park two weeks ago, L’Orient Today found its steel gates shut. The guard present said he had received orders to keep the park closed, indefinitely, for reasons that were not clear to him.

Saudi, the head of Saida’s municipality, however denied the park is closed, saying it opens its gates to visitors on the weekends only — Friday through Sunday. 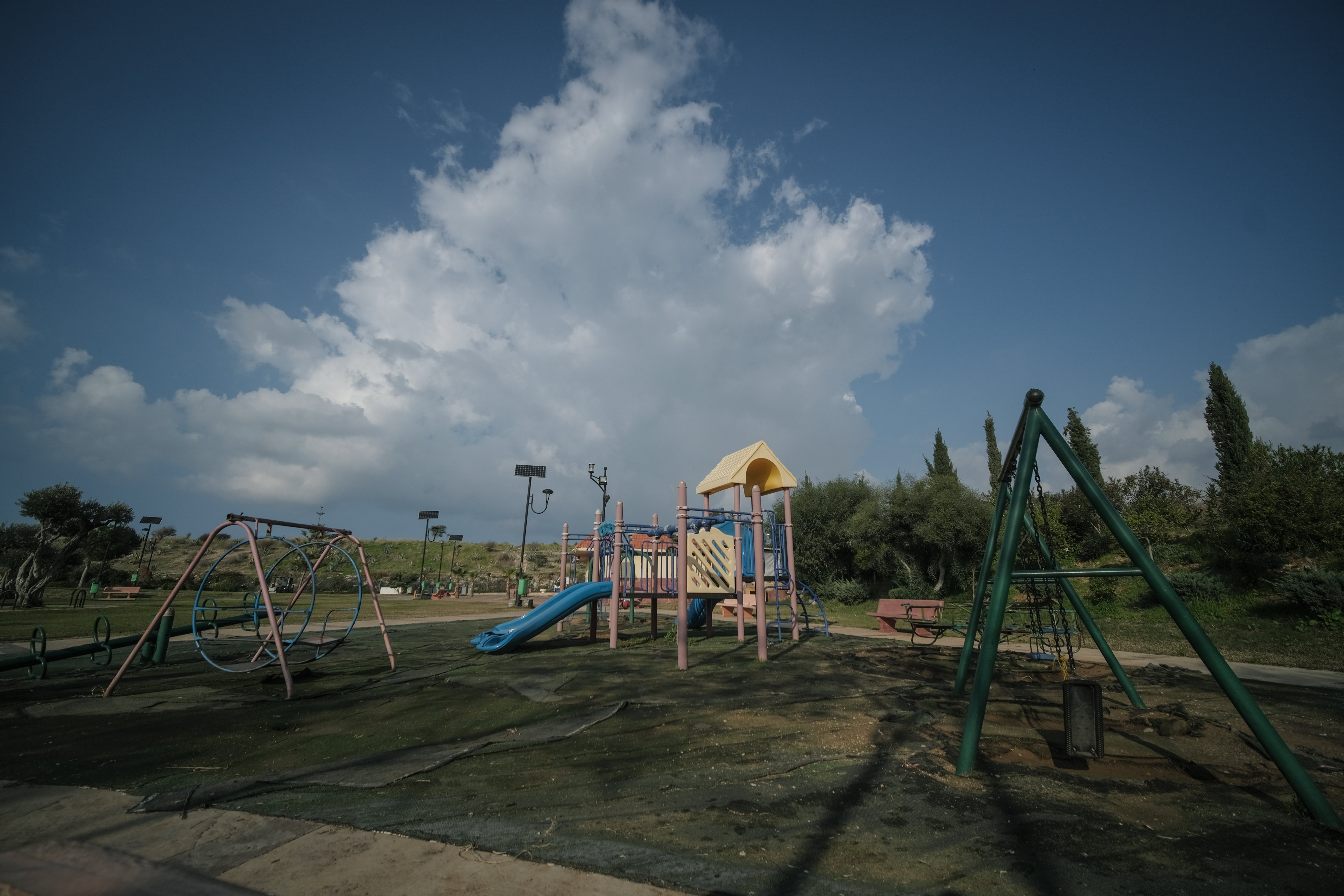 A deserted and worn out playground in Saida’s park, which supposedly opens only on weekends. Jan 9, 2023 (Credit: João Sousa/L'Orient Today)

Mohammad said he has no interest in visiting the park that replaced the old garbage mountain, even though he has heard it is “beautiful.”

“Why would I want to go to a park that used to be a landfill when they built a new trash mountain next to it,” Mohammad said, criticizing Saida’s municipality head for not putting “more effort” into fixing the issue from its roots.

“Why not build [the waste facility] a little bit further, in a non-residential area,” Mohammad asked.

Jradeh, for his part, admired the park, which he knows many residents visit. “It’s really beautiful and [the municipality] takes care of it, but they built another garbage mountain a bit further from it and now one will go to the park and the stench of trash from the new trash mountain will smack one in the face.”

When asked if he ever contemplates moving out of the city, Jradeh said, “From the country entirely — I’m striving to get out of this country, not only the city.”

SAIDA, Lebanon — At the landfill site of South Lebanon’s capital, Saida, a once elegant evening gown jostles for space with rotting remains of slaughtered farm animals — bones, horns, skin and hooves — on which swarms of maggots feast.Waste pickers meanwhile trawl the dumping grounds, foraging for plastic, steel and any material they can find a new purpose for or sell in exchange for...