Happy Holidays: Covid-19 down, cholera under control, flu numbers up

Professionals say that, though COVID-19 seems to be less virulent, seasonal flu has reappeared in the country, so masks and vaccination are still required. 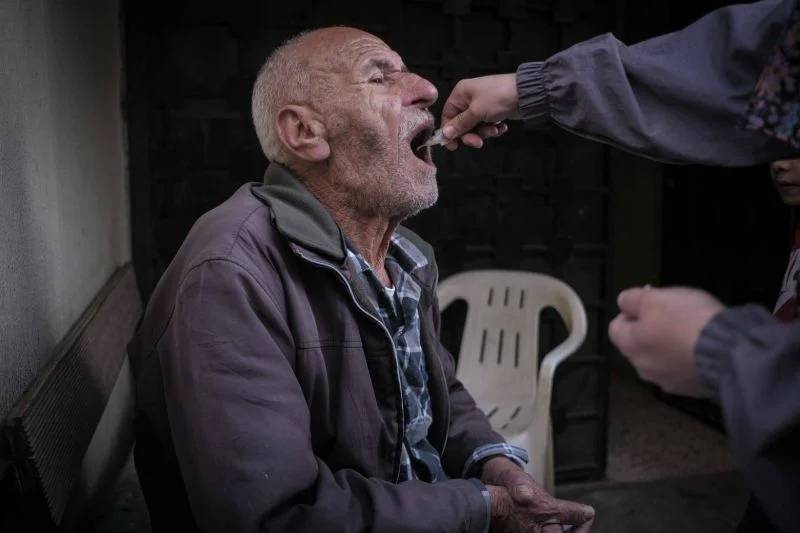 A dose of cholera vaccine is administered during the Health Ministry campaign in Akkar. (Photo: João Sousa)

Since the COVID-19 outbreak in 2020, the year-end holidays have become synonymous with a surge in Coronavirus infections and increased hospitalizations.

This year, however, the virus seems to be less virulent, and while the country has been facing a cholera outbreak since October, it seems to be under control. With the onset of winter, though, seasonal flu has made a reappearance.

In order to protect oneself against infections during the holidays, health officials still recommend masks and vaccinations.

“If we can get through the holiday season without a spike in COVID-19 infections, we can say that the worst is behind us and that it is now a virus similar to other respiratory viruses,” said MP Abdel Rahman Bizri, a specialist in infectious diseases and clinical microbiology who heads the national committee on COVID-19.

With Coronavirus now “technically under control,” Bizri is worried about seasonal flu.

“It’s been two years since the flu almost disappeared in favor of the coronavirus,” Bizri explained to L’Orient-Le Jour. “It’s making a comeback this year because we let our guard down. In some cases, the flu is more severe than usual because we have lost our immunity somewhat. Nearly 80 percent of infections are due to H3N2, 15 percent to H1N1 and five to six percent to the B virus.”

Bizri called on the elderly and those with chronic illnesses to get flu shots and COVID-19 jabs to avoid infection at holiday gatherings. “You should continue to wear a surgical mask in crowded places,” he said. It should be noted that experts say it is best to wait a week between one vaccine and another, or to consult one’s doctor.

Caretaker Health Minister Firass Abiad also believes that seasonal flu is likely to spread at family gatherings this year. “I advise the elderly or those with chronic diseases to get vaccinated before the holidays. If any of the guests have a cold, they should avoid attending parties and gatherings,” Abiad told L’Orient-Le Jour.

“The flu is a little more severe this year and some patients have had to be hospitalized,” the minister said. “The elderly and those with chronic diseases should take precautions.”

Abiad called on Lebanon’s residents to continue the fight against COVID-19 with a booster shot. “We will soon receive a bivalent vaccine, which protects against both old and new COVID strains,” he said. “I advise people over the age of 65 and those in poor health conditions to get vaccinated as soon as possible.”

In addition to the spread of respiratory viruses this winter, Lebanon must also deal with the reemergence of cholera, a first since 1993, since the country has failed to address the safe treatment of wastewater.

In response, the Health Ministry launched a vaccination campaign in the Bekaa Valley and Akkar that has protected 500,000 people since Nov. 12, according to Abiad’s statement on Wednesday.

“Cholera is under control,” the health minister told L’Orient-Le Jour. “We will start the second phase of vaccination, this time in Tripoli and Baalbeck.”

Cholera is usually caused by ingestion of food or water contaminated with vibrio cholerae, often found in feces. For those who will be hosting family dinners during the holidays, Bizri advised “to check the source of food items, keep it refrigerated until consumed, and wash fruit and vegetables thoroughly” to avoid cholera contamination.

“The situation is under control because we quickly launched a vaccination campaign,” he said. “Infections decreased since the authorities started to provide wastewater treatment plants with more electricity.”

Fuel shortages due to the crisis have slowed the operation of the sewage-treatment plants, most of which are inoperative. So, masks and protective measures should not be abandoned this holiday season, until pandemic and epidemic become a distant memory.

Abiad will launch the second national cholera vaccination campaign Friday. The details of this new phase will be sketched during a press conference at the ministry.

There the minister will take stock of the first phase of vaccination, which followed the reappearance of the disease in Lebanon in October. Other partners will also be present, such as the International Amel Association, international NGO Medair, Doctors Without Borders and the Lebanese Red Cross. All these organizations participated in the first vaccination campaign, which seems to have helped to contain this disease.

So far, 5,186 suspected cases of cholera have been reported in Lebanon, of which 660 have been confirmed (including two cases confirmed in the Ministry’s latest report), as well as 23 cholera-related deaths. The regions most affected are Akkar and some parts in the Bekaa Valley.

This story was originally published in French in L’Orient-Le Jour. Translation by Joelle Khoury.

Since the COVID-19 outbreak in 2020, the year-end holidays have become synonymous with a surge in Coronavirus infections and increased hospitalizations.This year, however, the virus seems to be less virulent, and while the country has been facing a cholera outbreak since October, it seems to be under control. With the onset of winter, though, seasonal flu has made a reappearance.In order to...