The 31-year-old Iranian refugee, who this week ended a hunger strike he began on Oct. 31, is desperately trying to join his wife in Norway. 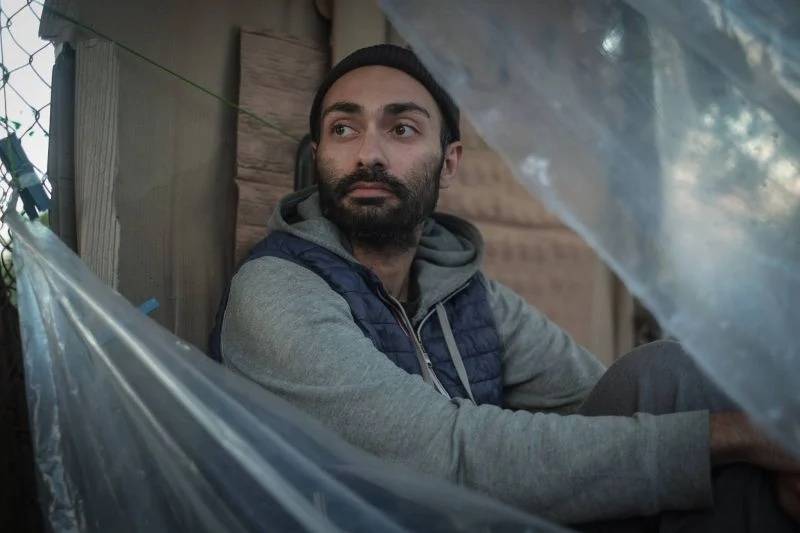 Peyman Karimi in his tent where he is camping in front of the UNHCR. (Credit: João Sousa/L'Orient Today)

Nothing prepared Peyman Karimi for what he was going to face when he came to Lebanon in 2019, where, two years later, he became a refugee.

Living under cardboard boxes used to construct a makeshift tent covered by a plastic tarp, the young Iranian man this month undertook a hunger strike and camped for 22 days outside the concrete walls of the United Nations High Commissioner for Refugees (UNHCR) in Jnah, a suburb of Beirut, in a bid to urge the UN organization to relocate him so that he can be reunited with his Norwegian spouse living in Oslo.

During his protest, Karimi, 31, passed his time texting his wife.

“I am stuck here because no country wants me,” Karimi told L’Orient-Le Jour during his hunger strike. His voice weak and his face pale and drawn.

“What happened to me shows the influence of the Iranian regime in Lebanon,” he added.

Karimi told L’Orient-Le Jour the story of his misadventure and the events that caused him to wind up in Lebanon.

After converting to Christianity at the age of 17, Karimi was threatened by his brother, a member of the Basij — a volunteer militia serving Iran’s Islamic Revolutionary Guard Corps.

Between the years 2014 and 2017, the young man tried to make it in Canada but ended up in Nicaragua for nearly a year before deciding to leave that country as it was swept by a wave of protests.

“Lebanon was not my first choice because of its proximity to Iran through Hezbollah,” Karimi said with a hushed voice.

In Lebanon, he met Marianne, who was an exchange student in Beirut. The two got married on Sept. 27, 2021. Karimi at the time was illegally staying on Lebanese soil, having overstayed the visa he was granted on arrival in 2019.

‘You don’t have the right to insult our religious leader’

Lebanon had been swept up in the Oct. 17 protest movement. In the meantime, Iran was also witnessing turmoil, as Iranians took to the streets to protest against the regime — protests that left 1,500 dead, according to Reuters.

“I wanted to show my support for the Iranian demonstrators,” Karimi said.

On Nov. 19 of the same year, he marched to Beirut Martyrs’ Square brandishing a banner, bearing the face of Khamenei, Iran’s supreme leader, with a “Stop” sign and the Lebanese “revolution’s” flagship slogan Killun yaani killun (All means all) painted over it.

On his way back, two men smiled at him and asked him to take a picture. He acquiesced.

A few seconds later, one of them snatched the sign by the string and shouted at him, “You have no right to insult our religious leader,” he yelled, accusing Karimi of being an agent in the pay of the United States.

This was the first time he saw the dark side of Beirut.

The next day, one of the two men who harassed him, circled his building on a scooter and took pictures of it.

On July 24, 2020, officers equipped with shields and assault rifles burst into his home.

They turned his apartment upside down and confiscated all his electronics. Under his girlfriend, Marianne’s frightened gaze, they handcuffed him, put a bag on his head, and took him away.

“It was later that I understood that it was the General Security,” Karimi recounted. “I still haven’t seen my arrest warrant.”

For seven days, he was questioned about his past, and his political positions against the Iranian regime.

“They showed me the photo of Khamenei’s banner [the one I made] and asked me who had sent me to do this, and if I had any acquaintances in the American and British embassies,” Karimi said.

In the meantime, his then girlfriend, and now wife, was looking for him in Lebanon’s prisons. She was also questioned.

“They wanted to know if he had ever disappeared all of a sudden,” Marianne told L’Orient-Le Jour over the phone.

Karimi spent 18 days in detention, until his lawyer, Diala Chehade, was able to get him out. The General Security Directorate gave him back his phone and computer, but not his passport.

The next day, he went to UNHCR to request refugee status, which he obtained on Sept. 24, 2021.

Contacted for commentary, the General Security Directorate told L’Orient-Le Jour to refer to its press release issued following an article by Al-Arabiya titled “An Iranian man trapped in Lebanon for criticizing Khamenei.”

The directorate claimed that Karimi was arrested “because his residence permit had expired and for no other reason,” according to the statement.

Indeed, Karimi was illegally working in a hotel in Beirut. According to him, he was waiting on his employer to do the necessary procedures for him to obtain his work permit.

Contacted by L’Orient-Le Jour, the hotel manager said that Karimi, who worked in this establishment for a little over a year, allegedly claimed to be Canadian-Iranian and was not clear about the duration of his stay in Lebanon.

“He was initially arrested for his political stances, but he remained in detention because he did not have papers,” his lawyer, Chehade, explained.

“Over the past three years, it is rare to see people without papers being arrested. The police no longer have the capacity to do so. They usually use this approach with people with certain political views in order to intimidate them,” she added.

After being released, the General Security Directorate gave Karimi “a deadline to regularize his status in order to obtain a work and residence permit,” according to a statement from the directorate.

He, however, has yet to initiate the procedure.

“He was afraid of being detained again. In order for him to finish his papers, he needed his passport, which was still confiscated by General Security,” Chehade explained.

His file has been transferred to the intelligence service of the Internal Security Forces (ISF), which complicates access to information, according to the lawyer.

But since then, Karimi’s Iranian passport expired. His only option now would be to renew it at the Iranian Embassy.

“I don’t want any contact with them,” Karimi said. Contacted by L’Orient-Le Jour, the Iranian Embassy did not respond to requests for comment.

At the moment, Karimi and his wife are doing everything to be reunited in Norway. “The Norwegian Embassy and the government are of no help,” Marianne said.

Her lawyer Joe Karam has tried to reach the Norwegian ambassador several times. “So far, we have not had any positive response from them,” Karam said.

Contacted by L’Orient-Le Jour, the Norwegian Embassy refrained from commenting citing “confidentiality” over a “personal matter.”

On Wednesday, Karimi told L'Orient-Le Jour that he had ended his hunger strike.

"After the unprofessional treatment I received from the UNHCR officers on Monday morning and the fact that the UNHCR had not contacted me even once with in these 22 days either regarding my file or to even ask about the state of my health, I was convinced that the UNHCR is not concerned the slightest about my health. And I'm afraid I have to end the strike," he said, adding, "As far as the strike goes, under these conditions, I believe I achieved as much as I could."

Contacted by L’Orient-Le Jour ahead of Karimi ending his strike, the UNHCR said that it “cannot comment publicly on individual cases for reasons of confidentiality and personal protection of refugees.”

However, Karimi believes his efforts have not been entirely futile.  "I achieved a few things I hoped to achieve with the strike. I wanted to get my voice heard, and I wanted the UNHCR to remember their responsibility toward my safety, and with the help of the media I believe I achieved those," he said.

"I'm hoping to take advantage of all the support and coverage that we received within these 22 [days] to attract even more support and to mobilize forces that will help us put more pressure on Norwegian politicians and the government and also encourage other countries to welcome us," he added.

Nothing prepared Peyman Karimi for what he was going to face when he came to Lebanon in 2019, where, two years later, he became a refugee.Living under cardboard boxes used to construct a makeshift tent covered by a plastic tarp, the young Iranian man this month undertook a hunger strike and camped for 22 days outside the concrete walls of the United Nations High Commissioner for Refugees (UNHCR)...