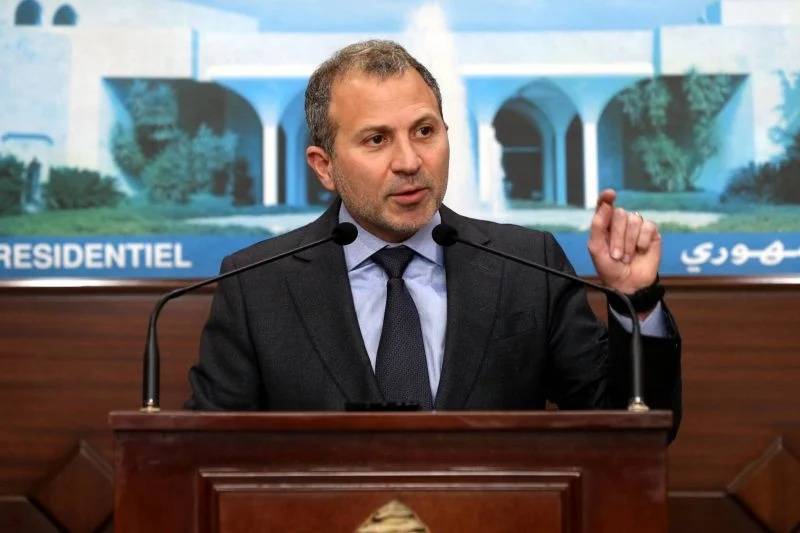 The leader of the Free Patriotic Movement Gebran Bassil in Baabda, January 12, 2022. (Credit: Dalati and nohra)

BEIRUT —The leader of the Free Patriotic Movement (FPM), Gebran Bassil, said Wednesday that his parliamentary group will vote blank in Thursday's parliamentary session to elect a successor to President Michel Aoun, whose term expires on Oct. 31.

"We will participate in the parliamentary session tomorrow to elect a president and will vote blank," Bassil said, according to comments reported by the al-Jazeera channel.

Last Thursday, the FPM boycotted Parliament's second presidential electoral session, citing the date's conflict with a highly symbolic anniversary for the party. On Oct.13, 1990, then-Prime Minister Michel Aoun — who founded the FPM — was driven out of the Baabda Palace by Syrian troops.

Bassil said his party refuses to allow the "constitution to be amended to elect the commander-in-chief of the army, Joseph Aoun," — who is seen as a possible consensus candidate — because a first-category civil servant cannot run for president until two years after leaving office (Article 49). This condition has been skillfully overcome several times, most recently in 2008 when Michel Sleiman took power.

Bassil called for the formation of a new government, while the caretaker government of Najib Mikati has been managing current affairs since May 22. "If a new government is not formed we will be heading towards more than constitutional and social chaos," he warned.

As part of a dialogue initiative to identify several presidential candidates, launched last week by Bassil, an FPM delegation met Wednesday with Kataeb leader Samy Gemayel at the party's headquarters in Saifi.

"We agreed to continue the dialogue because the exceptional situation that the country is going through requires us to discuss all together, even if there are differences in views," said FPM MP Assad Dargham after the meeting.

"The current situation in the country and the presidential vacancy that we could reach forced us to have this meeting and these negotiations," he added. Dargham offered assurances that the FPM will continue to hold such meetings in order to "reach common points with the other parties and all Lebanese".

Last week, Bassil showed his willingness to meet with all political parties in Parliament. He visited President Aoun and the headquarters of the Patriarchate in Bkerke to update them on his progress in identifying possible candidates. But some political parties, such as the Lebanese Forces of Samir Geagea — rival of the FPM — refused to participate in this dialogue.

On Monday, a delegation from the FPM, led by Bassil, met with the Speaker of Parliament and head of the Amal movement, Nabih Berri. Bassil said that "consensus is a must" for the Lebanese presidential election.