According to the Red Cross, 17 people are still missing though the number of passengers on the boat has not been confirmed by its owner. 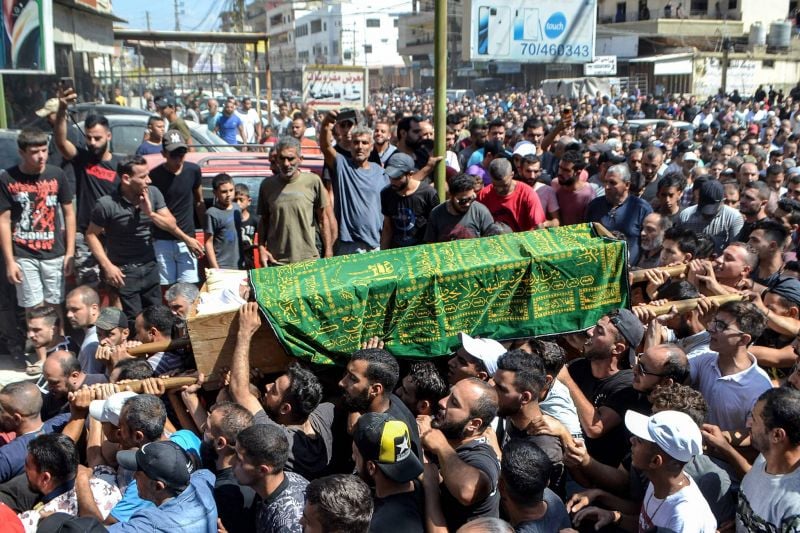 Mourners march with the body of one of the victims who drowned in the shipwreck of a migrant boat that sank off the Syrian coast, during his funeral after the return of his body in Lebanon's northern port city of Tripoli on September 24, 2022 (Credit: Fathi AL-MASRI / AFP)

BEIRUT — The total death toll in the shipwreck of a migrant boat that left Lebanon and sank off Syria on Thursday has risen to over 100, according to a statement made Sunday afternoon by the director of Banias port Nawfaq Ibrahim.

This new toll was announced after the recovery of six more bodies, all transferred to Al-Basel Hospital in Tartus, according to L'Orient Today's correspondent in North Lebanon.

According to Red Cross sources, 17 people who were aboard the boat remain missing. However, the secretary-general of the Lebanese Higher Relief Committee, Mohammed Khair, said that the owner of the boat does not know the number of people who boarded the vessel, making it very difficult to estimate the number of missing persons.

In this difficult situation, Khair hailed the efforts of the Syrian rescue teams who "have to do this very difficult and continuous task" of recovering bodies.

Some estimates place the number of people were on board the boat that sank off Tartus, some 50 kilometers (30 miles) north of Tripoli in Lebanon, from where the migrants set sail, at 150.

The rising death toll makes the shipwreck one of the eastern Mediterranean's deadliest such episodes.

Who are the Lebanese people risking death to flee their country?

At least 14 survivors are recovering in hospitals in Syria, while six others were discharged. Two remain in intensive care in Al-Basel Hospital, Syria's official SANA news agency reported Sunday.

Those on board were mostly Lebanese, Syrians and Palestinians, and included both children and elderly people, the UN said.

The bodies of some of the victims originating from Lebanon are being transferred to the country.

The Lebanese Red Cross said Saturday evening that it had received at the Arida crossing on the Lebanon-Syria border three more bodies that had been recovered by the Syrian Red Crescent, L'Orient Today's correspondent in North Lebanon reported, while three more bodies arrived Sunday after being identified by their relatives, according to Khair.

In Tripoli, anger mixed with grief as relatives received news of the deaths of their loved ones.

Hundreds of people attended the funerals of the victims, in Nahr al-Bared Palestinian refugee camp, in Tripoli and in Akkar.

In Qarqaf, in Akkar, the funeral of a Lebanese woman was held Saturday evening. She was the mother of four children, three of whom also died in the shipwreck. The fourth has not yet been found. The woman's husband survived the tragedy.

On Saturday, the Lebanese Army said that it had arrested a Lebanese national who "admitted to organizing the recent [people] smuggling operation from Lebanon to Italy by sea."

Lebanon, a country which hosts more than a million refugees from Syria's civil war, has been mired in a financial crisis branded by the World Bank as one of the worst in modern times.

Nearly three years of economic collapse have turned the country into a launchpad for migrants, with its own citizens joining Syrian and Palestinian refugees clamoring to leave by dangerous sea routes.

On Saturday evening, MP Ibrahim Mneimneh (Forces of Change/Beirut II) said on his Twitter account that he visited relatives of victims in Tripoli, Akkar and Nahr al-Bared camp to offer his condolences. According to our correspondent, he was accompanied by his colleague MP Halimé Kaakour.

"We discussed the circumstances of this case with their relatives, to be able to follow up on this case at the parliamentary and legislative level, in all its aspects," said Mneimneh, denouncing at the same time "the absence of the most basic rights in these marginalized regions."

For its part, Hezbollah expressed on Saturday "its deep sorrow and grief at this tragedy," the state-run National News Agency reported.

In a statement, Hezbollah expressed its condolences to the families of the victims, before praising "the immediate initiative and the remarkable efforts made by the Syrian authorities" in their rescue operations.

The party "also thanks the Lebanese health and security parties for their prompt action in the rescue operations and humanitarian and medical aid," the statement continued.

"The Lebanese state must fulfill its duty towards the citizens who suffered this immense tragedy and accompany their families in the difficult circumstances our country is going through," Hezbollah also said, calling on officials to track down the smugglers and punish them severely, as well as to "take all measures to put an end to the dangerous crossing operations."

Since 2020, Lebanon has seen a spike in the number of migrants using its shores to attempt the perilous crossing in jam-packed boats to reach Europe.

Reacting to the shipwreck, the United Nations High Commissioner for Refugees, Filippo Grandi, described it as a "heart-wrenching tragedy."

The UN children's agency, UNICEF, said on its hand that 10 children appeared to be "among those who lost their lives" in Thursday's sinking.

"Years of political instability and economic crisis in Lebanon have pushed many children and families into poverty, affecting their health, welfare and education," UNICEF added.

Philippe Lazzarini, head of the UN agency for Palestinian refugees said: "No one gets on these death boats lightly. People are taking these perilous decisions, risking their lives in search of dignity."

Lazzarini said more must be done "to offer a better future and address a sense of hopelessness in Lebanon and across the region, including among Palestine refugees."

Antonio Vitorino, head of the International Organization for Migration, said: "People looking for safety should not be compelled to take such perilous and often deadly migration journeys."

Most of the boats setting off from Lebanon head for European Union member Cyprus, an island about 175 kilometers (110 miles) to the west.

BEIRUT — The total death toll in the shipwreck of a migrant boat that left Lebanon and sank off Syria on Thursday has risen to over 100, according to a statement made Sunday afternoon by the director of Banias port Nawfaq Ibrahim. This new toll was announced after the recovery of six more bodies, all transferred to Al-Basel Hospital in Tartus, according to L'Orient Today's correspondent in...