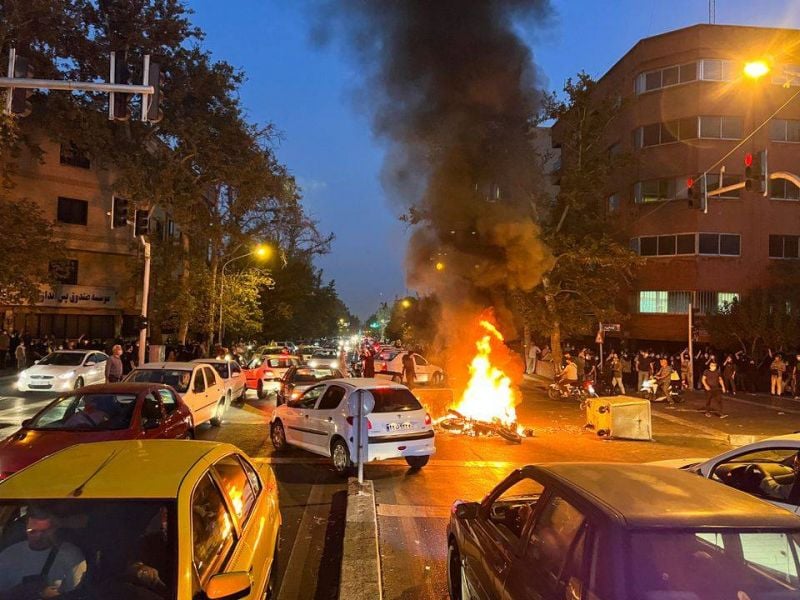 A police motorcycle burns during a protest over the death of Mahsa Amini, a woman who died after being arrested by the Islamic republic's "morality police", in Tehran, Iran September 19, 2022. (Credit: WANA (West Asia News Agency) via REUTERS/File Photo)

Public anger flared in Iran after authorities announced Friday the death of 22-year-old Mahsa Amini, who was arrested for allegedly wearing a hijab headscarf in an "improper" way.

Activists said Amini suffered a fatal blow to the head while she was in custody, a claim denied by officials who have announced an investigation. To protest her death, some women have defiantly taken off their hijabs and burned them in bonfires, or symbolically cut their hair before cheering crowds, according to video footage that went viral on social media.

"No to the headscarf, no to the turban, yes to freedom and equality!" protesters were heard chanting in a Tehran rally— chats that have been echoed in solidarity protests abroad, including in New York and Istanbul. Iranian state media reported Wednesday that, in a fifth night of street rallies that spread to 15 cities throughout the country, police used tear gas and made arrests to disperse crowds of up to 1,000 people.

Women: The first victims of the ayatollahs

London-based rights group Article 19 said it was "deeply concerned by reports of the unlawful use of force by Iranian police and security forces," including the use of live ammunition. Demonstrators hurled stones at security forces, set fire to police vehicles and garbage bins and chanted anti-government slogans, the official IRNA news agency said.

"Death to the dictator" and "Woman, life, freedom," were slogans protesters could be heard shouting in video footage that spread beyond Iran, despite online restrictions reported by internet access monitor, Netblocks.

Iran's supreme leader Ayatollah Ali Khamenei spoke publicly Wednesday but did not mention the unrest, before ultra-conservative President Ebrahim Raisi addressed the UN General Assembly in New York. Also at the UN, British Foreign Secretary James Cleverly told AFP that "the Iranian leadership should notice that the people are unhappy with the direction that they have taken. There is another path that they could take."

The wave of protests over Amini's death "is a very significant shock, it is a societal crisis," said Iran expert David Rigoulet-Roze, of the French Institute for International and Strategic Affairs. "It is difficult to know the outcome but there is a disconnect between the authorities with their DNA of the Islamic revolution of 1979 and an increasingly secularized society."

"It is a whole social project that is being called into question. There is a hesitation among the authorities on the way forward with regard to this movement," Rigoulet-Roze continued.

Protests first erupted Friday in Amini's home province of Kurdistan, where governor Ismail Zarei Koosha said Tuesday that three people were killed in "a plot by the enemy." Kurdistan police commander Ali Azadi announced the death of another person Wednesday, according to Tasnim news agency.

Two more protesters "were killed during the riots" on Wednesday in Kermanshah province, the region's prosecutor Shahram Karami told Fars news agency, blaming "counter-revolutionary agents." Norway-based Kurdish rights group Hengaw said two protesters, aged 16 and 23, were killed overnight in West Azerbaijan province. An additional 450 people were wounded and 500 were arrested, the group said— figures that could not be independently verified.

Video spread online showing security forces opening fire on protesters in the southern city of Shiraz, where protests continued into the early hours of Wednesday morning. Amini's death and Iran's response to the protests have sparked condemnation from the United Nations, United States, France and other countries.

The protests are among the most serious in Iran since November 2019 when unrest broke out over fuel price rises. On Tuesday, foreign ministry spokesman Nasser Kanani condemned what he called "foreign interventionist positions."

"It is regrettable that some countries try to take advantage of an incident under investigation as an opportunity to pursue their political goals and desires against the government and people of Iran," he said.

Iran's Telecommunications Minister Issa Zarepour warned of internet restrictions on Wednesday, citing the "security issues of these days," ISNA news agency said. Article 19 said it was "alarmed by the local internet shutdowns," recalling that in 2019 authorities "used the darkness of a shutdown to kill, maim and arrest protesters and bystanders with impunity."

Public anger flared in Iran after authorities announced Friday the death of 22-year-old Mahsa Amini, who was arrested for allegedly wearing a hijab headscarf in an "improper" way.Activists said Amini suffered a fatal blow to the head while she was in custody, a claim denied by officials who have announced an investigation. To protest her death, some women have defiantly taken off their hijabs...

Queen Elizabeth dies at 96, ending an era for Britain