The exhibitions of the young Lebanese photographers whose photos illustrate the weariness of Lebanon, and the Lebanese crushed under a dreadful series of crises and tragedies, were among the displays that most captured hearts at the 34th edition of the international photojournalism festival of Perpignan. 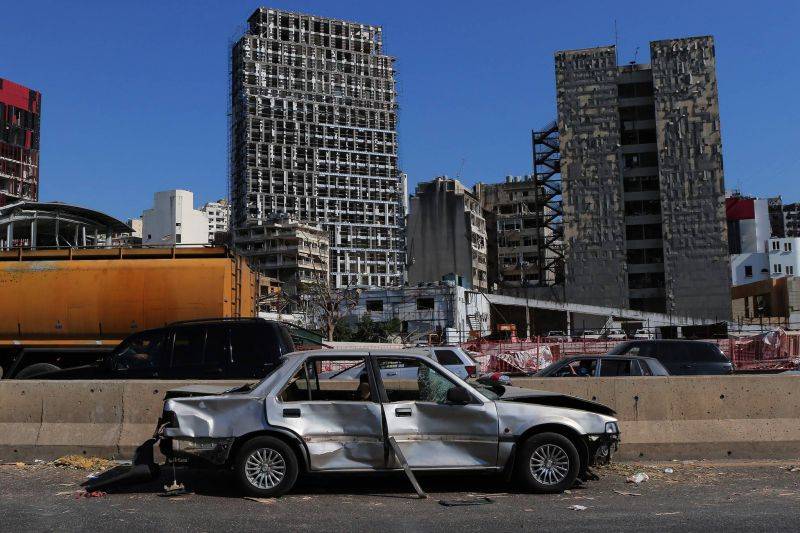 A striking photo of an urban landscape that has become a carcass. (Credit: Tamara Saade)

Since its creation in 1989, the international festival of photojournalism, “Visa pour l'image,” which takes place every end of summer in Perpignan, selects the best stories and photos from around the world.

In its 34th edition, the event, which “aims to show the world’s news in its different facets,” according to the festival director Jean-Francois Leroy, was certainly awash with photos depicting the war in the Ukraine and climate change crisis.

The country of the cedars, however, is also present in the festival through the snaps of Tamara Saade, a 25-year-old Lebanese journalist and photographer whose work is among the “the favorites picks” of the organizers.

Saade’s “Tiers of Trauma” exhibition comprises about 30 photographs taken in the street of Beirut, “testifying to the dramatic situation in which Lebanon has sunk in recent years,” according to the Lebanese photographer.

Exhibited from Aug. 27 to Sept. 11 on the walls of the Convent of the Minimes in Perpignan, Saade’s snapshots illustrate with sensitivity and realism shrouded in certain poetry, “the exhaustion of a country and a population at the end of their tether.”

“The country as well as its inhabitants are undermined by the succession of traumas they have undergone and continue to undergo without respite, crossing each time a new level in suffering and disarray,” Saade said.

Her exhibition at the “Visa pour l'image” festival covers both the demonstrations organized across the country in 2019 and the aftermath of the Aug. 4, 2020, Beirut port explosion.

Between these moments of revolt carried by hope (young people brandishing the national flag above the statue of the martyrs) and the dark days, weeks and months that followed the terrible Beirut blast, the striking photos of Saade (depicting a forsaken urban landscape with a shattered population) unfold the story of a painful descent into hell — that of an entire country. 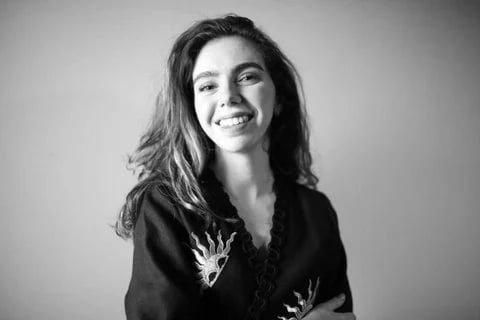 “No soul in Lebanon has been spared by the events of the last two years. Financially, those who had savings have lost them. Physically, the explosion has left more than 300 people disabled, the population lives in daily stress, the COVID-19 pandemic is still with us, and many can no longer cope. There are more and more children on the street, old people in need. Morale has also been hit hard. The country seems to be in a state of depression, in a state of permanent anxiety, of schizophrenia with people trying to lead a normal life in such an absurd context,” the photographer points out in the note of intent that accompanies the photos presented in Perpignan.

These photos are the “proof of the injustice that reigns in the country,” she said with the ardor of a 25-year-old.

“And now seeing them exhibited at this festival bringing together the great names of photojournalism … I still find it hard to believe,” she added, in a voice suddenly veiled, one that gives away shyness and extreme sensitivity that turns into adrenaline on the pitch.

An extension of her hand

As far back as she can remember, Saade has “always felt more comfortable behind the viewfinder.” Her passion for photography prompted her friends to offer her a semi-professional camera for her 16th birthday.

“Since then, I haven’t gone out a single day without my camera. It has almost become an extension of my hand,” she said with a smile on her face. She also admitted to a passion for the camera itself.

“I now have a small collection of about 15 cameras, between film and digital. I use each one depending on the project, if it is a job that needs to be done quickly or not. Personally, I like the grain that analog photography gives and how long it needs to process,” she said.

“More than photojournalism, I like to be surprised by what the environment can offer me as a subject. Taking a camera, walking around, and capturing street scenes is almost a therapy for my anxiety,” the young artist said.

“It has the same effect on me as music,” Saade added. She made her first steps as a professional photographer during her friends’ alternative music concerts, and under the sponsorship of her great friend and “inspirer” Myriam Boulos.

It was after a summer internship at L’Orient-Le Jour, the photography enthusiast who happens to also love words, decided to go into journalism.

She received her first degree in media and communication from the American University of Beirut in 2017 at AUB. After landing a few freelance collaborations in magazines and news websites in Lebanon and abroad, she flew to New York to complete her master’s degree in journalism at Columbia University.

The multidisciplinary journalist — who often mixes writing, photography and video — spent two years in the Big Apple, where she worked in video editing at the United Nations. 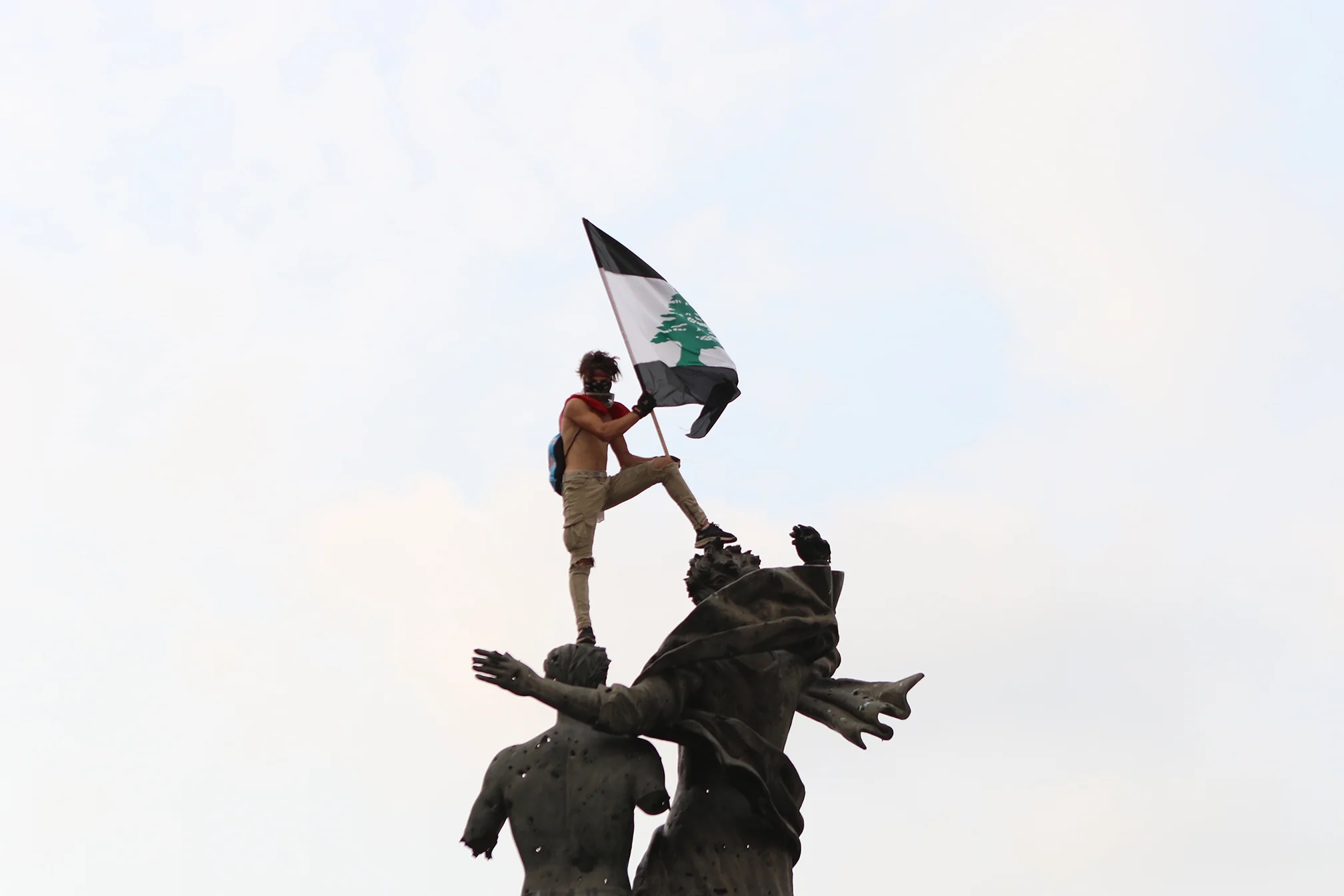 The next day, the day after and the days after …

“Aug. 4, 2020, is a date engraved in my memory as well as in the memory of all Lebanese who experienced this trauma. I was at home, and except for broken windows, I was lucky to have escaped unscathed with my family,” Saade recounted.

“As soon as I made sure that my family and friends were unharmed, I got on my bike and rode through the city, driven by the need to see, to understand, to testify … I will always remember the sounds of my tires on the broken glass, the haggard faces of the survivors I met along the way, the blood and destruction. After a while, I continued on foot. I don’t know how I had the strength to do it,” she said.

She continued with a broken voice, “But I was determined to go to the place of the tragedy. The next day, the day after and all the days that followed, I made the same journey again …”

Saade deeply hopes that she will be able to approach Lebanon in her future projects under another angle than that of misery, suffering and tears — a plan on which she has already started to work.

In her written and photographic reports, Saade is keen on highlighting the beautiful stories and socio-cultural initiatives that are unfolding in the country, despite everything.

Since its creation in 1989, the international festival of photojournalism, “Visa pour l'image,” which takes place every end of summer in Perpignan, selects the best stories and photos from around the world.In its 34th edition, the event, which “aims to show the world’s news in its different facets,” according to the festival director Jean-Francois Leroy, was certainly awash with photos...