Here’s what happened yesterday and what to expect today, Friday, Aug. 26, and over the weekend: 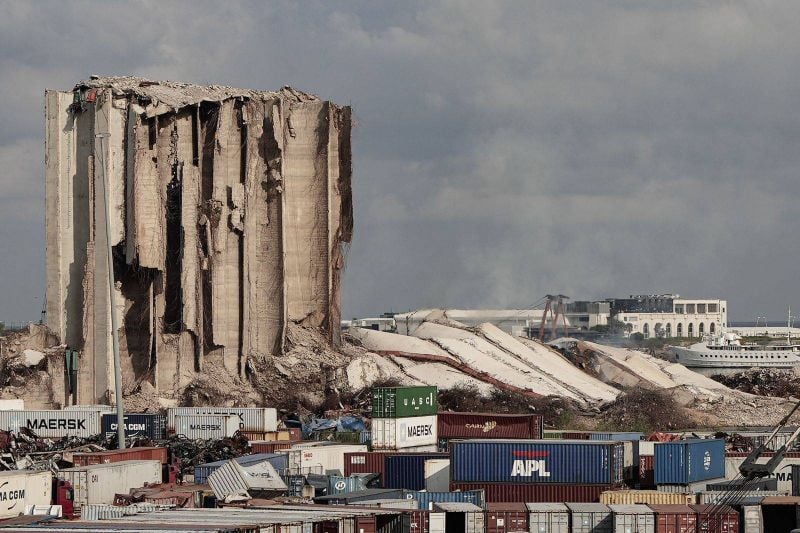 The Beirut port silos on Tuesday morning after the remainder of the crumbling northern block collapsed. (L'Orient Today/Mohammed Yassin)

Firefighters coordinated with port authorities yesterday to begin cooling the leftover silo grains, which are dangerously hot amid a fire that has raged for over a month at the northern block of the Beirut port silos, the last portion of which collapsed on Tuesday. The silos were damaged in the Aug. 4 Beirut port explosion, which authorities claimed led the fermented grain in the compromised structure to ignite in the summer heat in early July. Four silos fell on July 31, four more on the second anniversary of the explosion and eight on Tuesday. Earlier in the day on Thursday, port blast victims’ families held a sit-in at the Beirut port to peacefully protest the authorities’ inaction on the silos fire. Shortly afterward, authorities began the process to cool the overheated grain in the silos. The Environment Ministry still needs to quantify the amount of grain remaining in the silos to assess the full scope of the removal process, Mohamad Abiad, senior advisor to caretaker Environment Minister Nasser Yassin, told L’Orient Today. Abiad noted that the entire process would take weeks to complete. A letter signed by caretaker Prime Minister Najib Mikati and sent to caretaker Public Works Minister Ali Hamieh on Tuesday proposed the preservation of the stable southern block of the silos as a national monument, revoking an earlier, controversial government decision to demolish the structure.

The Finance and Budget Parliamentary Committee passed and sent the 2022 budget to the Parliament general assembly, despite not agreeing on all points, committee chair MP Ibrahim Kanaan said. “We’re between a rock and a hard place,” Kanaan wrote in a tweet, as the budget could either be passed in its current form by the legislature or abandoned. The committee had received the budget after Cabinet approved it in February, with discussions recently culminating after fiscal income and expense disclosure deadlines were issued to the Finance Ministry and committee members expressed disagreement over certain items. The budget is among the reforms mandated by the International Monetary Fund in an April staff-level agreement with Lebanon to unlock an aid package that could be crucial to the country’s recovery from a devastating economic crisis.

Electricity outages and a strike, respectively, halted work at civil administration offices in Akkar and mobile telecommunications providers Alfa and Touch. The telecom providers’ headquarters and sales points were announced closed by the striking employees, who were responding to failed negotiations with their administrators over being granted better salaries amid Lebanon’s deepening economic crisis. The strike also led to the suspension of customer services, maintenance work on stations and mobile phone lines and recharge card sales. Similarly, Lebanon’s judges are in their second week of a strike to protest their working conditions, decrying dilapidated courthouses, some of which reportedly lack running water. Meanwhile, the Akkar civil status registry office’s closure — caused by power cuts over unpaid private generator bills — prevented residents of more than 50 towns in the surrounding area from finalizing their administrative procedures. Outstanding payments owed by the state also jeopardized food security in the Roumieh, Zahle and Tripoli prisons and the Baabda women's prison as their caterers warned they would “no longer continue their deliveries.” The different issues are affecting state institutions amid years of economic crisis marked by steep currency devaluation. The plummeting Lebanese lira has driven fuel prices up, especially after the removal of central bank subsidies, exacerbating Lebanon’s electricity crisis. Yesterday, Electricité du Liban announced that its last power plant in Zahrani, South Lebanon, has run out of fuel oil and will go out of service by Friday afternoon.

The submarine search operation attempting to recover the bodies of people who sank aboard a migrant boat in April has located the wrecked vessel, the Lebanese Army reported. The submarine crew reportedly found the boat off the coast of Tripoli at a depth of 459 meters and a distance of 130 meters from the shipwreck site. It was unclear at the time of reporting whether any of the 30 people still missing had been found. Earlier yesterday, Col. Fadi Abou Eid of the Lebanese Army told L’Orient Today that only pieces of clothing had so far been found at the site of the sinking. Abou Eid had estimated that the search, which began two days later than intended due to turbulent waters, would take “several days.” Nearly 85 passengers boarded the smuggler boat that sank in April. The passengers were reportedly heading for Europe in an effort to escape the economic crisis in Lebanon. Some 40 people aboard the migrant vessel are believed to have died, though the majority of them have not yet been recovered.

People driving cars, trucks and tractors flocked to the scene of a fire that had raged Thursday morning in the northern Lebanon town of Qobayat, in order to collect the burnt wood, the head of the Environment Council in Qobayat Antoine Daher said in a statement. A fire erupted in an oak forest Thursday morning near Qobayat in Akkar, a region that has been heavily affected by forest fires in recent weeks. Civil Defense firefighters and members from Darb Akkar association, an NGO specializing in wildfires and which has a mountain rescue team, deployed to the uneven mountain terrain. Caretaker Environment Minister Nasser Yassin said on Thursday he was “monitoring the situation” and had also contacted the Army to deploy a helicopter to help extinguish the fire.

In case you missed it, here’s our must-read story from yesterday: “Children in Lebanon are deprived of the basics, robbed of their dreams, losing trust in their parents: UNICEF report”

Want to get the Morning Brief by email? Click here to sign up.Firefighters coordinated with port authorities yesterday to begin cooling the leftover silo grains, which are dangerously hot amid a fire that has raged for over a month at the northern block of the Beirut port silos, the last portion of which collapsed on Tuesday. The silos were damaged in the Aug. 4 Beirut port explosion, which...