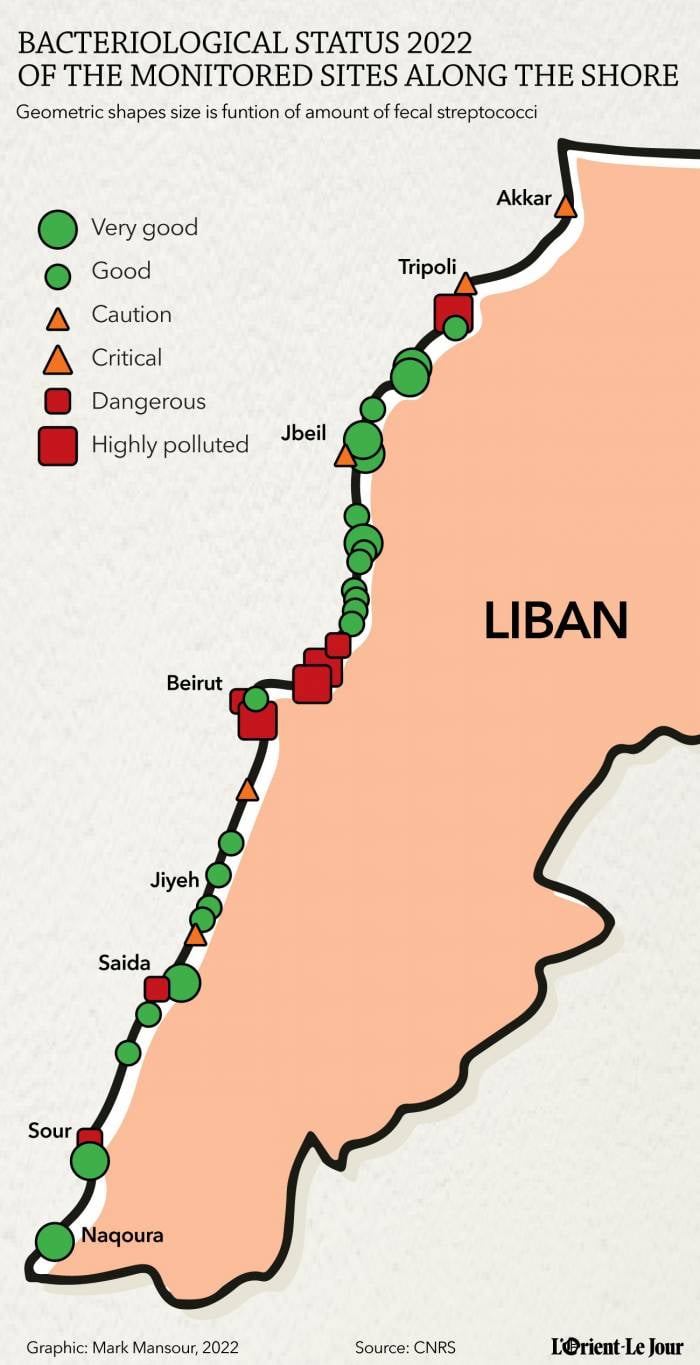 It's a long-awaited document every year: despite the crisis that has hit scientific research — like other sectors — hard, the water quality index of beaches in Lebanon was released on Thursday at the National Council for Scientific Research (CNRS-L).

Prepared by the council’s Center for Marine Studies, the report covered the main public beaches of the country, comprising a total of 37 points from north to south (compared to 36 last year). The results remain quite similar to previous reports: 24 of the sites monitored have water quality ranging from “good” to “very good” (the same number as last year), six average – marked as “caution” or “critical” — and seven “dangerous” or “highly polluted” (the majority of which are between Beirut and Dbayeh).

Focusing mainly on bacteriological pollution from untreated sewage (streptococci and fecal coliforms), as the means to measure any chemical pollution are not currently available, the document is based on monthly samples throughout the year in the various sites included in the study.

In detail, the most polluted beaches are on the Beirut-Dbayeh section of the coast, with the worst distinction going to Antelias beach, which is absolutely unfit for bathing, followed by Ramlet al-Baida in Beirut, as well as Manara (only Ain al-Mreisseh is an exception in the capital) One of the public beaches in Jounieh is also among the sites to be avoided, while Maameltein beach in the same region has quite acceptable water quality (but it is closed to the public). Other polluted beaches include "the beach of restaurants" in Sour (not to be confused with the famous nature reserve, whose water quality is very good). The last beach in this unenviable category is the main public beach in Tripoli (another, near the municipal stadium, is clean, however).

Basically, the beaches in the north, from Akkar to Tripoli via Minyeh, are mostly of average or poor quality. The water quality improves significantly and becomes good to very good in Anfeh, Chekka (the beaches of Heri, which do not have a problem with bacteriological pollution but are close to cement factories – potential chemical contamination has not been explored in this study), Batroun (except for the beach of Bahsa with average water quality), Amchit, Jbeil, Fidar, Bouar, Oqaibeh, Safra.

In the south of Beirut, swimming in the beaches of Khaldeh and Saida should be approached with caution. Over the years, the beach in Saida has seen improvements and setbacks, but the municipality is trying to combat the remaining sources of pollution, according to the CNRS. The coastline from Damour to Naqoura, through Jiyyeh, Awali, Ghaziyeh, Sarafand, Adloun and Sour (in addition to a single beach mentioned above) is of good to very good quality.

Microplastics: twice as many as industrialized countries

The launch of the report on Thursday took place at the headquarters of the CNRS in the presence of Minister of Environment Nasser Yassin; Minister of Agriculture Abbas Hajj Hassan; the new secretary general of the CNRS, Tamara el-Zein; and the director of the Center for Marine Studies, Milad Fakhry. Zein lamented that private beaches (or those with a private investment right, to be more accurate) are not required by law to conduct tests and display the results for the safety of their customers. The CNRS report, for the 38th consecutive year, focuses primarily on public beaches, with few exceptions.

The new secretary general also focused on the scientific methodology behind this annual study, introducing a new feature this year, the study of microplastics in water. Microplastics are the microscopic fragments that result from the breaking up of plastic waste in water, which are particularly harmful because they are ingested by fish and thus re-enter the food chain. They also carry other pollutants.

The figures put forward by Fakhry are far from reassuring: a study conducted in the sites of Ramlet al-Baida and Sour (reserve) — one site very polluted bacteriologically and the other not — shows a significant concentration of microplastics, about 24 per cubic meter of water in Sour, and about 40 in Beirut. The expert noted that this is more than double what has been found in much more industrialized countries, especially in Europe. Zein reminds us that the sources of this pollution, whether governmental sites such as large landfills or individual negligence of bathers, are land-based and must be addressed through action that involves everyone.

Finally, as in previous years, Fakhry was reassuring about the fish in Lebanese waters which, according to him, do not have abnormal concentrations of heavy metals and can be eaten without fear. As for some invasive species such as the puffer fish, for example, he recommended avoiding them, as they are toxic regardless of their size.

It's a long-awaited document every year: despite the crisis that has hit scientific research — like other sectors — hard, the water quality index of beaches in Lebanon was released on Thursday at the National Council for Scientific Research (CNRS-L).Prepared by the council’s Center for Marine Studies, the report covered the main public beaches of the country, comprising a total of 37...

Burned alive, allegedly by her husband, Hanaa Khaled succumbed to her injuries