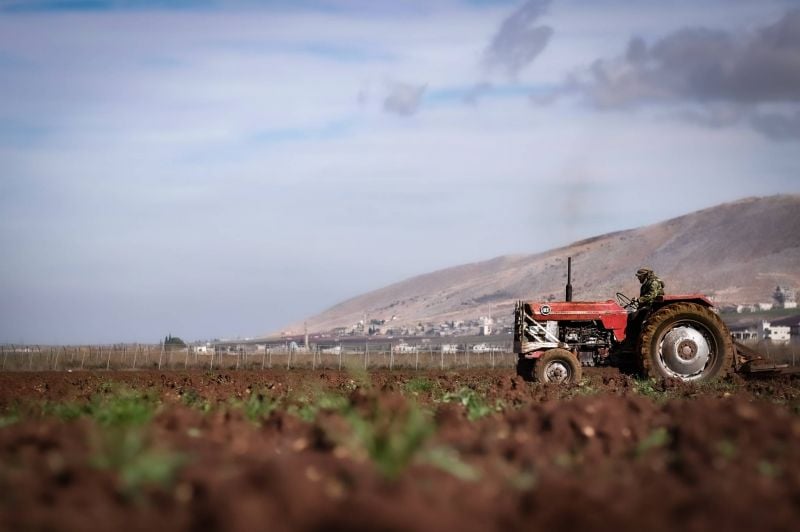 BEIRUT — Lebanon’s agriculture sector continued its decline in 2021, albeit at a slower pace than the year before, according to data gathered by the Lebanese Center for Research and Agricultural Studies (CREAL).

The total value of Lebanon’s agricultural production in 2021 — meaning the amount that farmers earned from selling their produce — stood at about $1.3 billion, compared to $1.4 billion the year before, and down from more than $1.9 billion in 2018 and 2019, according to the center’s annual report on the state of the agriculture sector. (CREAL calculates the dollar value using quarterly averages for the parallel market dollar to lira exchange rate).

The value of plant crops — including fruit, vegetables and cereals — saw a slight rebound in the 2021 season compared to 2020, according to the report, but remained below pre-crisis levels, while the value of animal husbandry production continued to fall.

Farmers have been struggling amid Lebanon’s financial crisis, due in large part to the rising cost of fuel and the expense of imported inputs such as seeds and fertilizer. Last year also saw another blow to the sector with the Saudi ban on Lebanese produce put in place in April 2021. While the effects of the embargo were largely mitigated by increased exports to other countries, particularly Egypt, the CREAL report noted that the situation for farmers remains precarious.

“Favorable climatic conditions have generally resulted in good harvests, with irrigation at a still affordable cost,” the report noted. “… Although the purchasing power of the Lebanese was very affected in 2021, the demand for food products was sustained. Syria, which normally floods Lebanese markets with its vegetables and some of its fruits, was itself suffering in 2021 a crisis of agricultural production. This reduced the negative impact on farm prices to the benefit of the Lebanese producer.”

Field crops saw the strongest recovery, largely driven by potatoes, with the value of potato production increasing from about $55 million in 2020 to $159 million in 2021, surpassing the pre-crisis rate at least as far back as 2016. This was despite the fact that the area of land planted with potatoes actually decreased from 11,395 hectares in 2020 to 9,150 hectares last year. The increase in value was largely due to high export prices, the report noted. 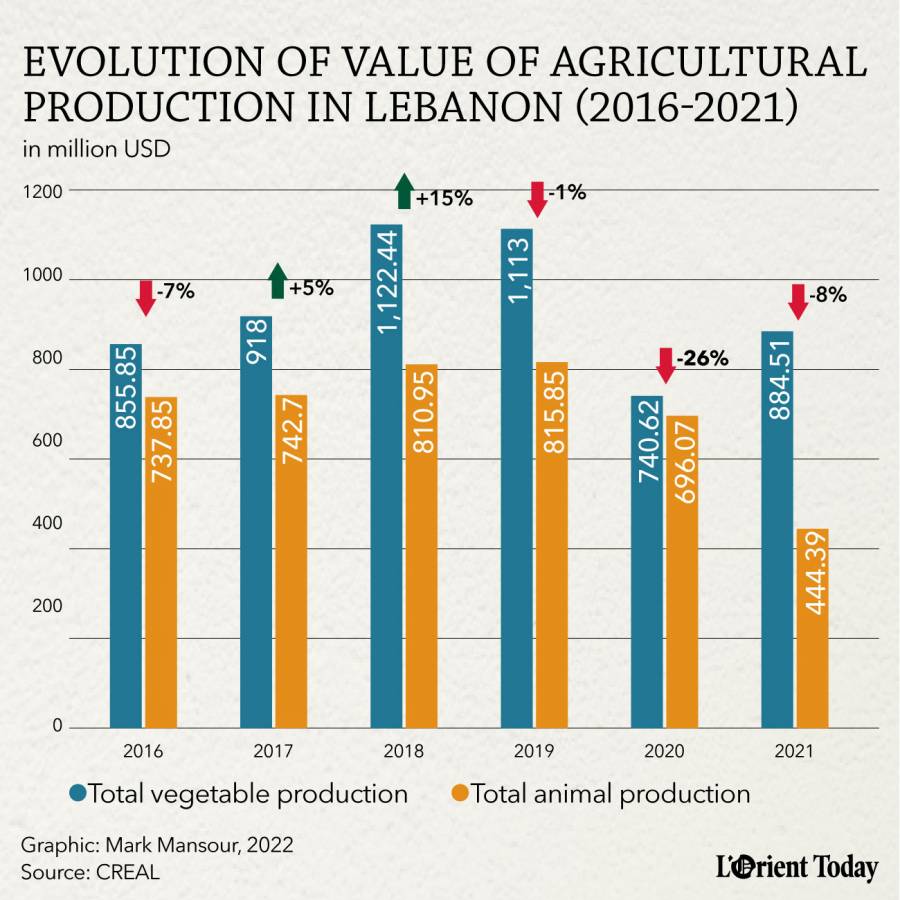 CREAL director Riad Fouad Saade told L’Orient Today that in addition to favorable export prices and climate conditions last year, some farmers had been able to take advantage of a government subsidy program providing dollars for imported agricultural inputs such as fertilizer, pesticides and seeds at a rate of LL3,900.

Although he criticized the subsidy as largely inaccessible to farmers without political connections and said that importers had taken advantage of it by hiking up their prices while some subsidized products were smuggled to Syria, Saade acknowledged that some farmers had benefited from it.

“The price is important, but the cost of production is also important, because the benefit of the farmer is the difference between the price and the cost,” he said. “In that year, the cost of production was still low, because [farmers] had taken advantage of the subsidies of the state, which was a horrific, bad plan, but several farmers could take advantage of it, mainly the large farmers.”

However, that subsidy has ended, and the price and climate conditions in 2021 were “exceptional,” he said. “So, we cannot be optimistic in such a fluctuating situation.”

Ibrahim Tarshishi, head of Bekaa Farmers Association, told L'Orient Today that from his point of view, the subsidy had done more harm than good.

“The subsidy that was on the agricultural inputs, we consider that it was very chaotic,” he said. “There were things happening in a way that wasn’t correct. The absence of a subsidy is actually much better than when it was in place, because it was being exploited, it was going to certain people, it was being dispersed in an unjust way. There are people who were taking a lot of benefit from it and people who were getting nothing.”

Reached by telephone, Agriculture Minister Abbas Hajj Hassan said he had not yet read the report. He could not subsequently be reached for comment.

Apart from the state subsidy, the Food and Agriculture Organization of the United Nations launched a voucher program in 2020 to provide farmers with funds to buy agricultural inputs. The program began as a $200,000 pilot program distributing vouchers of $200 to 1,000 farmers in Akkar and Baalbeck-Hermel in 2020 to pay for fertilizer, seeds and equipment. The program expanded in the following year, with FAO, in collaboration with the Ministry of Agriculture and the World Food Programme, distributing $300 vouchers to more than 32,000 beneficiaries in 2021 and 2022, with which the farmers could buy seeds, fertilizers, animal feed, fish feed and varroa mite treatment for honeybees.

A spokesperson for the FAO said in a statement that follow-up monitoring of the project found that “farmers had a high level of satisfaction and asked for additional similar support.”

However, the CREAL report also criticized the implementation of the FAO program, saying that people who were not eligible had received vouchers in some cases, while some voucher recipients had sold them at reduced prices amounting to 50 or 60 percent of their value.

The FAO spokesperson said the agency had put “an effective complaints and feedback mechanism in place [for the program] and did, through a third party monitoring agent, a post distribution monitoring of the voucher scheme.”

The impacts of last year’s Saudi ban on Lebanese produce were largely offset by an increase in exports to Egypt as well as more fruit exports to Europe, Saade said. Experts had projected that fruit crops such as apples and grapes would be impacted by the ban. For apples, indeed, the value of production decreased from $77.3 million in 2020 to $68.1 million in 2021, despite exports to Egypt having compensated for much of the lost Saudi market, but for grapes, it increased from $35.8 million to $63.5 million, largely due to increases in exports to Europe, Saade said.

Meanwhile, the report noted, the ability of Lebanese banana farmers to sell their product was affected by the severe recession in neighboring Syria, which is typically the main importer of Lebanese bananas. The value of banana production decreased from $93 million in 2020 to $50.1 million last year.

On the animal husbandry side, the value of poultry production decreased sharply, from $446.5 to $190.2 million. The report noted that while the state had previously fixed the per-kilogram price of chicken, it did not do so in 2021.

Despite a recovery in some parts of the agriculture sector, the report said, “In the absence of effective intervention by the public authorities and without being able to benefit from international aid, the execution of which remains sterile or even negative, the Lebanese farmer is left to himself. … He remains the weakest link of the food value chain.”

BEIRUT — Lebanon’s agriculture sector continued its decline in 2021, albeit at a slower pace than the year before, according to data gathered by the Lebanese Center for Research and Agricultural Studies (CREAL).The total value of Lebanon’s agricultural production in 2021 — meaning the amount that farmers earned from selling their produce — stood at about $1.3 billion, compared to $1.4...