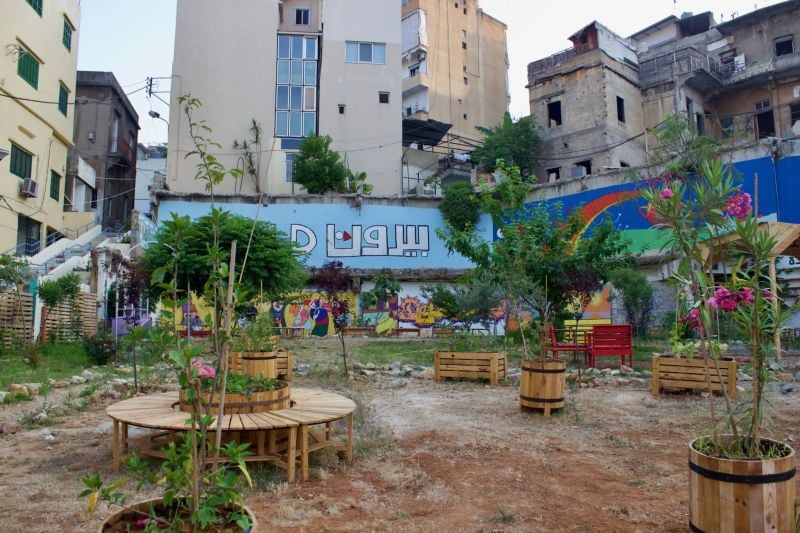 BEIRUT — In early 2017, in the face of widespread opposition, a 1930s-era factory that was reportedly the oldest brewery in the Middle East was destroyed to clear the way for another of modern Beirut’s signature luxury apartment towers.

Many Beirutis mourned the demolition of the historic Grande Brasserie du Levant, also known as the Laziza Brewery. An open letter penned by architects and heritage activists and published in L’Orient-Le Jour months before the demolition began had called it a “crime.” The demolition, which reached regional and international media, was widely viewed as symbolic of a post-war tendency to disregard the existing urban fabric in favor of new, lucrative real estate projects.

Five years later, the largest part of the former brewery’s footprint is a massive hole in the earth, walled off by the real estate developers. But, across the street, on a lot that was also originally part of the brewery, locals have found something new to cherish — an unofficial park. 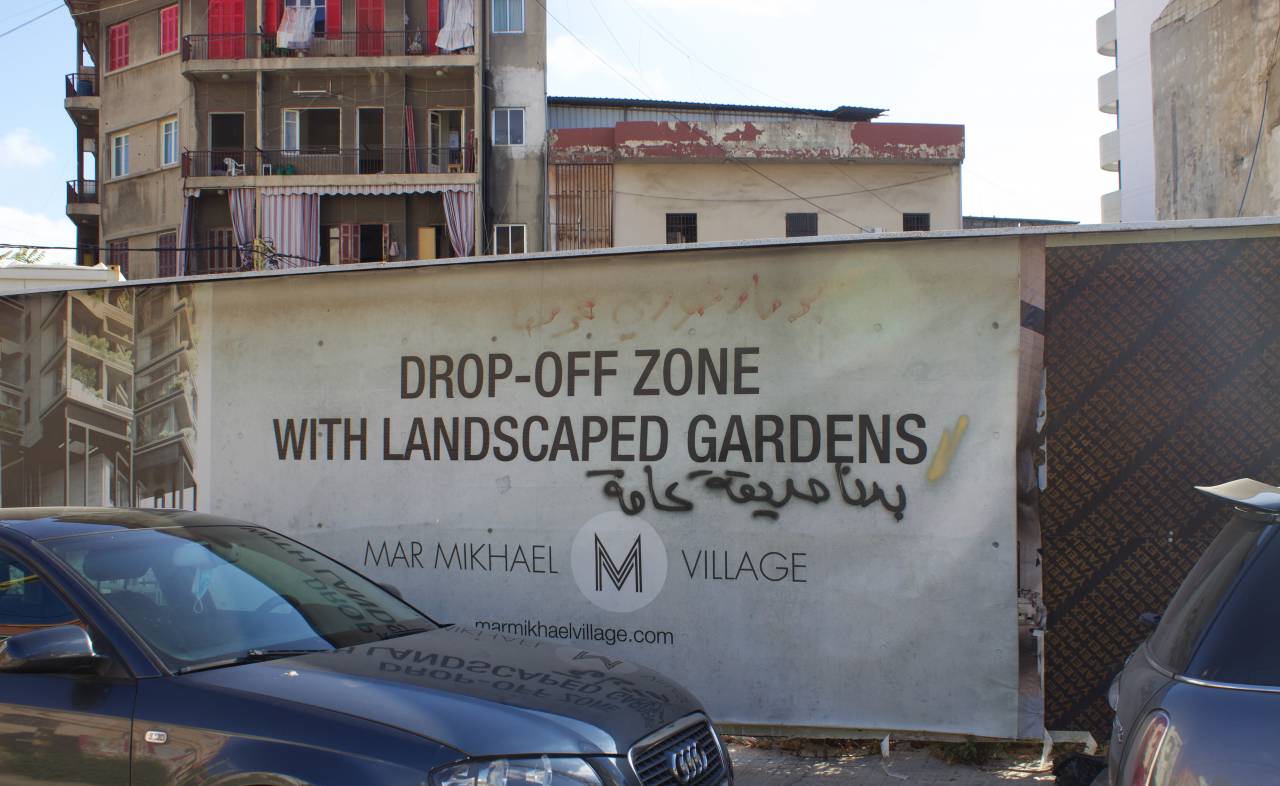 A fence advertising the site’s future real estate development surrounds the pit where the main part of the Laziza brewery once stood. Someone has tagged it, writing “We want a public park.” (Credit: Richard Salame/L'Orient Today)

Lebanon’s first brewery, Laziza, was founded in 1931 by Georges Gellad and quickly found success. In the decades before the civil war, Laziza was among the most popular beers in the country and the factory was a neighborhood institution. Apple sellers rented refrigeration space there, and the brewery ran a side business producing gas for fire extinguishers. During the civil war the brewery distributed water to the neighborhood and was an occasional shelter for scores of people.

The brewery survived most of the civil war unscathed, at least physically, but was forced to close after being hit with stray shells in 1990. In 1999 Gellad’s grandson relaunched the Laziza business, this time as the non-alcoholic beverage sold today, and in 2003 Laziza was acquired by Brasserie Almaza, the makers of Almaza and Rex beers, but the original brewery facility fell into disuse, becoming instead a landmark destination for graffiti artists.

“This space specifically means a lot to me because during the time it was still a beer factory, as graffiti artists, we used to break in and paint on it,” said a local street artist who goes by the name Spaz.

Indeed, the space was legendary for street art, said another artist who goes by Exist.

“Everyone had work in the factory ... It was a place where we would get graffiti artists from abroad to come paint. There were a bunch of international artists with work in the beer factory.”

Today, on a typical day at Laziza Park, people loiter about, talking on their cell phones. A young man takes a nap on a bench. A woman waits for a meeting she has to attend later in the neighborhood. A man who lives nearby waters the plants. In the evening, a group of people gathers to smoke arguileh, drink coffee and talk.

At two years old, Laziza Park is one of the few parks to open in Beirut in recent years. It began in March 2020 when a group of volunteers under the name groBeirut came together to clean what had become a vacant lot full of weeds and garbage and plant trees in it. To give the trees a better chance at survival, they brought in more fertile topsoil, Samer Al Hag Ali of groBeirut recalls.

“Part of our work was literally replacing the ground. We brought soil for agriculture so the trees and plants could grow up. These trees are the largest ones in Laziza today,” said Hag Ali.

In August of that year, the Beirut port explosion took more than 200 lives and left many more wounded, disabled, and traumatized. But it also brought a new swell of volunteer energy to the area, including to the new park.

The park quickly found an audience in a city starved for green space. People from the neighborhood began to come to drink coffee and smoke argileh, kids played in the grass. Local NGO Rashet Kheir also joined in last summer, hosting free activities and events in the space, often in coordination with groBeirut.

In 2021 UN Habitat put out a call for partners to rehabilitate and reactivate the Rmeil area’s two parks — the official municipal William Hawi Garden and the new Laziza Park — and the narrow alleyways connecting them, with funding to the tune of $90,000. Funds for the project were donated by the Japanese government.

Rashet Kheir was selected as an implementing partner in January and over the next five months upgraded Laziza Park with new benches, planter boxes, new mural paintings, and solar-powered lighting. They also worked with the Beirut municipality to fix the sewage connections next to the park, which were causing an unpleasant smell. But they were careful not to make permanent modifications to the plot of land, Ilda Nahas, founder and president, explains. This is because Laziza is not a typical park. 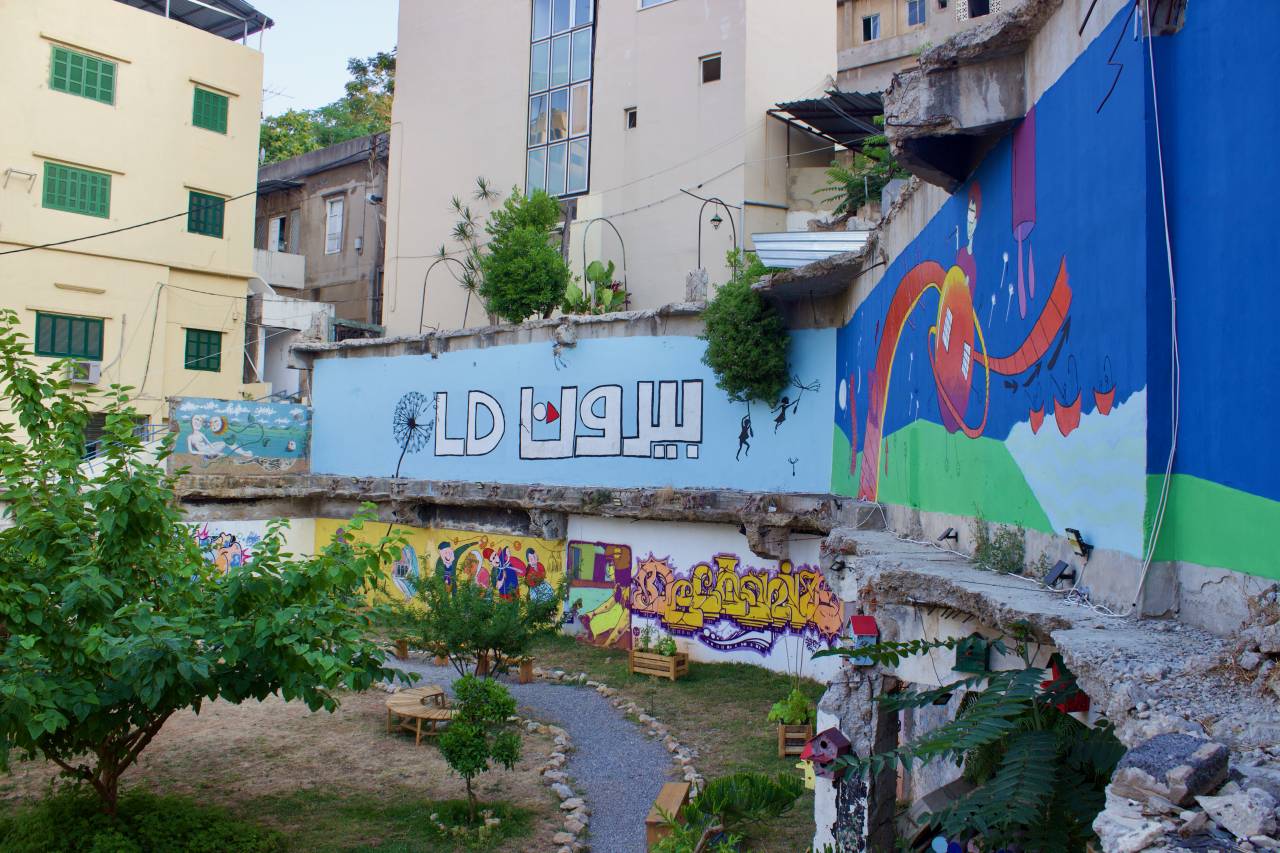 Some of the mural paintings after being repainted or touched up. (Credit: Richard Salame/L'Orient Today)

Part of the Mar Mikhael train station complex, which is still partly used as a bus depot and for offices for the threadbare Railway and Public Transportation Authority (OCFTC), is also slated to be turned into a park, according to plans unveiled by caretaker Culture Minister Wissam Mortada, caretaker Public Works and Transport Minister Ali Hamie, and OCFTC chair Ziad Nasr. That project is to be funded by the Italian Embassy via UN Habitat.

But unlike the planned park that will be created on the site of the old train station, the land underneath Laziza Park is not public property. Nor is it owned by the local groups that have come together to adopt it as their own. It remains private property of the Grande Brasserie du Levant and, as such, its future is inherently uncertain.

Theoretically, its owners could decide to build on the lot, demolishing the park. The local groups that are active in the park have had to accommodate this reality.

Grande Brasserie du Levant could not be reached for comment. Brasserie Almaza, which purchased the Laziza business in 2003, did not respond to a request for comment on whether there are plans for the land in the future. 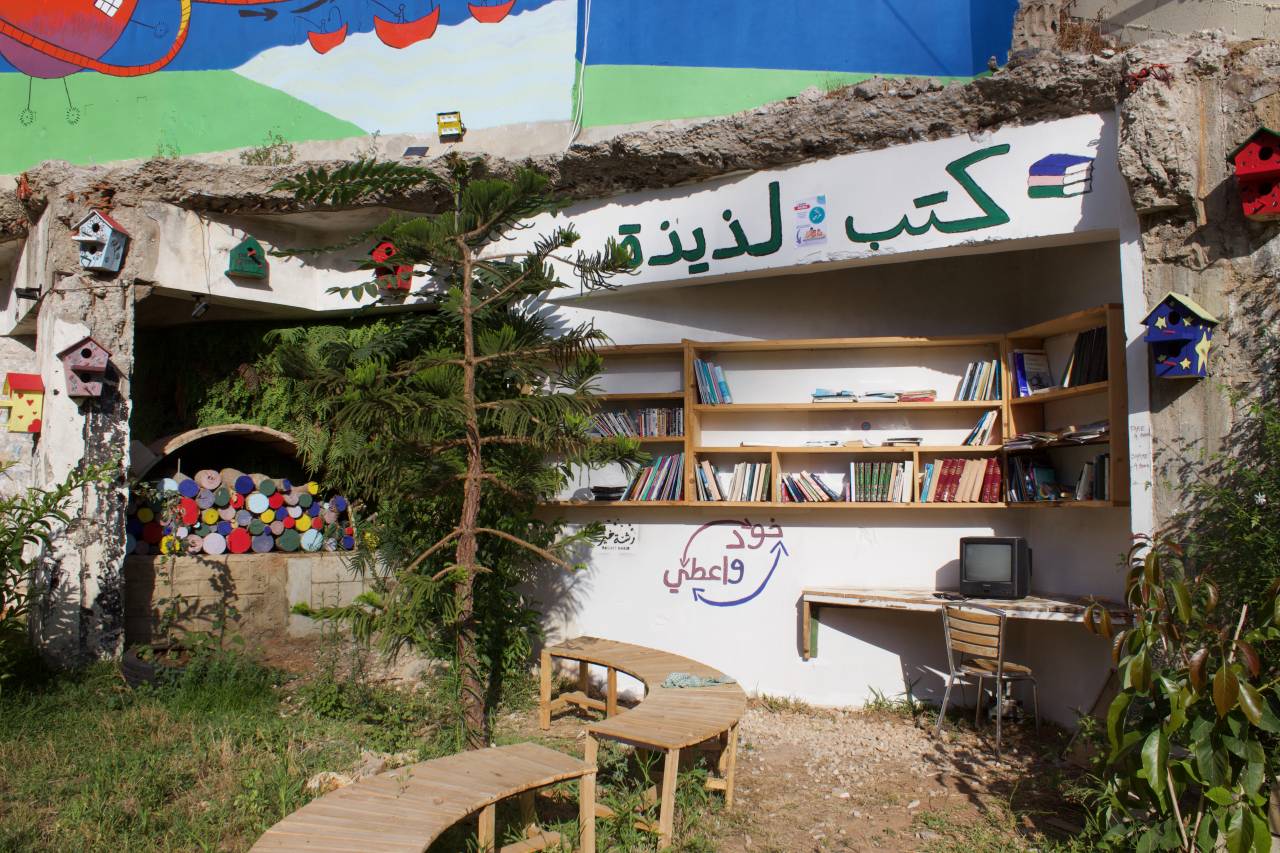 A small library inside the park encourages people to take a book and leave a book. (Credit: Richard Salame/L'Orient Today)

At one point groBeirut volunteers tried to build a roof over an improvised library they installed in the corner of the park, but they lacked permission from the municipality to construct the roof and the police stopped them, Hag Ali says. Planting, on the other hand, doesn’t seem to draw a response he says. “We learned we can plant in the garden but not build.”

“Everything that’s there is movable,” says Nahas, pointing to the fact that the plants were installed in boxes rather than in the ground. “It’s easy to transport, it’s easy to remove. In a couple of hours everything can be out, if [the owners] ever decide to do anything with it.”

Of course, in Beirut, even municipal ownership is no guarantee of a park’s longevity. The municipally-owned Jesuit Park in Geitawi — which houses one of the three municipal libraries in the city — was recently twice threatened with destruction in order to build a parking garage, in 2013 and 2017, but protests brought those plans to a halt.

In 2019, protests were not enough to save the historic Mufti Hassan Khaled garden in Tallet al-Khayat, which was demolished to build a parking garage. Citizens were promised that a new park would be built on top of the parking structure but, three years later, Beirutis have gotten nothing but another vacant lot full of trash — and no new parking.

A recent study in the journal Smart Cities found that 5.75 percent of Beirut’s territory is occupied by off-street parking lots. Parking lots occupy three times more land in the city than green spaces. Roughly half of the plot on which Laziza Park sits has been claimed by drivers as an informal parking lot.

In Laziza, the UN-funded project has ended but Rashet Kheir plans to continue hosting free events in the space, and they said they feel confident about maintaining the park into the future.

“We practically live next to it. So it’s like simply taking care of something that you call home.”

In any case, Nahas says, the neighbors have fully adopted the space and do plenty of cleaning, gardening, and watering without prompting.

The neighbors don’t always agree about what the best use of the space is, however. There have been ongoing arguments about whether or not dogs should be allowed into the park, for instance, given that some dog owners in Beirut do not regularly pick up after their pets. A paper sign warding off dog owners has been hung up and removed repeatedly.

Others gripe about young people engaging in inappropriate displays of public affection in the space.

Nahas said Rashet Kheir tried to help smooth over differences by forming a neighborhood committee made up of people from the area with a range of backgrounds. They’ve also hung up a sign telling dog owners to clean up after their pets and ensured there are no secluded corners where people can show a little too much affection in either park.

Many are still mourning the loss of the Laziza brewery that once stood here, although they appreciate its new incarnation as a public space.

Spaz and Exist, who say some of their artwork was lost in the destruction of the brewery and the renovation of the park, seemed to be coming to terms with the changes in the neighborhood.

“I’m glad it turned out like this, it was a mess before and still we used to chill here,” says Spaz.

BEIRUT — In early 2017, in the face of widespread opposition, a 1930s-era factory that was reportedly the oldest brewery in the Middle East was destroyed to clear the way for another of modern Beirut’s signature luxury apartment towers.Many Beirutis mourned the demolition of the historic Grande Brasserie du Levant, also known as the Laziza Brewery. An open letter penned by architects and...