The city is still in shock after a little girl died on Sunday under the rubble of a dilapidated building that collapsed. The residents are worried, given the state of neighboring buildings. 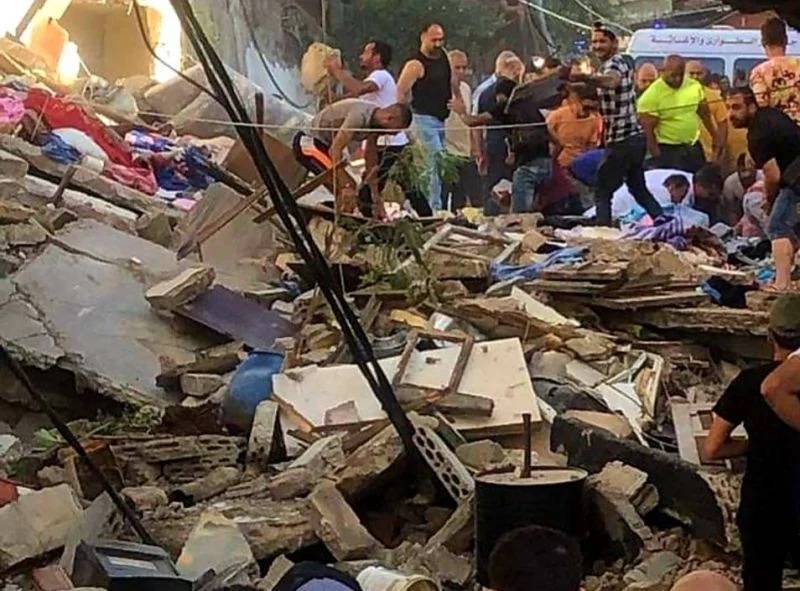 A crowd gathers at the site of a building collapse in Tripoli. (Credit: Photo sent to our correspondent Michel Hallak)

The residents of Tripoli’s Dahr al-Maghar neighborhood in the Qibbeh district of Tripoli, in North Lebanon, woke up yesterday filled with utter bitterness: a pile of rubble is all that remains of the building that collapsed the day before, in a tragedy that claimed the life of a little girl, Joumana Diko, and injured several people, including the victim’s mother, Lina Kammoun, and an elderly woman who was evacuated on a stretcher.

The inhabitants of Tripoli’s poorest neighborhood demonstrated their sadness and anger all night long. Many expressed fears that other buildings in the same street, which are all as dilapidated as Sunday’s ill-fated one, will fall.

The building was five stories high and in poor condition, with walls that had long since cracked. Most of its inhabitants had already deserted it, some recently and others two years ago. Only Khaled Diko and his family stayed there, even after an evacuation order was issued recently. They did not have the financial means that would allow them to move out, their neighbors said.

It is still unknown what precipitated the disaster, but two hypotheses have been circulating. The first is that the lightning that struck the building during Saturday’s short storm and that was followed by heavy rains weakened the structure.

The second is that six or seven days ago, a dump truck hit one of the construction’s pillars, which weakened the whole building. It was since that day that most of the inhabitants were encouraged to leave.

In the capital of the North, which is also the poorest city on the Mediterranean Sea, the building is far from being the only derelict one. Many other buildings could also collapse.

Yesterday, the chairwoman of the Lebanese Association of Properties, Andera Zouheiry, said that the building that collapsed is “one of 4,000 at risk,” of falling in Tripoli.

She also noted that “many buildings are on the verge of falling down, either because they were built a long time ago and have not been maintained ever since, because their owners are absent, or due to the lack of any serious control by the government which has encouraged the use of poor construction materials.”

Zouheiry said that due to the economic crisis, there is “higher risk of building collapse due to the high construction materials cost, while the poor salaries are not sufficient to carry out the needed restoration, strengthening and repair.”

‘We heard the cries and the calls for help’

The residents of the Dahr al-Maghar neighborhood are well aware of these risks. Out Nach’at, sitting on the rubble of the building, still cannot believe her eyes. This mother, in her 50s, lives in a neighboring building, which is also dilapidated and at risk of suffering the same disastrous fate.

Out Nach’at stares at the wreck, and the images of the tragedy continue to haunt her. “The building began to fall slowly, stone by stone, and then the collapse accelerated,” she said. “Within moments, it was over. We heard the screams and cries for help from the first minute.”

According to her, panic prevailed over the neighborhood from the very first moment. “Many people thought it was an earthquake and fled,” she said.

Joumana, the little girl who died in the incident, often played with the children of her relatives in this neighborhood where she ended up dying, due to the state’s failure to provide the Tripolitans with suitable houses.”

The complaints about the dilapidated buildings whose residents cannot afford to carry out repair works are multiplying in the neighborhood. This is what Jamil Ismail, an engineer and resident of a building next to the one that collapsed, said. “We ask the city officials to assume their responsibilities at this level,” he said.

Commenting on the buildings at risk, he noted that many have been erected illegally and in defiance of all laws and architectural principles. “We have already notified the municipality of Tripoli, especially the engineering committee, but to no avail,” he added.

The Directorate General of Antiquities is singled out for criticism

Tripoli municipality head Riad Yamak replied yesterday to the criticisms leveled at him. In a press conference, he denied “any responsibility” for the building’s collapse.

He blamed the Directorate General of Antiquities at the Ministry of Culture, saying that it “rejected any request for renovation of dilapidated buildings, even when the necessary sum was available, “ and adding “We have reiterated that dozens of times and we are repeating it today.”

Yamak called for “a transparent investigation to identify those responsible” for the tragedy and recalled that “the municipality was quick to dispatch the needed help and to take emergency measures to remove the rubble and stones, in order to pull out any victims.”

According to him, the building that collapsed “is one of those at risk in Qibbeh, Bab al-Tabbaneh and others, on which the municipality drafted detailed reports and submitted them to the relevant departments,” including the Directorate General of Antiquities at the Ministry of Culture and the Higher Relief Committee.

The residents of Tripoli’s Dahr al-Maghar neighborhood in the Qibbeh district of Tripoli, in North Lebanon, woke up yesterday filled with utter bitterness: a pile of rubble is all that remains of the building that collapsed the day before, in a tragedy that claimed the life of a little girl, Joumana Diko, and injured several people, including the victim’s mother, Lina Kammoun, and an elderly...