An article in Yediot Aharonot highlights the extent of Israel’s role and involvement in the 1982 massacre in Beirut. 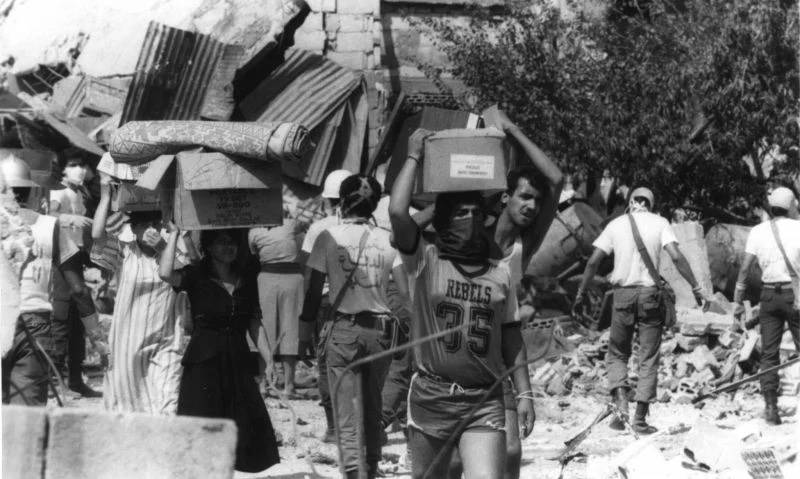 Sept. 21, 1982: Palestinian refugees from Sabra and Chatila, taking what they were able to salvage from their homes. (Credit: OLJ Archives)

Israel’s major daily Yediot Aharonot published Friday a report by Ronen Bergman, an Israeli investigative journalist, underlining Israel’s role in the massacre that was perpetrated in the Palestinian camps of Sabra and Chatila, south of Beirut, on Sept. 16, 17 and 18, 1982.

The carnage took place two days after the assassination of then President-elect Bashir Gemayel on Sept. 14 of the same year in Beirut’s Achrafieh area. To this day, there is no exact count of the number of victims killed in the slaughter.

The official report of the military court prosecutor, Assaad Germanos, puts the death toll at 460, a figure far below the 5,000 victims put forward by Palestinian sources, including missing persons.

Meanwhile, the Israeli commission of inquiry into the events at the Beirut camp, known as the Kahan Commission, reported that “with regard to the exact number of victims, it seems we cannot base ourselves neither on the document of Lebanese origin nor on the figures put forward by certain Palestinian sources,” estimating that “the total number is less than 1,000.”

The Israeli army intelligence services, for their part, estimated the death toll at between 700 and 800 people.

These numbers remain a far cry from the figures put forth by Israeli journalist Amnon Kepeliouk, author of “Sabra and Chatila, Inquiry Into a Massacre,” who puts the figure at 3,000 to 3,500 victims, after cross-checking several sources.

According to Israeli sources, the massacre was perpetrated on the orders of Elie Hobeika, who would later become the head of the Lebanese Forces, a militia at the time.

Hobeika was in charge of the militia’s intelligence in the wake of the Israeli troops' advance into West Beirut.

The Kahan Commission, charged on Sept. 28, 1982, by the Israeli government with investigating the events, concluded in 1983 that the Christian militias were directly responsible, but also that Israel was indirectly responsible for the carnage.

According to the investigators, then-Israeli Defense Minister Ariel Sharon failed to take “appropriate measures” likely to avoid the massacre.

Local Israeli media have recently shared large excerpts from the Bergman report, which is allegedly based on Israeli government archives.

These documents reveal, among other things, that a secret meeting took place on Sept. 19, 1982, between Lebanese Christian leaders on the one hand, and Eytan, Amir Drori, former IDF commander of the northern area, and Menahem Navot, former deputy head of Mossad, on the other.

The Bergman report states that “the meeting took place for coordination purposes between the two parties, in order to establish a unified version of the facts to be presented to the international community.”

It was indeed necessary to contain the reactions to the massacre, in particular by trying to mitigate the impact of the publication of sensitive images of the mutilated bodies of children and women.

“Rafael Eitan did not care about the moral aspect,” Bergman said, adding that he was mainly afraid that Israeli forces would be forced to withdraw from Beirut.

“Say that your fighters participated at the camps as part of a combat mission against the Palestine Liberation Organization guerrillas, and that events then quickly got out of hand. Blame it on the anger of your fighters who were livid after the assassination of Bashir Gemayel,” Eitan reportedly told his Lebanese interlocutors.

Bergman also reported that one of the Lebanese officials urged the Israelis to ask the media in their country not to accuse Christian militias by name in their publications.

“It is impossible for us to acknowledge that [we] perpetrated these acts,” the Lebanese official allegedly said.

“What will you do then?” Eitan reportedly asked him. The Lebanese official replied, “We will continue to deny it.”

“How would this be possible? The camps were full of journalists [...]. The truth is out,” Eitan said.

Meanwhile, Drori allegedly suggested putting forward “a false version” that “when [the militia] entered the camps, internal fighting was already taking place between different factions that resulted in casualties.”

What’s more, the Yediot Aharonot article mentioned earlier plans concocted by Sharon, Eitan and the Christian militias to occupy the Lebanese capital by means of a joint military operation.

On July 11, 1982, Sharon allegedly said it was necessary to annihilate “the southern part of Beirut (where Palestinian camps and PLO fighters were based).

These words appear to be the antithesis of the official position that he took before his government. “I do not suggest any attack on Beirut,” he repeatedly declared.

According to the article, immediately after theassassination of Bashir Gemayel, Sharon got the green light from then-Israeli Defense MinisterMenachem Begin to occupy West Beirut, but the Israeli government was not informed until after the invasion of the Lebanese capital.

The setbacks of the Israeli army in the face of resistance operations caused Begin to suffer from “severe depression ... coiling into himself after having understood that Sharon had deceived him and had plunged Israel into a quagmire,” according to the article.

“The war for which the Israeli army and intelligence services had long been preparing ... finally became one of the greatest disasters for Israel, since it placed the Middle East in a different direction than planned,” the article reads.

As a result of such a major failure, “Lebanon became Iran’s long arm and the Islamic Revolution spread [in the country] through Hezbollah,” Bergman concluded.

Israel’s major daily Yediot Aharonot published Friday a report by Ronen Bergman, an Israeli investigative journalist, underlining Israel’s role in the massacre that was perpetrated in the Palestinian camps of Sabra and Chatila, south of Beirut, on Sept. 16, 17 and 18, 1982.The carnage took place two days after the assassination of then President-elect Bashir Gemayel on Sept. 14 of the same...

The last Jews of Lebanon, a life shrouded in secrecy