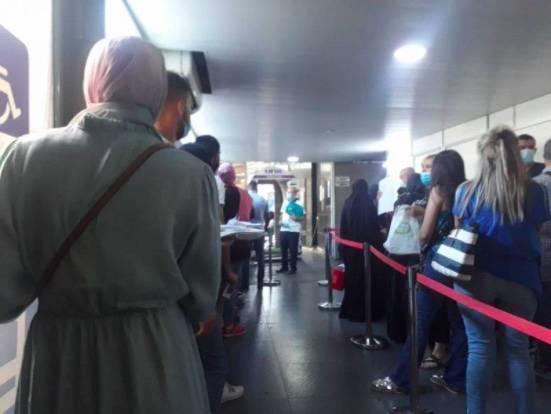 BEIRUT — “This feels like one big nightmare,” Dana Ahmad said.

A Lebanese citizen, Ahmad wants to renew her passport to travel to France and reunite with her brother, who she hasn’t seen since 2020.

“After COVID-19 took the world by storm, this was supposed to feel like a ‘normal’ restriction-free summer,” Ahmad told L’Orient Today. “Yet I guess normal is too hard for us to have as Lebanese.”

Even though General Security announced via its Twitter account on Friday that it would from Monday resume accepting online applications for passport renewal appointments, there is little expectation that new passports will be issued with any expediency, leaving many citizens’ plans for work, leisure and life in limbo.

In April, General Security announced that the number of passports it had available to issue had dwindled, even as requests for new passports had increased tenfold over the past two years. Appointments for passports and passport renewals were therefore suspended.

But even prior to the suspension of appointment applications, appointments granted were generally months in the future, and severe electricity outages and fuel shortages forced many Lebanese to wait for hours, sometimes overnight, to apply for and/or receive their passports.

General Security chief Maj. Gen. Abbas Ibrahim said in December that Lebanon had been struggling to cope with up to 8,000 daily requests for new passports. This struggle and its resultant delays have caused considerable anguish for some families.

Shady Jabbour and his sister Diana had planned on accompanying their mother on a trip to Spain that she needed to make in order to receive urgent medical treatment.

“The platform … has been suspended, so my 60-year-old mother has to go alone to a hospital in a foreign country,” Diana said tearfully, speaking prior to Friday’s announcement.

But even for those with appointments, a problem-free passport renewal is far from a foregone conclusion.

Samer Khoury, who works in waste management and agriculture, had applied for a German organization’s summer school classes in Morocco.

The school accepts one person from the Arab world each year, and he was chosen after a thorough, monthslong selection process, he explained

“The school starts on June 27,” Khoury told L’Orient Today, “and my appointment to renew my passport is in November.”

Khoury decided to head to General Security at 5 a.m. with a paper from the German institution stating that he urgently needs to renew his passport.

It was complete chaos, he said, “and despite being there early, there was a long queue ahead of me.”

Ultimately, General Security refused to make an exception for him.

After Khoury posted his story on social media, a friend contacted him and offered to trade appointments with him, since she wasn’t in a hurry to obtain her passport.

They headed together to the agency’s offices, but to no avail. General Security refused to swap their appointments.

Only after Khoury lost his temper did the staff accept his documents, assuring him that an exception would be made for him.

As this story went to press, General Security had still not contacted him.

A General Security spokesperson told L’Orient Today that there are thousands of applications awaiting processing since the two-month suspension began.

That said, he reassured the public that anyone in urgent need of a passport could submit the necessary documentation, and that they would receive the earliest possible appointment to have their application processed.

This earliest opportunity is still likely to come too late for those hoping to take vacations abroad this summer. School teacher Farah Haidar lamented this, explaining that a domestic vacation is much poorer value for money.

In recent months, many touristic establishments including hotels and guesthouses have switched to issuing prices in US dollars in the face of the fluctuating value of the national currency, which has in less than three years lost more than 90 percent of its value.

The currency’s collapse has driven three-quarters of the population into poverty, according to the UN.

A Gallup poll in late 2021 revealed that 63 percent of Lebanese would like to permanently leave the country in the face of worsening living conditions. An Arab Barometer survey, published in April, meanwhile showed that poverty is the main reason for seeking to emigrate for only 7 percent of Lebanese, while 44 percent cite corruption as the dominant reason for their desired departure.

Once an accountant at a business in Hamra, Dareen Khorbatli abruptly found herself unemployed last summer when the company closed.

Since then, she has desperately tried to find work abroad. Things seemed to be looking up in May when she got a job offer from a company in Oman.

The process has been stalled, however, as General Security has not yet been able to issue her a passport, even though she has submitted the required documents.

“It’s like the government would do everything in its capacity to make sure you think of leaving without turning back,” Korbatli concluded, “but then won’t give you the means to leave.”

BEIRUT — “This feels like one big nightmare,” Dana Ahmad said. A Lebanese citizen, Ahmad wants to renew her passport to travel to France and reunite with her brother, who she hasn’t seen since 2020.“After COVID-19 took the world by storm, this was supposed to feel like a ‘normal’ restriction-free summer,” Ahmad told L’Orient Today. “Yet I guess normal is too hard for us to...