The government communicates but with little clarity, Salameh offers an update: Your weekly financial news roundup 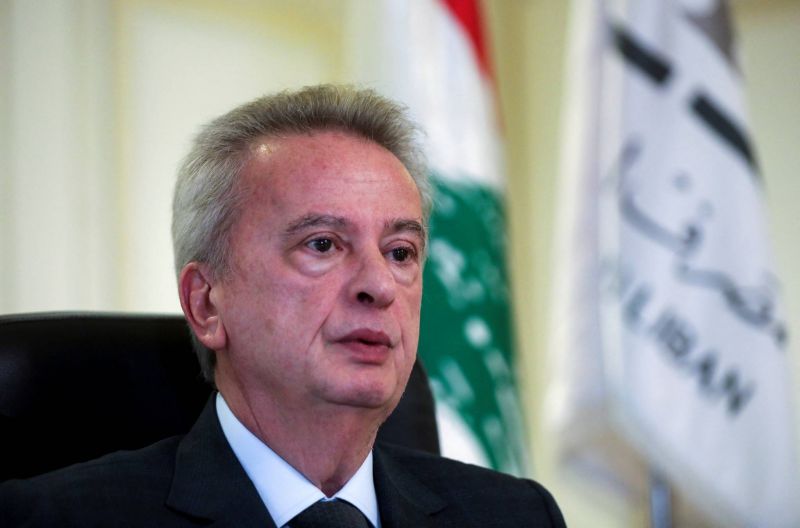 Lebanon's central bank governor Riad Salameh speaks during an interview for the Reuters Next conference, in Beirut on Nov. 23, 2021. (Credit: Mohamed Azakir/Reuters)

BEIRUT — The elections of Nabih Berri as parliament speaker and Elias Bou Saab as his deputy on Tuesday morning dictated the media’s agenda for the remainder of the week. The broadly expected — at least by the morning the voting rolled round — results prompted a flood of analysis from the so-called political experts. Several blamed the 13 newcomer MPs for the old guard’s continued state capture, a condition that has plagued the country since before some of them were even born, while others applauded the democratic process and celebrated a Parliament reinvigorated by the new blood.

But let us for a second put the elections on the side and disregard the stomach-churning volatility of the Lebanese lira, and — since we are being awfully generous today — let us give a break to central bank chief Riad Salameh and forgive Banque du Liban’s futile intervention in the currency market and its squandering of our last dollars. Instead, let us take a moment to appreciate the government’s latest Eureka moment.

Their hijacking of some prime-time programming this past week suggests that they may have arrived at the brilliant conclusion — probably fallacious and definitely a tad late — that the only challenge, to what could still end up being a flawless performance, was simply a clear and a timely communication strategy.

Apparently, more than 2.5 years into the country’s economic collapse, they intuited it was time to go on the offensive and work on spreading awareness about the economic recovery plan and the Financial Sector Rehabilitation Strategy (FSRS), or “Al Khotta” in Arabic.

They reckoned that after furtively approving the 2022 budget, botching the capital control draft law procedures and missing an early opportunity to come forward with their economic recovery plan, it was now time to work on proselytizing to the Lebanese on the inevitability of an emergency bank resolution law and apprising them of the fate of their deposits.

In successive media appearances, government officials graced the stages of several TV stations. The first such show was broadcasted by LBCI on May 29 and starred the former MP Nicholas Nahas, a close advisor to caretaker Prime Minister Najib Mikati. Nahas went to great lengths trying to expand on the merits of the “Khotta,” and how it is our only salvation.

Immediately after was the turn of caretaker Deputy Prime Minister Saade Chami. He also appeared on LBCI and answered questions for about two hours on issues related to the government’s “Khotta”, the $100,000 state deposit guarantee and the ongoing discussions with the International Monetary Fund about the establishment of a sovereign wealth fund.

Then on May 31, Mikati appeared on Al Jadeed television channel and gave the same spiel, in the meantime Chami was being hosted by Universite Saint Joseph to provide some clarity on depositors’ rights.

Some communication and transparency from the government is definitely better than none, but what would be even better is that officials get their stories straight, talk from the same script and stop jumbling their numbers. Is it 1.2 million accounts that will benefit from the guarantee or 2.2 million? Will gold be sold to pay back depositors or is it an untouchable state asset? Will the $100,000 guarantee apply if the bank is insolvent, or will it be decided on a per bank basis? And so many similar discrepancies that raise more questions than they answer.

It would be also interesting to progress from the realm of the “inshallah” to the field of probability. The way things are being managed, the eventuality of seeing any meaningful advances on the proposed reforms remains slim at best. Every stakeholder in the Lebanese economy has not only rejected the plan but has been appalled at the draconian measures it imposes. The Association of Banks in Lebanon called it “disastrous” and accused the government of “erasing with a pen” the depositor’s money “despite the existence of alternative clear solutions.” Depositors don’t even want to hear about it and MPs will not even touch it with a ten-foot pole. The government is finding out gradually that the only receptive audiences are itself and the IMF.

It wasn’t long before Salameh figured out what was happening and decided to take a page from the government’s playbook. In an orchestrated, but made to seem impromptu media appearance, scheduled, as have been most of his bombshell intervention announcements, for late Friday afternoon, the governor revealed that the central bank’s reserves stood at $11.8 billion.

He explained that the central bank held euros as part of its foreign currency portfolio and the $200 million drop can be explained by the euro’s depreciation against the dollar. However — and so much for giving Mr. Governor a break today — the difference in the exchange rate between the end of April and the end of May reveals that the euro actually strengthened from 1.0540 to 1.0730. So mathematically the argument does not hold water.

Salameh also stated that the central bank has opened an investigation into possible insider trading in Eurobonds in a bid to unmask the identity of individuals who could have illicitly benefited from the government’s decision to default on its debt.

He also rebuffed the idea of selling the gold to pay back the depositors and said no serious study has been conducted so far to assess the value of the other state assets.

However, the highlight of the show was when Salameh was asked about the approach to be followed for the allocation of the losses incurred by the financial sector. He answered that the government has not shouldered its fair share and went on to break down the $68 billion loss inflicted by the government on the central bank between 2010 and 2021.

Some $24.5 billion went to pay for fuel and electricity; $8.3 billion was paid to assure the day-to-day functioning of the government; $7.5 billion wasted on subsidies; and a $7.5 billion loss was incurred on the Eurobonds portfolio. These total $47.8 billion, to which $20.5 billion in interest must be added.

Salameh explained that the central bank had no say in why or how the money was spent, and all it did was comply with the different law-backed requests by the government.

Salameh ended his media intervention without answering the question on how long the central bank can continue supporting the lira and by complaining that Judge Ghada Aoun, who has brought charges of illicit enrichment against the governor, has been making fun of him in Parisian restaurants.

P.S. The election of the parliamentary committees is scheduled for Tuesday at 11:00 a.m.

BEIRUT — The elections of Nabih Berri as parliament speaker and Elias Bou Saab as his deputy on Tuesday morning dictated the media’s agenda for the remainder of the week. The broadly expected — at least by the morning the voting rolled round — results prompted a flood of analysis from the so-called political experts. Several blamed the 13 newcomer MPs for the old guard’s continued...