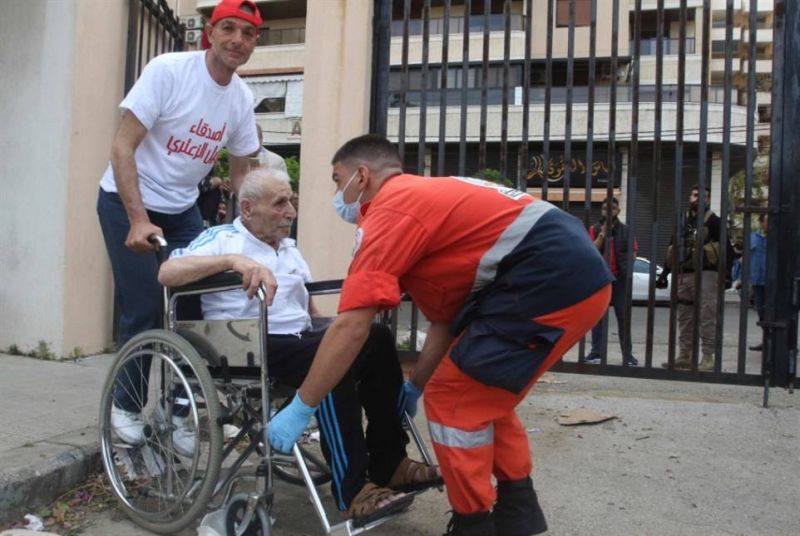 A civil defense worker and a political party delegate carry a voter to a polling station in Saida, during the May 15 2022 legislative election. (Mahmoud Zayyat/AFP)

BEIRUT — With elections now over, Lebanon is still grappling with its inaccessible polling stations. Many have criticized the lack of accessibility on May 15, which either prevented people from voting or made it hard t0 do so.

As with the previous election cycle, reports emerged of voters unable to cast their ballot due to the inaccessibility of stations. Though the EU Observers’ report noted that ​51 percent of stations they visited had voting facilities on the ground floor, which represented an improvement over 2018, 43 percent of the stations were inaccessible to people with reduced mobility. This led to scenes of wheelchair users not being able to access polling stations and elderly voters being carried up flights of stairs in stretchers.

Sylvana Lakkis, president of the Lebanese Union for People with Physical Disabilities, told L'Orient Today on election day that political parties stepped in to facilitate voting by carrying people to voting booths. A report released a week prior by Human Rights Watch said that such interventions are not acts of benevolence but a way to influence voting intentions.

Article 98 of law 220 stipulates that “during the preparation of all electoral processes, legislative, municipal and others,” the needs of people with disabilities should be taken into consideration to facilitate the process.

But this is far from reality, says Itab Shuayb, an inclusive design specialist at the Center for Lebanese Studies (CLS) and author of Inclusive University Built Environments. She says that article 98 has not been fully implemented since the law was passed almost 20 years ago.

Shuayb gave L’Orient Today her assessment of the steps that could be taken to improve accessibility next time around.

Despite the 51 percent figure cited by the EU, “all polling stations should be accessible, even ones with zero-step entrances.” Where there are stairs, she said, ramps should be available that are designed with a gentle (not steep) gradient with handrails on both sides. Additionally, the voting booth should be accessible for navigation and should be at a wheelchair-appropriate height.

Shuayb said that people being carried was undignified and prevented them from independently voting. It also endangered their safety, as many of the political delegates had little experience in carrying people, like in a hospital setting, thus putting many voters at risk of falling.

Additionally, a wide range of users, including the elderly and those with visual and hearing impairment or learning impairment should be taken into account. So although ramps and elevators should be considered in the built environment. “Accessibility should be for all, not just for one category of people,” Shuayb added. “That's what we mean by inclusion.”

Proper signage with illustrations are also needed in polling stations, she said, because people with hearing impairment and dyslexia rely on them. “They just follow the signs and they can vote independently and safely.”

Moreover, Shuayb added, visually impaired people and those with cognitive disabilities should have an assistant who they have chosen and trust, to help them vote. This was abused in some instances when party delegates entered polling booths under the pretense of assisting people with disabilities in voting, but actually “impos[ed] their voice” in the process.

Moreover, while some polling stations dedicated ground-floor booths for physically challenged users, they failed to include the elderly, many of whom have mobility problems and cannot walk upstairs.

“What happens to them when they are not allowed to use the accessible places for wheelchair users? For me they should be permitted to do so,” Shuayb said.

Ensuring that polling stations are accessible is not such a daunting task, Shuayb says. It just needs preparation. Despite the economic crisis, organizers should at least ensure that “selection could be done knowing which schools are more accessible than others.”

In terms of the actual cost of making these places accessible, she said it depends on “the type of school and whether it has a lot of barriers or not,” but overall it does not cost that much. However, costs can be reduced if buildings are accessible from the start, which is much cheaper than enhancing them. Shuayb noted that CLS set out guidelines for rebuilding inclusive schools in the wake of the blast.

She did note that polling stations for Lebanese living abroad — particularly in Istanbul, where she cast her vote — were more accessible than those in Lebanon. But this had more to do with countries’ local building codes and regulations than with the Lebanese consulate's choice of locations.

With the municipal elections next year, Shuayb believes that the government needs to think of the matter holistically. Elections should not just be about “only ticking the box,” but also about how “we can make things easier for everybody so that everybody can vote, without being segregated or humiliated.”

BEIRUT — With elections now over, Lebanon is still grappling with its inaccessible polling stations. Many have criticized the lack of accessibility on May 15, which either prevented people from voting or made it hard t0 do so. As with the previous election cycle, reports emerged of voters unable to cast their ballot due to the inaccessibility of stations. Though the EU Observers’ report...