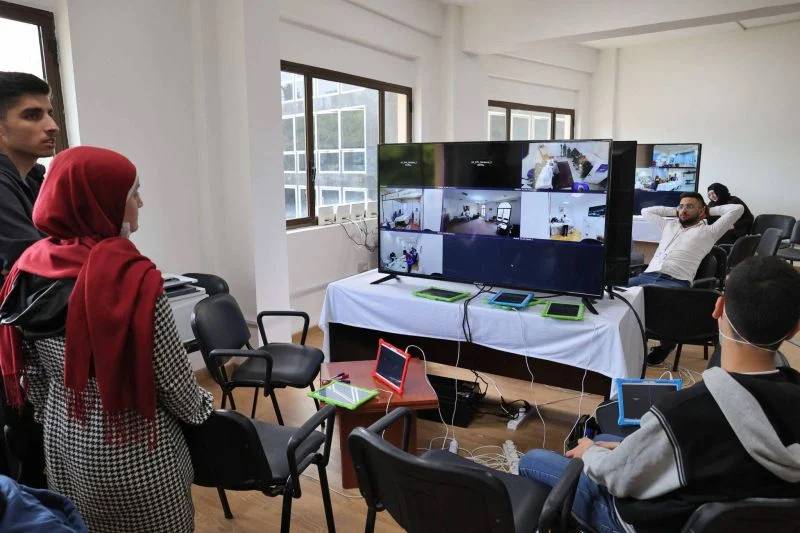 In the operations room at the Ministry of Foreign Affairs in Beirut, May 6, 2022, on the first day of legislative elections in 10 countries of the Near and Middle East. (Photo: Anwar Amro/ AFP)

The ballot boxes will be sent by DHL to the Beirut airport, with the exception of Syria and Iran. The ambassador of Lebanon in Tehran was set to bring the boxes to Beirut personally, arriving at 8 a.m., where they would be received by members of the Internal Security Forces, and then they will be transferred to the Banque du Liban headquarters for safekeeping; while the chargé d’affairs of the Lebanese Embassy in Damascus was deliver the boxes at 1 a.m. to the Lebanese border, to be received by the Internal Security Forces and handed over to the central bank.

• "All problems and issues have been resolved, and there is nothing left to prevent the continuation of the election process," Bou Habib said. "There were several violations, but they were stopped immediately."

• Prime Minister Najib Mikati visited the operations room of the Foreign Affairs Ministry to inspect the progress of the parliamentary elections in the Arab and Islamic countries, where Friday is a weekly holiday.

• After the visit, Mikati said: “I was briefed on the progress of the electoral process in the countries where Friday is considered a weekly holiday, as well as the statistics and all follow-up. I congratulated the Ministry of Foreign Affairs and the diplomatic corps and thanked the student volunteers.”

• On Sunday, May 8, the European Union Election Observation Mission to Lebanon will deploy 16 teams of short-term observers to directly observe Out of Country Voting, EU EOM wrote in a statement.

• “Meanwhile, both today [Friday] and Sunday some core team analysts and LTO teams will take shifts at the operation center, at the Ministry of Foreign Affairs in Beirut, to observe the procedures in place. On 15 May, the EU EOM will be present at the counting and tabulation of the ballot boxes coming from abroad,” the statement declared.

• On Friday, the Ministry of Foreign Affairs live broadcast of voting from abroad stopped for more than 15 minutes, tweeted the Lebanese Association for Diplomatic Elections.

• “So far, we have counted three notable offenses: the installation of a tent affiliated with a political party, calls for a partisan vote in an electoral station in Jeddah, and finally a partisan rally outside a polling station in Riyadh,” Rony el-Assaad, Secretary General of Lebanese Association for Democratic Elections, told L'Orient-Le Jour. The ballot of one expatriate in Riyadh was canceled because he had photographed his ballot inside the voting booth, which is prohibited, said Lebanese Ambassador to KSA, Faouzi Kabbara.

• Bachir Chehab, CEO of the French company JCDecaux, an advertising specialist, is voting for the first time from Oman, the country that hosts a community of 4,000 Lebanese. Chehab told L’Orient-Le Jour that he saw delegates from the ruling political parties, mainly from the Lebanese Forces and the Free Patriotic Movement.

• “The Aounists wore … orange T-shirts. The FL [wore] pins. There was no one from the thawra or the opposition, or at least according to our observations,” he noted.

• Speaking from the Bustros Palace, Foreign Minister Abdallah Bou Habib hoped that the participation rate “will be very good,” adding that at least 70 percent of those registered, will cast their vote by the end of the day.

• “We are following up on the process with the whole team,” said Interior Minister Bassam Mawlawi. He predicted that the participation rate will be high.

• Mawlawi said that he proposed to the cabinet on Thursday to allow expired passports to be renewed for only one day for voting, adding that this proposal was rejected. “I will try to propose this again next Thursday,” the minister promised.

BEIRUT — After the close of polls on Friday for diaspora voting in 10 countries in the region, Foreign Minister Abdallah Abou Habib said 18,225 out of 30,930 registered Lebanese expats had voted, although the results are still preliminary. Polling stations for Lebanese residents of Iran and nine Arab countries, namely Oman, Saudi Arabia, Qatar, Bahrain, Kuwait, Syria, Jordan, Iraq and Egypt,...

Lebanon loses some $25 million for each day of delay, PM-designate Mikati says