Tripoli tragedy survivor: 'I promised my children a better life, and now they are dead'

The still incomplete toll of the sinking of a boat off Tripoli shows seven dead and 33 missing, according to security sources 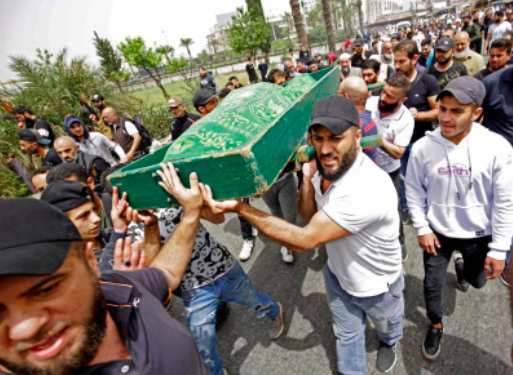 Angry relatives during the funeral of one of the victims of the tragedy in Tripoli. (Credit: Ibrahim Chalhoub/AFP)

Mohammad Dandachi burst into tears before he could finish his sentence. "I promised my children a better life, and now they are dead. The youngest was forty days old.” The young Lebanese man lost his three children when a makeshift boat sank off the coast of Tripoli on Saturday night after an apparent collision with an army patrol boat. The boat was carrying around 85 illegal migrants seeking to leave Lebanon for Europe.

According to the army, the boat was loaded with eight times its maximum capacity. Initially, some 45 people were rescued, while the body of a two-year-old girl was recovered. Other bodies surfaced later, in Tripoli or in more distant localities such as Chekka, bringing the number of dead to seven yesterday. The list of the missing still included 33 names, according to security sources interviewed by L'Orient-Le Jour. On Monday, the search continued by sea, land and air, but the hope of finding survivors was diminishing by the hour.

"It was desperation that drove me to put my family on that death boat," Mohammad sobbed. He speaks on behalf of all those who found themselves on this makeshift boat, trying to escape the misery of Tripoli, the poorest city in Lebanon, mired in the most serious economic crisis in its modern history.

Preferring to remain anonymous, the mother of one of the survivors, who is waiting for news of her second son who was also on board the boat, blames Prime Minister Najib Mikati, who also comes from the capital of North Lebanon, for the tragedy. “My children have been looking for a job for a long time in vain," she said. They decided to flee the difficult living conditions here. Too often they had to sleep on an empty stomach or skip a meal during the day. Najib Mikati, she added, "poses as a leader of the city, but he has never presented a single project that could lift it out of poverty! On the contrary, he has joined forces with Hezbollah and the Free Patriotic Movement to impoverish it, instead of defending its rights.”

The two-level boat was built in 1974, was 10 meters long and three wide, and had a maximum capacity of 10 passengers, according to the army. The circumstances of the embarkation of more than 80 people on board, adults and children, are becoming clearer.

According to information obtained by L'Orient-Le Jour, including from survivors, the man responsible for organizing this crossing of death is a certain A.T.D. The man, who was also on the boat with his wife and children, had promised the passengers — mostly Lebanese (mostly members of his own family), but also Syrians and Palestinians — a crossing to the Italian coast, the country from which the migrants were supposed to reach Germany. According to several survivors, he demanded $1,000 per person, claiming that the boat had to be fitted out and equipment purchased to make the journey "safe." Many sold what little they had to embark on this Mediterranean crossing.

It was around 10 p.m. on Saturday that the first reports of a shipwreck off the coast of Tripoli began to circulate. The survivors quickly pointed an accusing finger at the army, blaming a military boat that had obstructed their path. Rinas, a young Syrian who is one of the survivors, says that the military boat approached them near Palm Island off Tripoli, asking them to stop their journey. It was while trying to escape that the boat driver collided with the military boat. Due to the overload on board, the small boat took only a few seconds to sink, according to this survivor.

The circumstances of the tragedy have plunged the families of the victims and the survivors into a deep anger that did not take long to boil over, especially where most of the victims come from. There were clashes on Sunday with the army, which was trying to restore order, before a precarious calm returned on Sunday evening. This calm still prevailed in the battered city on Monday morning. Other demonstrations took place in Beirut and Saida, to denounce the deterioration of living conditions that drive some people to such acts of desperation.

The army gave its version of the tragic incident at a press conference held by Gen. Haissam Dannaoui, commander of the navy. He explained that there were no life jackets or buoys on board the boat. In response to the accusations, he explained that "the army tried to prevent the boat from continuing, but it was too fast," adding that it was "too loaded to move away from the shore. He also said that the army did not open fire. According to General Dennaoui, the military tried, in vain, to convince the migrants to turn back. "The maneuver made by the boat driver to escape us caused the collision," he said. 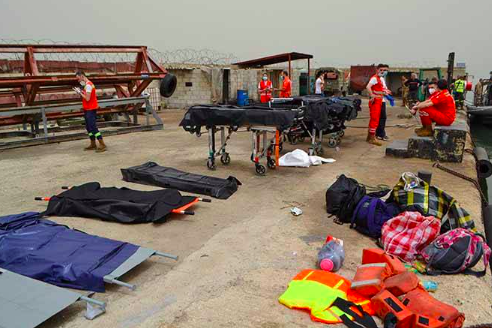 Rescuers ready to collect survivors on the coast of Tripoli, April 24, 2022. (Credit: AFP)

Posters of those responsible

This tragedy is far from being the first crisis, linked to poverty, that has shaken Tripoli. Earlier this year, there was a scandal of young people being lured to Iraq by terrorist organizations, who were said to be fleeing poverty and the continuous pursuit of law enforcement. The capital of North Lebanon has also often been the departure point for desperate migrants in the past.

For Khaldoun al-Charif, a Tripolitan politician, "This new drama is also the result of successive crises resulting from poverty, lack of development, but also from the security pressure and the demonization of its sons, which literally suffocate" Tripoli.

"Why would the sons of this city not want to flee when the electricity has been cut off for a week, water is no longer distributed and they wake up every morning to a new dizzying rise in prices?” he pondered. "These illegal immigrants are hungry. They know who pushed them to the limits of death, disease and darkness. They look at the pictures of those responsible on giant posters hanging above their dilapidated neighborhoods.”

Two international organizations, the Office of the United Nations High Commissioner for Refugees and the International Organization for Migration, issued a statement in which they confirmed that the passengers on board the boat were "no less than 84," expressing "their deep sadness" because of this tragedy. The text states that since the beginning of the year, at least three similar boats have attempted to reach Europe from the Lebanese coast, with no less than 64 people on board. Two of these boats were intercepted in Lebanese waters.

Mohammad Dandachi burst into tears before he could finish his sentence. "I promised my children a better life, and now they are dead. The youngest was forty days old.” The young Lebanese man lost his three children when a makeshift boat sank off the coast of Tripoli on Saturday night after an apparent collision with an army patrol boat. The boat was carrying around 85 illegal migrants seeking...