Inside the world of Samer Halwani, a Lebanese collector of vintage cameras

Each piece in Samer Halwani's collection tells an even more extraordinary story than the last, some of which take the visitor back to concepts they thought were the product of a more recent era 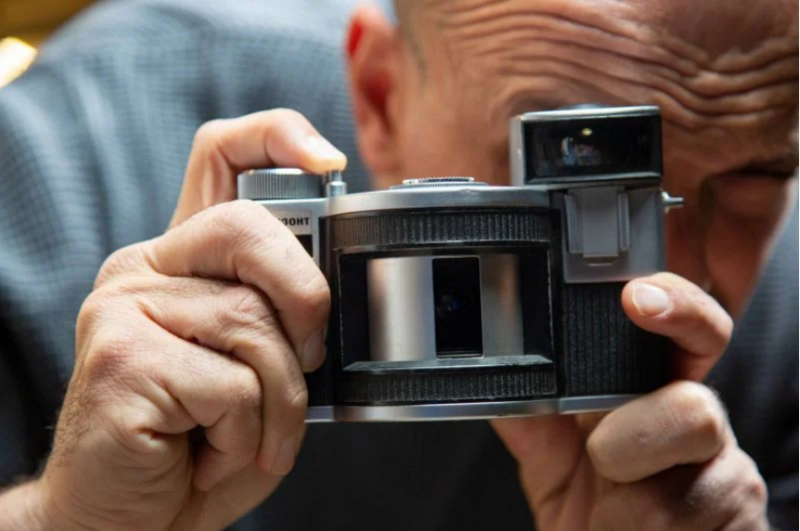 People tend to forget. Therefore, the camera and its cousin, the video camera, are considered to be among the most emblematic artifacts of the past two centuries — a tale that Samer Halwani knows like the back of his hand, from the introduction of the daguerreotype in 1839 to the glory of analog photography four decades ago.

This photography aficionado is a father and a manager of a food imports and distribution company in Lebanon.

Halwani also holds a diploma in photography — his yearslong consuming passion — and owns an exquisite collection of some 500 cameras, in addition to accessories, as well as some rare pieces.

“I only focus on cameras that were designed and marketed between the end of the 19th century and the 1980s, which saw the birth of the first digital cameras,” Halwani told L’Orient-Le Jour, enthusiastically displaying some of his treasures in his family apartment, located in one of the towers overlooking the Koraytem neighborhood in Beirut.

The rest are stored in his studio, which has been converted into a photo lab.

“In Lebanon, there are not many of us who collect cameras. My collection may seem imposing, but it remains modest compared to those of great foreign collectors who sometimes have several thousand pieces,” he added.

The first camera in his collection was one of the first series of Polaroid cameras, which he found in a flea market in Vietnam in 2004, where Halwani worked for two years.

The Polaroid camera, which develops prints shortly after taking the picture, was devised in 1943 by the hands of Edwig H. Land, who came up with the idea when his 3-year-old daughter, Jennifer, asked him why she couldn’t see the pictures he took right away. At the time, prints took several days to be developed.

The technology would be perfected four years later, and it would be another year before the Model 95 — the first offspring of this series of cameras, now rendered totally obsolete by technology — was released.

“When I bought this Polaroid 80A from 1957, I didn't think I would start collecting this type of object. Then ‘appetite came with eating,’ as they say,” Halwani explained.

“I started to go to the flea markets, buying and collecting old cameras as I traveled. In 2010, I already had about 10 pieces and I was able to fill my first shelf,” he recalled. 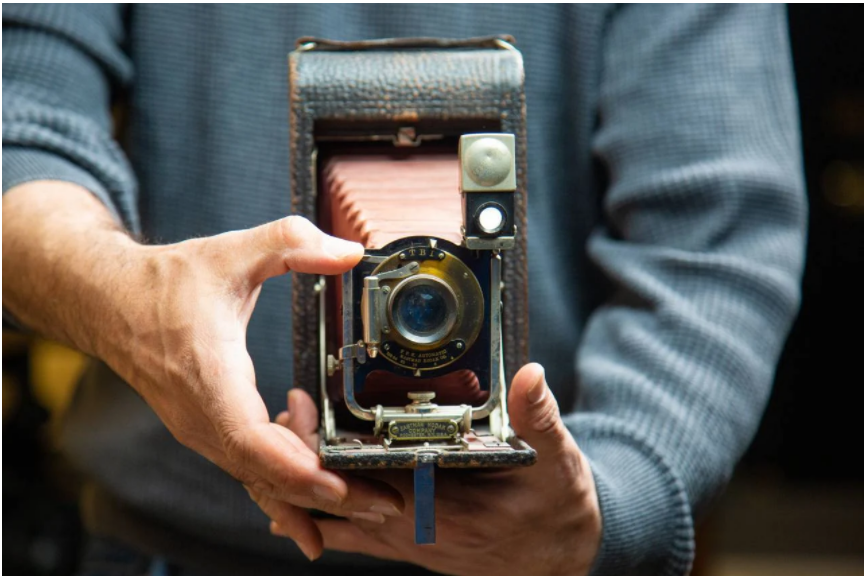 While the main part of his collection is made up of cameras — accordions, Box, RolleiFlex, Polaroid, SLR, rangefinder, etc. — Halwani has also gathered several other devices.

His collection also includes old cameras and old light meters (used to measure luminosity) and even a lighted advertising sign in the colors of the iconic American manufacturer Kodak, straight from the 1960s — an object he purchased a few years ago from a store in Beirut’s Hamra district that was managed by two people in their 80s.

“Even if, as time goes by, I look for more valuable devices, it is mostly my affinity for the different pieces that I come across that finally dictates my choices,” Halwani said.

“That's why I have a little bit of everything in my collection, some rare and expensive, and others more common and cheap, but that I like because they have something special in them.”

Some of Halwani’s collection of extremely well maintained and preserved items from the past transcend the field of photography.

“Do you remember the pocket watches that were quite common between the 19th and early 20th centuries [before being gradually replaced by wristwatches]?” Halwani asked, fidgeting with the end of the winding stem of one of his items.

“It's a spy camera, an Expo Pocket Watch [sold from 1905 to 1935],” he said mischievously, shifting the small piece of metal protecting the lens.

Comic book lovers would remember seeing such a device in the eighth volume of The Adventures of Tintin, King Ottokar's Sceptre, published in 1939.

This pocket watch is one of the 10 or so spy cameras that Halwani owns. He then hastened to show off another one that looks like a gas lighter. It is a Minimax Lite manufactured by the Japanese company Nikoh and whose lens is located in the middle of the gas tank.

Unlike spy pocket watches, which have disappeared from circulation [with a few models with a bracelet only], the spy lighter seems to have successfully made the transition to the digital age, with many models available online and often sold for a pittance. 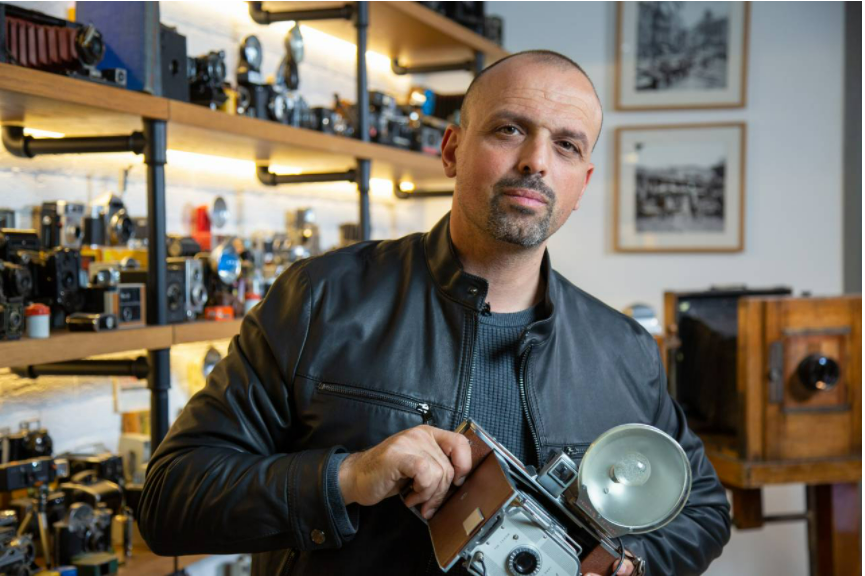 Samer Halwani not only owns and maintains all these cameras, but also "likes to use them and develop photos using old techniques." (Credit: Thomas el-Hage Boutros/OLJ)

More classic but just as amazing are the panoramic cameras, whose first prototype, the Austrian cylindrograph, was created in 1841, only two years after the first daguerreotype.

However, it was not until the late 1910s that Kodak, founded 15 years earlier, launched the first mass-produced camera, the Panoram Cirkut Swing Lens, a bellows device that Halwani just happens to own.

As he explained it, these first devices are rotary, with a chamber set on a pod.

The whole thing was rather fragile and there were frequent failures in cases of use. A few decades later, in 1967, the USSR launched the Zenit Horizon, with a chamber that could be reassembled by means of an integrated knob, similar to the one used to rewind film on disposable cameras.

Each piece in Halwani's collection tells an even more extraordinary story than the last, some of which take the visitor back to concepts they thought were the product of a more recent era.

The selfie, for instance, was not born with the mobile phone, but with the Minolta Disc-7, launched by a Japanese manufacturer in 1983 and equipped with a removable stick and a front mirror allowing the user to frame the shot.

One of the first attempts to merge a camera with another object from the field of multimedia goes back to the 1960s, with the Air King, which was equipped with a radio. 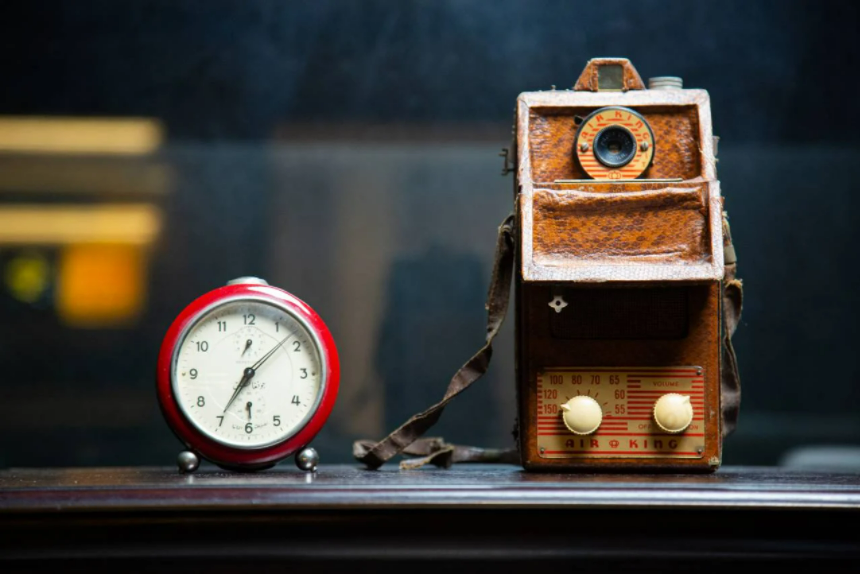 Having a camera with several lenses as is the case with most new smartphones? The concept already existed in the 20th century with stereoscopic photos.

Halwani’s collection includes Kodak Autograph models launched from 1910 to 1925 and supplied with a pencil to sign the photos, art-deco box cameras that were conceived as of the 1930s (with the Beau Brownie series) and were available in several colors, toy cameras, and two precious German Leicas from the 1930s and 1940s. And the list goes on.

To the left of the shelves, there is an imposing wooden bellows studio camera that develops on a glass plate ( brand has not been identified) dating from the beginning of the 20th century.

Mounted on four pods equipped with wheels, it is the largest camera in the collection, bought from Souk al-Ahad, Beirut’s Sunday flea market.

Halwani, however, is not satisfied with only owning and maintaining all these cameras.

“I also like to use them and develop the photos with old techniques, at least when I can do it alone with the equipment I have or with the few professionals who still exist in this country,” he explained.

On a wall next to the one on which his collection is displayed, there is a picture of a shopping street straight out of the last century. In the middle of the picture, there is a man donning a tarboush (a traditional Lebanese red hat) looking to his right.

“This is one of the most beautiful discoveries I have made in building my collection. This picture was taken by the owner of a camera I bought four years ago in Lebanon — a Rolleiflex T from the late 1950s, early 1960s. It is my weak spot,” he said.

“I decided to try to take some pictures with it. I took it home with me. While examining it, I noticed that it contained a film that was already used. I took it to the specialist I usually deal with,” Halwani continued.

“This is not the first time this has happened to me, but until now I have never been able to find a film that is in good enough condition to be developed.”

But in this case, the film was in color, and only the chemicals to bring out the red had held. This is what allowed the photo to appear.

After digital processing, four pictures could be recovered, including that of the man with the tarboush, which represents, according to Halwani, a street in Beirut in 1974.

This is a discovery that he now considers as an incentive to maintain his collection and encourage new amateurs to follow his path.

People tend to forget. Therefore, the camera and its cousin, the video camera, are considered to be among the most emblematic artifacts of the past two centuries — a tale that Samer Halwani knows like the back of his hand, from the introduction of the daguerreotype in 1839 to the glory of analog photography four decades ago.This photography aficionado is a father and a manager of a food...