Where does Ashraf Rifi stand in all this? 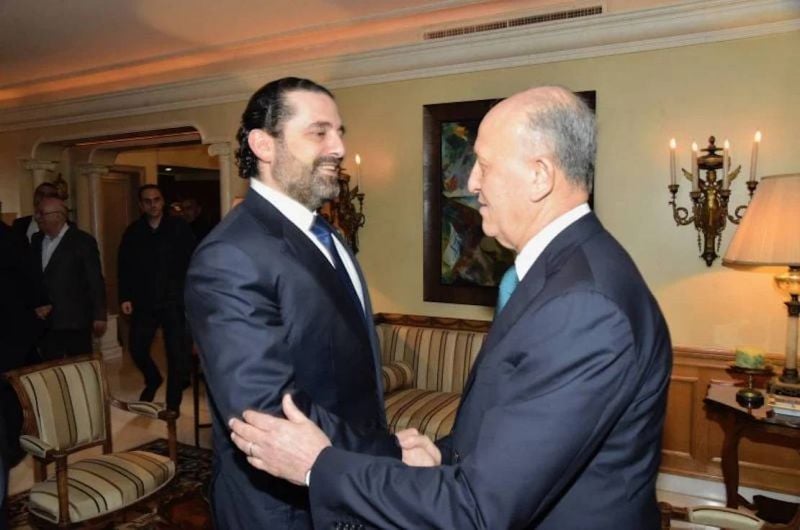 Ashraf Rifi and Saad Hariri at the time of their reconciliation, March 12, 2019. (Dalati and Nohra archive photo)

Former Prime Minister Fouad Siniora does not seem to be the only one eyeing the Sunni electorate after the decision of Future Movement leader Saad Hariri to boycott the legislative elections slated for May 15. Former Justice Minister Ashraf Rifi is also gearing up for battle.

A staunch opponent of Hezbollah, and of Hariri’s choices, Rifi is slowly moving his pawns in Tripoli, his hometown, long perceived as a Future Movement stronghold.

While Siniora is multiplying calls on Sunni voters to cast their ballot despite Hariri’s decision to boycott the elections, Rifi has been concocting his own list in the North Lebanon II constituency, which includes Tripoli (five Sunni seats, one Maronite, one Alawite, and one Greek Orthodox), Meniye (on Sunni seat), and Denniye (two Sunni seats).

“My list will be complete and will include only new figures embodying change,” Rifi told L’Orient-Le Jour.

Reaching out to the “forces of change,” or political figures that emerged from the Oct. 17, 2019, protest movement, means that Rifi has clearly chosen a side, and it is not an alliance with Siniora who is, in turn, forming his own list in Tripoli in view of the battle.

Despite having two different lists, both men agree on the need for Sunni voters to participate in the election, and most importantly on protecting the Sunni street against a breakthrough on the part of Hezbollah and its allies.

“I am in contact with Fouad Siniora, and I appreciate some of his stances,” Rifi said.

According to information obtained by L’Orient-Le Jour, the former minister met a few days ago with a Saudi official in Paris and expressed his willingness to stand for election and lead the battle against Hezbollah.

For his part, Siniora also met last week in the French capital with Saudi officials. However, efforts to have the two men join forces have been unsuccessful so far.

This means that Rifi would therefore run the risk of entering the fray without any significant Sunni support, especially since Prime Minister Najib Mikati has always been one of his traditional opponents.

While he is aware of how tough the battle is, Rifi remains determined to toss his hat in the ring.

“I have no hesitation in taking part in the competition because the country will only be able to get out of the current crisis if it frees itself from the yoke of Hezbollah,” he said.

On Tuesday, Rifi officially presented his candidacy for one of the Sunni seats in Tripoli.

His move comes at a time when many notables of the community have also oiled their political machines in the run-up to the elections, despite Hariri’s and many of his party members’ withdrawal from the political scene.

“We do not follow people. We are an essential part of this country. We must not boycott the vote,” Rifi said, adding that Hariri’s decision to bow out of political “was a good decision because the time of compromises is over.”

The former justice minister said that he has no contact with the Future Movement leader.

“The last time I saw him was in 2019, shortly before the [reconciliation] meeting in Tripoli,” Rifi said, referring to the meeting he held with Hariri on March 12, 2019, under the auspices of Siniora, to achieve reconciliation between the two men, whose relations had deteriorated after the presidential 2016 compromise that saw Michel Aoun ascending to the presidency.

‘Serious contacts’ with the LF

While he is embarking on a battle without a Sunni partner, Rifi could well bet on the support of the Lebanese Forces, also hostile to Hezbollah — an option that the former justice minister could explain by the fact that he has always said he was open to the opponents of the pro-Iranian party.

“I stand for election by extending a hand to all sovereigntists and those who want change, in a bid to free Lebanon from Iranian tutelage,” Rifi said in a tweet on Tuesday.

The LF, whose relations with the Harirists have been at a low point for several months, have gained some popularity among the Sunni community since October’s Tayyouneh shootings in Beirut between Amal Movement and Hezbollah supporters and armed men allegedly belonging to the LF.

While he did not confirm an alliance with the LF, Rifi said that “serious contacts” were made with the Christian party. He also refrained from commenting on information obtained by L’Orient-Le Jour in relation to a recent meeting with LF leader Samir Geagea.

Meanwhile, Wissam Raji, an LF member who is closely following up on the election process, said that he was “not aware” of any such meeting.

“There are ongoing contacts with both Ashraf Rifi and Fouad Siniora, as it is important for us that all sovereigntist forces are united in a single list in Tripoli,” Raji said.

For the moment, Siniora is also refraining from mentioning any electoral alliance with the LF, let alone Rifi.

“I am in contact with Mr. Rifi,” said the former premier, who announced on Tuesday that he was not running for elections, stressing that he is being “thoroughly” involved in the process.

“What matters most to me is that the country is not abandoned,” Siniora told L’Orient-Le Jour, a jab at Hezbollah, accused of wanting to benefit from the Future Movement’s absence to win over Sunni figures in Parliament.

“It is especially Najib Mikati who is in charge of contacts to form a Siniora-sponsored list in Tripoli,” a source following up on the matter said.

For his part, Ali Darwish, a Tripoli MP close to Mikati, said that the premier “will not opt for any move that would raise Hariri’s ire.”

In any case, the names of some candidates who could be on Siniora’s list began to make rounds behind closed doors, including Mustafa Alloush (Sunni), former Future Movement No.2 man who resigned from his post to run for elections; Karim Kabbara (Sunni), son of Mohammad Kabbara, a former Haririst MP; Sami Fatfat (Sunni), current MP for Denniye; and Sleiman Obeid, son of Jean Obeid, a Maronite MP for Tripoli who died in 2021.

Former Prime Minister Fouad Siniora does not seem to be the only one eyeing the Sunni electorate after the decision of Future Movement leader Saad Hariri to boycott the legislative elections slated for May 15. Former Justice Minister Ashraf Rifi is also gearing up for battle. A staunch opponent of Hezbollah, and of Hariri’s choices, Rifi is slowly moving his pawns in Tripoli, his hometown,...