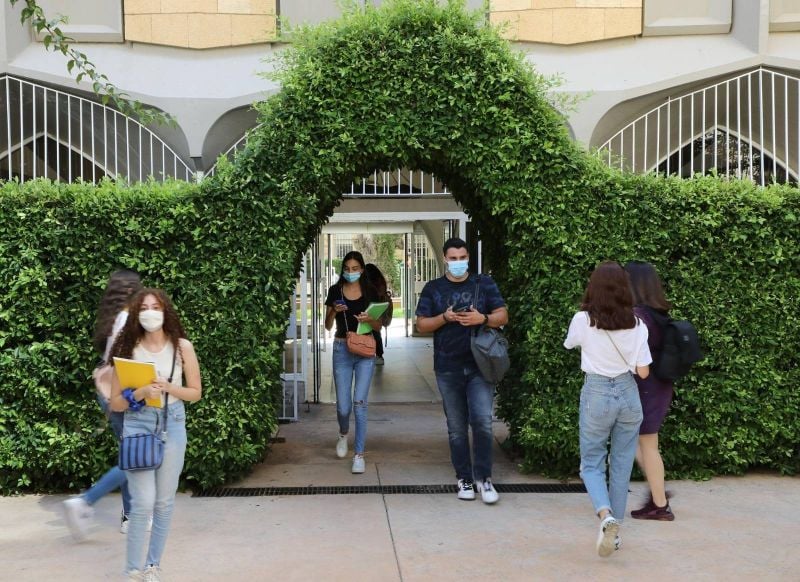 BEIRUT — “It’s no longer the quest for my ‘dream job,’ it’s merely a journey to, simply, a job,” said Sirine Matta, a 19-year old student at the Holy Spirit University of Kaslik.

“I used to be a philosophy student but given the economic crisis, I had to be realistic and look for a major that will help me find a job outside Lebanon, because I want a better future, a more financially secure one,” Matta said. “And as I looked into the global workforce and which majors were needed abroad, I found that majors like engineering and finance could increase my earnings and are always needed.”

Matta has, thus, shifted her major from philosophy to finance.

Graduating into an economic crisis can haunt young people for years, studies have found, affecting their salaries, employment prospects, and even their physical and mental health.

In Lebanon, many current and prospective students like Matta have made choices about their academic track based on the need to adapt to the challenges of this new reality.

As of 2020, about550,000 people were unemployed in Lebanon according to a study by InfoPro, while the World Bank reported last year that 61 percent of formal firms had decreased their permanent workforce by 43 percent on average since October 2019. These realities have pushed concerns surrounding job stability to the forefront of many students’ minds.

While some students have changed their majors with a view to job prospects after graduation, others have had their choices impacted by their current economic circumstances.

Abdo El Hayek was one year into his pre-med years at the Lebanese American University when the economic crisis blocked his plans.

“I always wanted to go into medicine. I worked so hard to get into this field, and although I knew the tuition would be costly, I had applied for financial aid, and luckily got a 35 percent aid [package], and thus I started with my dream journey into becoming a doctor,” Hayek told L’Orient Today.

But amid the economic collapse, his tuition costs began to pile up as the exchange rate used for tuition fees had increased from the official rate of about LL1,500 to the "lollar" rate of LL3,900 to the dollar.

“I was worried that it would increase again overnight. I already can barely afford it, and it might get even worse,” Hayek said. “Should I change? Should I proceed? I was stuck in a big dilemma given that the fees were no longer affordable and I was afraid of a further fees’ increase. I then decided to change majors to something that is close to medicine, and I chose to go into pharmacy.”

Hayek explained that he made the choice as the tuition fees are lower in the school of pharmacy.

According to data collected by L’Orient Today, the schools that witnessed an increase in undergraduates’ enrollment at LAU as a percentage of the total enrollment in the fall semester of 2021 compared to 2019, pre-crisis, were the least expensive among the majors: the school of arts and sciences and the school of nursing

Speaking to L’Orient Today, Aya El Horr El Mir, former director of student services at LAU, and the head of educational services at PACEM, Family Office, which offers investment, asset, and wealth management and educational support to families, explained that the greatest challenge to the current university students lies beyond the struggle to find their interests and to follow them. It is now the struggle to afford an education and maintain mental health in order to graduate and then find a job.

Along with the increasing financial challenges, El Mir noted that the disruptions in the last two academic years caused by the prolonged school closures during the mass protests beginning in October 2019 and then the COVID-19 pandemic set many students back in their academic skills.

That was the case for Yara Fleiha, a student at the American University of Beirut.

“I used to be a student in biology back in 2019, but once the classes turned to remote learning amid the pandemic I questioned my choice of major, especially since I was finding it hard to convert the experiential learning that we once had inside lab and field classes to a flat and remote interface,” Fleiha told L’Orient Today, explaining that due to the shift to remote learning, she has now shifted her major to business, which is “virtually more practical to acquire.”

Fleiha explained that she does not regret her decision as she believes that she will find more opportunities in business in the current market.

Mir said despite the many challenges facing Lebanese students now, there are reasons for hope.

“Although there are many reasons for students to find themselves in the midst of a career dilemma, yet, in order for them to be able to continue their education and maintain what is now considered a luxury, students need to believe that better days are yet to come in order to keep their motivation, and eventually do what they love,” she said. She added that in the coming years, fresh graduates may even find more opportunities in Lebanon, as many of their compatriots have left the country in search of work abroad.

“Although the brain drain in Lebanon is unfortunate, this could mean that the job market, once Lebanon begins to push back on the crisis, there will be a great demand for the workforce,” she said.

BEIRUT — “It’s no longer the quest for my ‘dream job,’ it’s merely a journey to, simply, a job,” said Sirine Matta, a 19-year old student at the Holy Spirit University of Kaslik.“I used to be a philosophy student but given the economic crisis, I had to be realistic and look for a major that will help me find a job outside Lebanon, because I want a better future, a more...