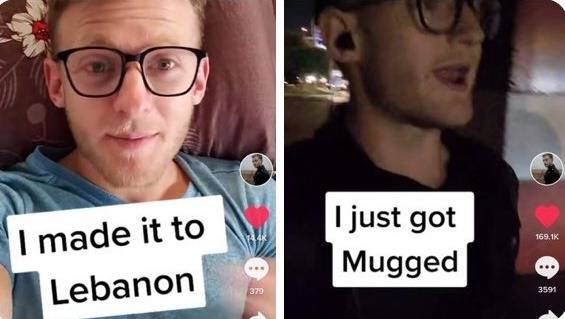 BEIRUT — A week ago, American TikTok influencer Nathaniel Hayes was mugged in Lebanon as he was walking his last steps into Beirut International Airport. In a video he circulated, Hayes said the thief had stolen his electronic devices, including: a laptop, tablet, chargers and his extra phone, along with Hayes’ passport and COVID-19 vaccine card.

“I was literally just about to get on a plane to get out of the country, but apparently I can’t leave anymore,” said Hayes in the video he recorded at the scene of the incident last week. He was later able to get an emergency passport from the US Embassy.

Over the past couple of months, fears have risen over an increase in murder and theft cases in Lebanon. Statistics from International Information, an independent regional research and consultancy firm based in Beirut, confirm that since the beginning of this year, the number of stolen cars increased by 212 percent, theft crimes rose by 266 percent and murders are up by 101 percent in comparison to the first 10 months of 2019 — before the economic crisis became truly apparent.

More than two years after it became clear that Lebanon was in severe financial trouble, the country’s economic crisis continues to deepen. The Lebanese lira is still losing value, reaching a record low last Thursday. In addition, subsidies have been partially or completely lifted on most essential goods, including medication and fuel.

The Economy Ministry released a statement Thursday setting new bread prices and weights. Large bundles are now set at LL8,000, a 2.81 percent price increase in the price per gram since Nov. 18 and a 478.31 percent increase since before the economic meltdown.

Against this backdrop, the Lebanese army reported that in October it arrested 486 people for involvement in various crimes and misdemeanours, including theft, smuggling, possession of weapons and contraband, and driving cars and motorcycles without legal papers.

On the morning in mid-October, Ziad Tabbara was parked on the side of a road in an area close to the Old Airport Road in Beirut, waiting for his Google Maps application to activate before he could continue his journey. A masked man approached him claiming to be a member of the intelligence service “but dressed in civilian clothes,” Tabbara recalled.

“The moment I asked for an identification card, he pointed the gun towards me and asked for money. I complied with him and no harm was caused,” he told L’Orient Today.

Tabbara is not alone in facing such an incident. A number of thefts and robberies have reportedly been perpetrated by men dressed in security forces uniforms. In the beginning of November, Interior Minister Bassam Mawlawi received a delegation from the Beirut Families Union, a group encompassing Sunni families from the capital Beirut, that voiced concerns over increased thefts in the city and the fact that burglars and robbers are impersonating security forces to mislead citizens and facilitate their crimes.

Mohamad, who lives in Ras al-Nabeh, told L’Orient Today that his household was burgled at the end of last month, when a group claiming to be “security forces” asked the building’s janitor to open the gates and lead them to Mohamad’s residence to check his apartment for drugs and weapons, but without presenting a search warranty.

“As the janitor escorted them upstairs, I heard loud knocks on the door and voices urging us to open at around 10 p.m.,” he said. “I looked into the door viewer, and when I saw the uniforms I directly opened the door even though I know that I haven’t done anything illegal.”

Mohamad went on to say that the robbers locked them in a room with no telecommunication devices and placed a member “of their gang with [them] for surveillance.” They suddenly left unannounced, and “when we went out of the room, we saw that all my wife’s jewelry was stolen, along with the house’s most valuable possessions and money from all my family’s drawers and wallets.”

Overall, statistics from International Information show that theft crimes increased by 266 percent since before the economic meltdown, with 1,314 theft crimes recorded year-to-date in October 2019 compared to 4,894 from January to October this year. Thefts also increased by 92 cases between September 2021 and October 2021.

On average, 3.6 cars were stolen every day since November 2019. During the first 10 months of this year, the number of cars stolen reached 1,097 compared to 351 cars in the same period two years ago, according to statistics by International Information taken from the General Directorate of Internal Security Forces. The ISF did not respond to L’Orient Today’s request for statistics.

Last Tuesday, a neighborhood in the Sabtiyeh area in Metn woke up to find five of its residents’ cars had been stolen. One person, who declined to give his name for “security reasons,” said, “I had my car parked in front of the building like I always do, but the next day I couldn’t find it. I sent a complaint to the police and they are doing all they can to get it back to me.”

Adding to their hardships, not all people whose car was stolen are compensated by insurance, even if they have a policy.

According to an insurance broker from Securite, only full-risk packages can cover car thefts. He noted that car owners who do not have this package cannot receive compensation if their car is stolen.

Facebook posts on people looking for their “missing cars” have also been circulating. Jamil Itani from Beirut wrote on his page on Nov. 17 that “he went through an incident, where his car, wallet and official papers were robbed.” He called on “whoever sees” his car to contact the closest police station.

A gang that kidnapped and robbed van drivers at gunpoint was seized by the Internal Security Forces last Wednesday. The ISF also reported arresting a gang that stole dozens of motorcycles in Nabatieh, south of Lebanon.

Killings: up by 101 percent

Last January, Issam Khamis, a father of three, was on his motorcycle heading to the supermarket, when a thief on another motorcycle attempted to steal the bag he carried on his side. The father fell, hitting his head on the cement, and later passed away at a hospital.

In May, Gaith al-Masri died of a gunshot wound at his family’s gas station in Akkar following a dispute over diesel, amid shortages of fuel in the country.

The number of homicides decreased slightly by 1.1 percent during the first 10 months of 2021 compared to the same period in 2020. But it increased by 90 deaths — or 101 percent — in comparison to 2019, according to International Information.

As murder and theft cases increase, countries such as the US and the UK have advised their citizens against traveling to Lebanon.

“Reconsider travel to Lebanon due to crime, terrorism, armed conflict, civil unrest, kidnapping and Embassy Beirut’s limited capacity to provide support to US. citizens Some areas have increased risk,” the US Department of State — Bureau of Consular Affairs wrote.

BEIRUT — A week ago, American TikTok influencer Nathaniel Hayes was mugged in Lebanon as he was walking his last steps into Beirut International Airport. In a video he circulated, Hayes said the thief had stolen his electronic devices, including: a laptop, tablet, chargers and his extra phone, along with Hayes’ passport and COVID-19 vaccine card.“I was literally just about to get on a...

Depositor, whose wife has cancer, holds up bank in Chehim

Oueidat to Osman: Police must get instructions from the prosecution

Resilience and a sense of pride drive Lebanese in the US

Amid economic crisis, long-forgotten artistries come back to life in Lebanon

Torrents of water flood roads in Kesrouan and Jbeil

Suzanne BAAKLINI with the web department