Hezbollah distributes aid to the relatives of the Akkar explosion, much to the dismay of the Future Movement

While the Shiite party denies any ulterior political motives for providing aid in Akkar, some accuse it of taking advantage of the desperation of the victims’ families 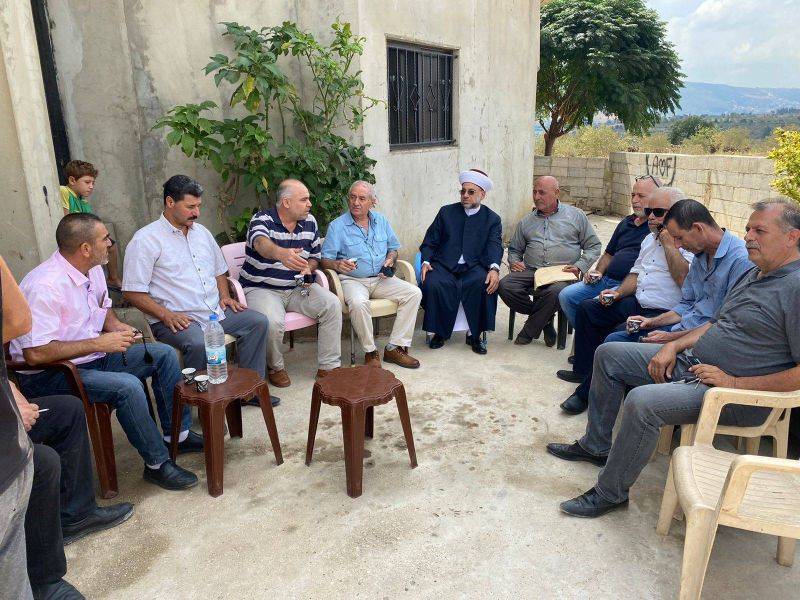 A tour of local elected municipal members and Sheikh Maher Abdel Razzak to distribute aids to families of the bereaved in the wake of the explosion in Akkar last month. (Credit: Michel Hallak/L’Orient-Le Jour)

On Aug. 15, a fuel tanker exploded in Tleil, in Akkar, killing more than 30 people and injuring 80 others. But while the case is almost closed, with those immediately responsible for the tragedy arrested, another controversy came to shake this forsaken area of northern Lebanon.

This initiative is unprecedented in many ways. Akkar, whose population is largely Sunni with a Christian minority, is known to be the stronghold of the Future Movement and the party’s Sunni supporters.

Other political parties are also present in the area, including the Free Patriotic Movement and the Lebanese Forces, not to mention the Syrian Social Nationalist Party and the Baath Party.

Partisans and supporters of the so-called axis of resistance exist there, but as parliamentary elections in recent decades, including the one in 2018, have shown, the Future Movement has had the upper hand in the area.

Therefore, it was no surprise that this initiative on the part of the Shiite party was seen as meddling in Akkar’s affairs.

“This is absolutely not the case,” Sheikh Maher Abdel Razzak, who organized the family aid distribution tour, told L’Orient-Le Jour.

The Sunni sheikh, known to be close to the axis of resistance, is also the president of the Reform and Unity Movement.

“Hezbollah wanted to avoid at all costs any political interpretation of this move, and even prevented [the party-affiliated channel] Al-Manar ... from covering our tour. We insisted on making this initiative open to the public to show gratitude,” Abdel Razzak said.

Commenting on how this initiative came to be, the sheikh said it began with the “Hezbollah secretary-general’s message of condolence to the relatives of the victims in one of his speeches, in which he promised to offer immediate help to them.”

Abdel Razzak added, “We followed up on these promises and got in touch with Hezbollah. Elected officials in the area met with the party’s representative in Jbeil. From the names on the list drawn up by the area’s elected municipal members, the Hezbollah secretary-general did not wish to exclude anyone.

“We’ve already distributed aid to the Lebanese families. The families of the Syrian victims are next,” he said.

Responding to accusations that the party is meddling in the affairs of an area that is traditionally affiliated with other parties, the sheik said, “Almost a month has passed since the tragedy, and the parties who are said to be influential in the area have not only turned a blind eye to the people’s distress but did not even send delegations to offer their condolences to the families of the deceased.

“Neither former Prime Minister Saad Hariri nor Grand Mufti Abdel-Latif Derian made an appearance in Akkar. Today, those criticizing Hezbollah fear that the party’s initiative has shed light on the negligence of the area’s officials,” Abdel Razzak added.

‘A deceitful attempt at interference’

For Mustafa Alloush, a former MP and the Future Movement’s vice president, Hezbollah’s initiative is “a deceitful attempt to interfere in an area that is not affiliated with it by taking advantage of the people’s pain and misery”.

“The people need to be aware of the full dimension of the issue. After all, Hezbollah is one the main causes of the economic degradation and fuel shortages that were the main reason behind the terrible explosion. The party wants to show another face in the Sunni area, that of a charitable and helpful political party,” he told L’Orient-Le Jour.

Alloush added that Hezbollah’s claims about the Future Movement’s inaction in the area are unfounded.

“The Future Movement has spent hundreds of millions of dollars in Akkar for decades. Also, it was Saad Hariri who was working on sending the wounded to hospitals in several countries of the region. Doesn’t that count?” he said.

“Those who want to forget that and be impressed by a few pennies that barely make up the monthly salary in dollars of a Hezbollah fighter have to own up to their choice,” Alloush added.

What is the long-term impact of the Shiite party’s move?

In fact, any political dimension of this move ought to be gauged by the reaction of those mainly concerned: the victims’ relatives, who have accepted the Shiite party’s offer, even though they have traditionally been on the opposite end of the political spectrum from Hezbollah.

Abboud Merheb, the president of the central Dreib municipal union, which comprises several towns in the area, including Tleil and several other villages that victims hailed from, told L’Orient-Le Jour that he was surprised by the populations’ warm welcome of the initiative.

“They could have refused the money, but they accepted it wholeheartedly. They even insisted on thanking Hassan Nasrallah and asking him to ensure that the investigation into the explosion would reveal the whole truth,” he added.

Merheb, an elected municipal member, said this initiative, although coming from a political party, was “unconditional,” stressing that the funds’ distribution was entrusted to the area’s residents and “no Hezbollah delegation was sent there.”

Does this suggest that Akkar’s inhabitants are moving away from the Future Movement and other traditional political parties?

“It is clear that this is Hezbollah’s intention and that some could be tempted by money,” Alloush said.

“It is evident that Hezbollah is taking advantage of the Future Movement’s current situation and weakness in a bid to interfere in the affairs of an area that is not affiliated with it,” he added.

Party politics aside, should political parties distribute money to the needy, or is it the role of the state to ensure development?

“The Future Movement has funded many institutions in Akkar in the past. In hindsight, I find this to be wrong. The state should have taken care of this,” Alloush said.

But where is the state in all this?

Both Abdel Razzak and Merheb said that their areas in Akkar have been without water or electricity for two weeks.

“We were expecting fuel tankers, but they were hijacked by smugglers right under the police’s nose. We are no longer feeling safe,” Merheb said.

What kind of change can be expected in Akkar, a forsaken area marred by misery and insecurity?

Hezbollah’s initiative has come to blur an already foggy landscape plagued by uncertainties.

On Aug. 15, a fuel tanker exploded in Tleil, in Akkar, killing more than 30 people and injuring 80 others. But while the case is almost closed, with those immediately responsible for the tragedy arrested, another controversy came to shake this forsaken area of northern Lebanon.On Sept. 7, Hezbollah paid out LL30 million to each of the families of the victims who died in the explosion, and LL15...