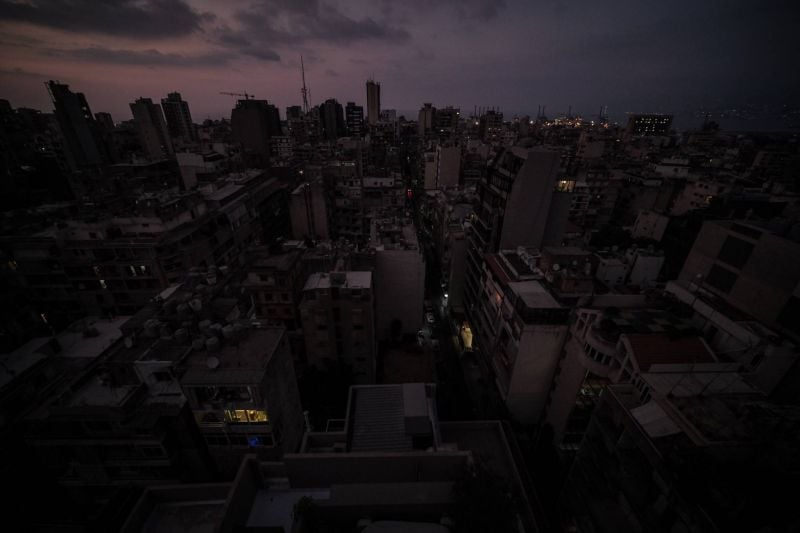 Electricity blackouts stemming from fuel shortages leave much in Lebanon in darkness for hours throughout the day. (Credit: João Sousa/L’Orient Today)

BEIRUT – Lebanon’s caretaker energy minister is set to convene with his Egyptian, Syrian and Jordanian counterparts on Wednesday morning to discuss a work plan and timeline for transporting natural gas to Lebanon to help alleviate countrywide fuel shortages that have led to crippling electricity cuts.

According to a meeting agenda released by Lebanon’s Energy Ministry, the delegates will meet in Jordan to discuss whether the infrastructure that would carry the gas to Lebanon is in proper shape to transport the gas, as well as other logistic, technical and financial requirements of the project.

“This is still in the first stages of the discussion and the first meeting. ... There will be more meetings moving forward to discuss all of the details,” an Energy Ministry spokesperson told L’Orient Today.

The proposal is part of a US-coordinated effort with Egypt and Jordan to help ease Lebanon’s electricity crisis by delivering natural gas via the Arab Gas Pipeline, which runs from the Egyptian Sinai Peninsula to Jordan, Syria and Lebanon.

The US initiative — a two-part plan that may also involve helping Lebanon draw power from Jordan’s electrical grid — was announced publicly shortly after Hezbollah Secretary-General Hassan Nasrallah said Iranian-flagged fuel tankers would be making their way to Lebanon to help ease fuel shortages.

Under the US plan, the gas would have to pass through Syria to reach Lebanon, which could then be burned by Lebanon’s power plants to generate power domestically.

However, experts say the proposal to transport the Egyptian gas has several logistical issues that need to be addressed before the imports can reach the crisis-hit country.

“What condition is the infrastructure in? Who will pay and do repairs if there is damage? What is the timeline? What about sanctions? How much gas is Egypt able to send? All this needs to be discussed still,” says Marc Ayoub, an energy policy researcher at the American University of Beirut’s Issam Fares Institute.

“What we know is that gas is not going to start flowing tomorrow,” Ayoub told L’Orient Today.

Among the hurdles are also existing US sanctions on Syria under the Caesar Act, which makes all financial transactions with Syrian institutions illegal under US law. Violating such sanctions could expose Lebanon, Jordan and Egypt to the prospect of further US sanctions.

Ayoub said the US’s support for the plan would unofficially indicate that the bottleneck of sanctions is no longer in place in this case.

“The US has indicated it would be willing to examine the possibility of delivering waivers to facilitate dealing with Syria, but we need to see if this is indeed going to happen,” adds Mona Sukkarieh, a political risk consultant covering Lebanon’s oil and gas sector.

A delegation of high-level Lebanese officials made a rare visit to Syria on Saturday in a bid to push ahead with the US-backed plan.

The secretary-general of the Syrian-Lebanese Higher Council, Nasri Khoury, said Syria was prepared to help Lebanon with “the passage of Egyptian gas and Jordanian electricity through Syrian territory.”

However, Sukkarieh said, “Syria’s willingness to cooperate in deeds not just in words” remains to be seen.

Also unknown is the current state of the pipeline, particularly in Syria, both Ayoub and Sukkarieh pointed out. An anonymous government source told the Lebanese news website The Daily Star that the pipeline “was not damaged by the war and can be activated once an agreement is reached.”

But according to Ayoub, “What we know is that the Arab Gas Pipeline has been damaged at several points in Syria, but how much damage and how long it will take to repair still needs assessment.”

“We can’t be sure in what condition the Syrian part of the infrastructure is in at the moment, before a proper assessment is made,” Sukkarieh affirmed.

Funding for the gas, its transportation and any necessary repairs to the infrastructure has also yet to be confirmed, Ayoub pointed out.

“If Lebanon is currently unable to pay for fuel, how will it pay for all the gas and repairs?” Ayoub said.

US Ambassador to Lebanon Dorothy Shea previously indicated that “the American side is making a great effort to accomplish these procedures, and negotiations are underway with the World Bank to secure financing the price of Egyptian gas.”

A World Bank representative could not be reached for comment on its potential involvement in the initiative.

“All these need to be solved. … Now the political green light from the US is there, but there’s still a lot that needs to be discussed,” Ayoub said.

BEIRUT – Lebanon’s caretaker energy minister is set to convene with his Egyptian, Syrian and Jordanian counterparts on Wednesday morning to discuss a work plan and timeline for transporting natural gas to Lebanon to help alleviate countrywide fuel shortages that have led to crippling electricity cuts.According to a meeting agenda released by Lebanon’s Energy Ministry, the delegates will...