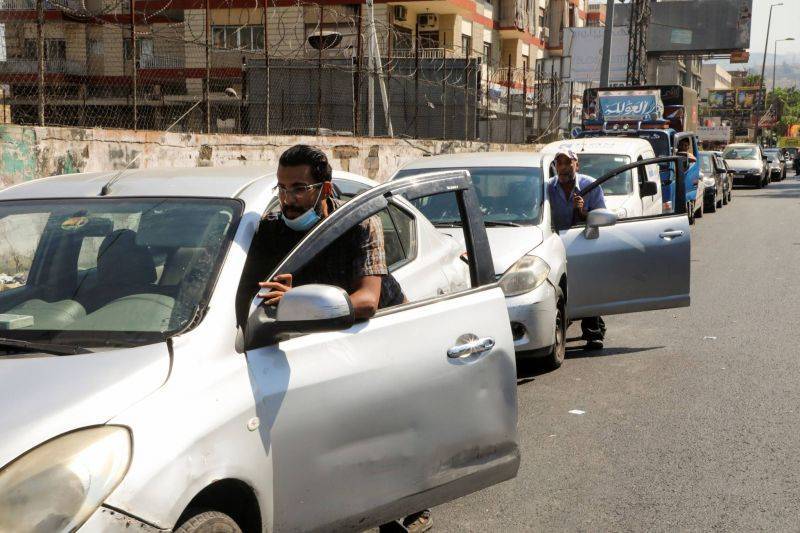 Motorists, running out of fuel, push their cars to a gas station on Aug.17 in Dora, north of Beirut. (Credit: Mohammad Azakir/Reuters)

Lebanon’s collapsing economy is bringing misery now apparent in everyday life. To comprehend its scale, it is necessary to look at macroeconomic data. Recent data released by the World Bank and Lebanon’s central bank provide estimates of the national and external accounts for 2020. These accounts make apparent two specifics of the crisis: a collapse in production and an explosion in capital flight. These phenomena are related, and unless reversed, misery can only rise.

The proximate cause of Lebanon’s disaster is by now clear: a country overspending on credit, without a commensurate rise in production, followed by a sudden stop of financial inflows when trust in a soft landing evaporated. External inflows were $13 billion in 2018, allowing for a high, but unsustainable, level of aggregate spending. By the end of 2020, less than $4 billion trickled in.

The challenge faced by countries subjected to such an economic shock is that initially, domestic production falls as well. With consumer demand down, firms have to shift their production towards exports, and this takes time, allowing for destruction to occur prior to creation.

The first specific of Lebanon’s crisis is that production collapsed. By the end of 2021, GDP is expected to decrease by 40 percent relative to its 2018 level, making the shock much more severe. As a result, expenditures are also expected to collapse. According to World Bank data, in 2020 national expenditures were a third lower than in 2018, with investment down by 64 percent and government spending down by 48 percent. Private consumption fell by 22 percent. These trends will worsen in 2021, especially for consumption, as subsidies financed by reserves, which accounted for half of 2020’s imports, are being eliminated.

The reason for the production collapse is the huge collateral damage caused by misguided policies. Three main mechanisms initiate a rebound: a devaluation of the exchange rate, which makes exports more attractive; an effective credit market, that allows firms to adjust their production structure; and countercyclical monetary and fiscal policies, supported by foreign funding, that ease the pain and re-establish macro stability.

Despite a huge devaluation, the almost complete neutralization of the banking, fiscal and monetary institutions by disastrous policies have ended up deepening the crisis. In the absence of credit, power and price stability, it will be impossible for output to recover. Too many firms are going bankrupt, including those that should lead a recovery. Instead of rising, exports of goods and services were actually halved in 2020.

There is also, unfortunately, more pain to come. After two years of crisis, the rebuilding of the economy has not even begun. The production collapse has occurred even before the removal of energy subsidies, before fiscal and monetary policies have started to adjust, and before banks have been cleaned up. All these policies are necessary for a rebound, but initially, they will hurt firms even more as energy prices and taxes rise, liquidity becomes scarcer, and losses in bank deposits get confirmed.

The expectation that policies will not improve aggravates the crisis, creating a vicious circle. The exodus of youth and professionals is bleeding the country’s human capital. But equally, capital is also leaving, instead of being invested in a new growth path. The accelerated expansion of money supply is breeding hyperinflation. This, and the loss of access to bank savings, is pushing the middle class to accumulate scarce dollars. Meanwhile, the influential rich with political connections and access to Banque du Liban reserves have been sending their deposits abroad to avoid future haircuts.

The external accounts recently published by BDL reveal the enormity of capital flight, the second specific of the crisis. Paradoxically, more dollars were pumped into the economy by BDL in 2020 than flowed in voluntarily before the crisis. Of the $14.2 billion of official reserves it spent (during the first three-quarters of 2020), more than $10 billion are now either in banks abroad or hidden under mattresses. This flight of dollars is making imports evermore expensive: during 2020, inflation was about 80 percent, but the Lebanese lira fell from LL1,500 to LL8,000 to the dollar, implying a three-fold real devaluation. As a result, the capital goods necessary for investment have become unaffordable, and consumption will shrink further in 2021.

The collapse in production amidst capital and skills flight illuminate the real causes of the crisis: a dead rentier economic model that is unable to transition to a productive one, and deeper down, a failed political system that is unable to advance the public good.

It will not be possible for limited reforms to initiate a recovery. Eliminating subsidies will save on remaining BDL reserves, but a social safety net cannot be funded for long unless taxes are increased or foreign funding becomes available. However, both are predicated on comprehensive reforms. Partial fixes, as we have witnessed so far, only signal that the reforms needed to stabilize and increase production continue to be avoided, that capital and people will continue to rush to the exits, deepening the crisis even more.

Lebanon’s collapsing economy is bringing misery now apparent in everyday life. To comprehend its scale, it is necessary to look at macroeconomic data. Recent data released by the World Bank and Lebanon’s central bank provide estimates of the national and external accounts for 2020. These accounts make apparent two specifics of the crisis: a collapse in production and an explosion in capital...