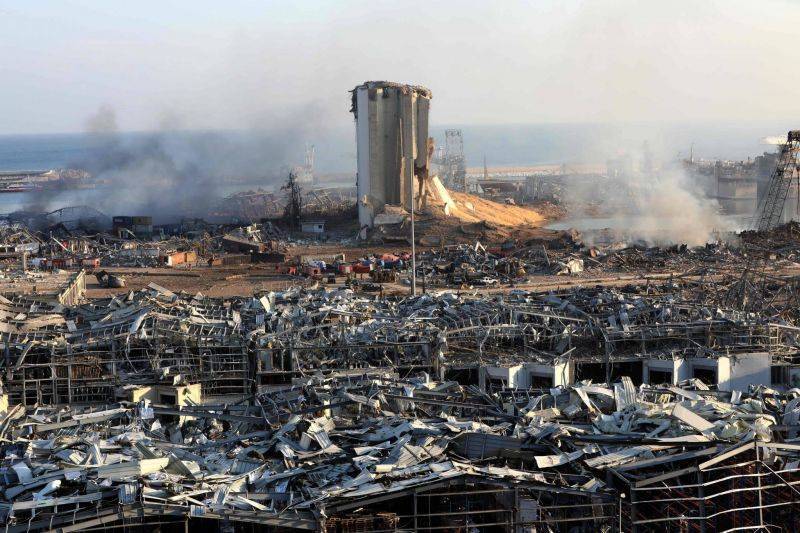 Smoke rises from the Beirut port in the aftermath of the Aug. 4 explosion. (Credit: Anwar Amro/AFP)

Several political and judicial obstacles continue to stand in the way of lead investigator Tarek Bitar in his probe into the devastating Beirut port explosion, the first anniversary of which is Wednesday.

After having met with a rejection from Fehmi, who at the beginning of July denied Bitar’s request to question Ibrahim, it appears that it is now the turn of Court of Cassation Advocate-General Ghassan Khoury to also reject Bitar’s request to review the matter.

In a decision dated July 19 and made public last weekend, Khoury justified his refusal by stressing that an investigative judge at the Court of Justice is not entitled to resort to the prosecutor’s office at the Court of Cassation in case of dispute with an administrative authority in question.

Khoury based his argument on Article 13 of the Code of Criminal Procedure, which stipulates that “the public prosecutor at the Court of Cassation shall [only] be empowered, where a dispute arises between the authority in question and the Appeal Court prosecutor’s office, the financial prosecutor’s office or the government commissioner at the Military Court,.”

“The law does not mention the investigative judges who can appeal the decision of a top official to refuse the interrogation of a public servant ,” says a judge close to the Court of Cassation.

Paul Morcos, founder and manager of JUSTICIA, a Lebanese law firm, tells L’Orient-Le Jour that the legal text “restrictively” cites the judges that are empowered to request that the Court of Cassation prosecutor review the decision of a top authority.

“The law does not mention the investigative judge in charge of a case,” he says, adding, “in order not to infringe on the rights of litigants, one cannot interpret a penal text extensively.”

Morcos stresses the need “for an amendment to the law to make it compatible with such a situation.”

While Said Malek, a constitution expert, also recognizes that the law does not provide for the investigative judge’s right to appeal a top official’s decision, he laments the fact that “these are mere pretexts to maintain diplomatic immunity in the face of the Aug. 4 explosion.”

“So, who would be the party that the investigative judge can turn to in order to annul the minister’s decision in such a case?” Malek asks, noting that Khoury “is keeping the problem without trying to solve it.”

“The matter will end up being shelved,” Malek says.

Khoury mentioned another reason to justify his refusal to rule on Bitar’s request: the Court of Cassation prosecutor’s office is a party to the trial, and therefore it cannot play the role of arbitrator between the lead investigator and the caretaker minister.

The aforementioned judicial source stresses that it is up to the prosecution, and not Bitar, to initiate proceedings directly against an official if he turns out to be a suspect.

According to the same source, if, during the probe, the investigative judge suspected a person, he could summon them to “gather information” and not to prosecute them.

In his decision, the prosecutor asked Bitar to expand the investigation based on the documents the latter had communicated to him, through witness confrontation between Ibrahim and two other witnesses, Mounah Sawaya and Mohammad Moukalled, both officers.

If there are any indications of culpability, then it is up to Khoury to prosecute Ibrahim before Bitar, according to the same source.

For Nizar Saghieh, the head of Legal Agenda, the Court of Cassation prosecutor’s decision is in any case a “non-existent act.”

Why? According to Saghieh, Khoury replaced the previous prosecutor at the Court of Cassation, Ghassan Oueidat, who had recused himself because of kinship with MP Ghazi Zeaiter, who is one of the MPs and former ministers implicated by Bitar.

“Oueidat was the one to appoint his replacement, but it should have been the cabinet that did so,” Saghieh explains.

“In any case, it is up to Oueidat to decide on the interrogation request, because he is the qualified administrative authority to do so, apart from Khoury’s judicial authority,” he explains, stressing that “one cannot waive or delegate a responsibility decreed by law.”

According to Saghieh, given that Oueidat hadn’t responded to Bitar’s request of interrogation within the time limit, i.e., two weeks, his silence means he approved the request automatically.

What is happening gives the impression that there is a desire to systematically sabotage the investigation.

In another similar process that appears aimed at torpedoing the results of the investigation, a few days ago, Parliament set in motion a mechanism allowing parallel proceedings and questioning of three MPs and former ministers, Zeaiter, Ali Hassan Khalil and Nouhad Machnouk.

A petition was signed in Parliament to claim the jurisdiction of the Supreme Court designed to try presidents and ministers, which, to date, has not convened.

This is not to mention the letter sent by caretaker Prime Minister Hassan Diab to Bitar in which he informed the judge that he could not allow the interrogation of the director-general of State Security, Tony Saliba.

Several political and judicial obstacles continue to stand in the way of lead investigator Tarek Bitar in his probe into the devastating Beirut port explosion, the first anniversary of which is Wednesday.After having met with a rejection from Fehmi, who at the beginning of July denied Bitar’s request to question Ibrahim, it appears that it is now the turn of Court of Cassation Advocate-General...