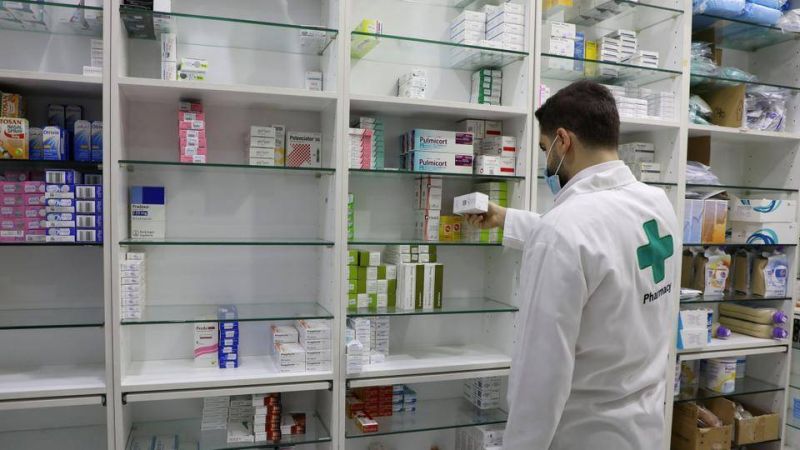 BEIRUT — Almost two weeks have passed since the Health Ministry issued a decision ending subsidies on many imported medicines in an apparent effort to stabilize the supply of drugs available in the Lebanese market — but pharmacists say their shelves are emptier than ever.

Speaking with L’Orient Today, nine pharmacy owners from Sur, the Greater Beirut area and Jbeil said that while they had barely been getting imported medicines from distributors prior to the ministry’s decision, they are now receiving an even more negligible amount, or none at all.

“We have not received any medicines from distributors since the ministry’s decision. At least before we were getting medicines — even if only at a trickle,” said a pharmacy owner in the Sur area, who asked not to be named.

In Hazmieh, just outside Beirut, the owner of Allcare pharmacy described the situation in stark terms: “Our shelves are empty, and we have not received anything since the decision was made. Our situation is catastrophic.”

On July 16, the Health Ministry released a long-demanded list of imported over-the-counter medications that it would no longer subsidize at the official rate of LL1,507.5 to the US dollar, as Lebanon’s economic crisis continues to bite.

Earlier that day, caretaker Health Minister Hamad Hassan had announced that subsidies would remain in place on medicines for chronic diseases and neurological disorders, as well as on infant formula and vaccines.

Alongside the list — which included more than 1,500 drug products — it released what would prove a confusing decision outlining the rate at which these medications should now be bought and sold.

The ministry’s decision followed months of struggles by pharmacists to keep their shelves full and meet their customers’ needs. With stocks dwindling and the national currency’s value plummeting on the parallel market, pharmacists, importers and even the Health Ministry firmly pointed their fingers at the central bank as the root cause of drug shortages.

All three said Banque du Liban’s tardiness in processing subsidy payments meant that insufficient drugs stocks were reaching Lebanon, and those that had been imported were being held in warehouses until importers could be assured they would be paid for them.

BDL’s attempts to reassure importers that payments were being processed failed to earn their confidence, as letters of credit to suppliers reportedly repeatedly failed to materialize.

But the ministry’s list of newly unsubsidized medications and its accompanying decision on the rates at which importers should sell them to pharmacies brought with it even more confusion.

The Health Ministry decision states that importers must sell the drugs on its new list at a rate of LL12,000 to the dollar, justifying this decision on the grounds that importers would have bought the medicines they will now sell to pharmacists during the first five months of 2021. The lira was trading below LL13,000 to the dollar until the end of May, and according to the ministry at least, neither importers nor pharmacists would bear losses if they “release their hoarded medicines.”

A source from the Health Ministry told L’Orient Today that the decision was meant to “solve the issue [of shortages] with this batch [of medicines bought from January to May] as a temporary solution so that we don’t have to fully lift subsidies,” the source said.

The source said the ministry had been given a limited amount of dollars to address the subsidy issue and that this proposal was the best it could come up with.

“What can you do when BDL gives you $50 million and tells you to come up with a subsidy plan?” the source asked. While there are no fully disaggregated figures for subsidy costs, in 2020 BDL paid an estimated $1.105 billion to subsidize medication and medical supplies, according to figures released by the Economy Ministry in December.

“The least one can say about our choice is that it is bitter, but this is the situation of the country that we have to deal with,” the source said, adding that the ministry is open to adjusting the July 16 decision if a better plan is presented that would end the shortage issue while partially subsidizing essential medications.

However, the source also highlighted that because the current conditions are apparently not acceptable to importers, one of the scenarios being discussed is removing the requirement that distributors sell their stocks to pharmacies at the LL12,000 rate and instead allow them to sell them at the parallel market rate. The source said this would resolve the shortage issue, suggesting that importers would then sell their stocks to pharmacies without fears of incurring any revenue losses.

The source warned, however, that even if over-the-counter medicines return to the market unsubsidized, subsidized medicines would remain in short supply as the previous payment issues between BDL and importers would likely persist.

“If you’re going to find a solution for the drug prices, you have to solve the subsidy [payment] issue between BDL and importers,” the source said.

MP Fadi Alame, a member of Parliament’s Health Committee, echoed the view that importers’ buy-in to any solution is essential, telling L’Orient Today that no plan can be successfully implemented unless importers agree to its terms.

“They are the ones who decide if the terms are suitable for them to pay for imports or not, so such a decision would not come into place without their approval,” Alame said.

The lira’s significant strengthening against the dollar on Monday originally boded well for finding an answer to the problem. With the lira trading as strongly as LL16,500 to the dollar on the parallel market on Monday, the Health Ministry source said that doors may open for a solution to the shortage of over-the-counter medicines.

“I am very optimistic about the situation because the lira rate is expected to drop to LL12,000 or even less, and then the importers can just buy medicines on the market rate and and sell them according to our decision, which is at [the] LL12,000 [rate],” the source said. He added: “Even if the rate was slightly above this rate, I don’t think it is going to be an issue for importers because they can still make a profit this way.”

But by Wednesday afternoon, the source’s hopes of the lira continuing to appreciate appeared misguided as it again weakened against the dollar, trading at just more than LL18,000 on the parallel market.

Meanwhile, the head of the pharmaceutical importers syndicate, Karim Gebara, told L’Orient Today he clung to hope that BDL would walk back its decision and subsidize over the counter medicines at the LL12,000 rate. However, he too warned that this would not resolve the whole issue.

“What matters more is the drugs for chronic conditions, cancer patients and others, would not be subsidized at the LL12,000, and [will remain] completely out of stock,” he contended.

In spite of the problem between BDL and importers, the pharmacy owner in Sur thinks there are measures the government can take to ease drug shortages.

“The government should create a plan to support local manufacturing facilities for medicines that we have the resources to produce. It can also ban importing any medicine that has a local generic [version], as well as push toward expanding the number of importers so that [the sector] is not monopolized,” the owner said.

Meanwhile, the head of the pharmacists syndicate, Ghassan al-Amin, has voiced his opposition to ongoing strikes by pharmacies, instead calling for BDL and drug importers to negotiate their way to a solution to the problem.

“Strikes have not achieved anything. ... The problem is between importers and BDL, who are negotiating, and I think they both can’t afford not to come up with a solution soon,” Amin said.

But while importers, the ministry and BDL horse-trade over solutions, staff at pharmacy counters continue to disappoint often frustrated and angry customers.

“We apologize and we tell them that it is the situation and not us [preventing them accessing medications], and sometimes we refer them to a bigger pharmacy that we think might have the medicines they need,” an employee at Drugstore pharmacy in Baabda said.

BEIRUT — Almost two weeks have passed since the Health Ministry issued a decision ending subsidies on many imported medicines in an apparent effort to stabilize the supply of drugs available in the Lebanese market — but pharmacists say their shelves are emptier than ever.Speaking with L’Orient Today, nine pharmacy owners from Sur, the Greater Beirut area and Jbeil said that while they had...