A century of alliance between Saudi Arabia and Lebanon’s Christians

By supporting Lebanon’s sovereignty and independence for decades, Riyadh has often found itself backing the Christian camp. 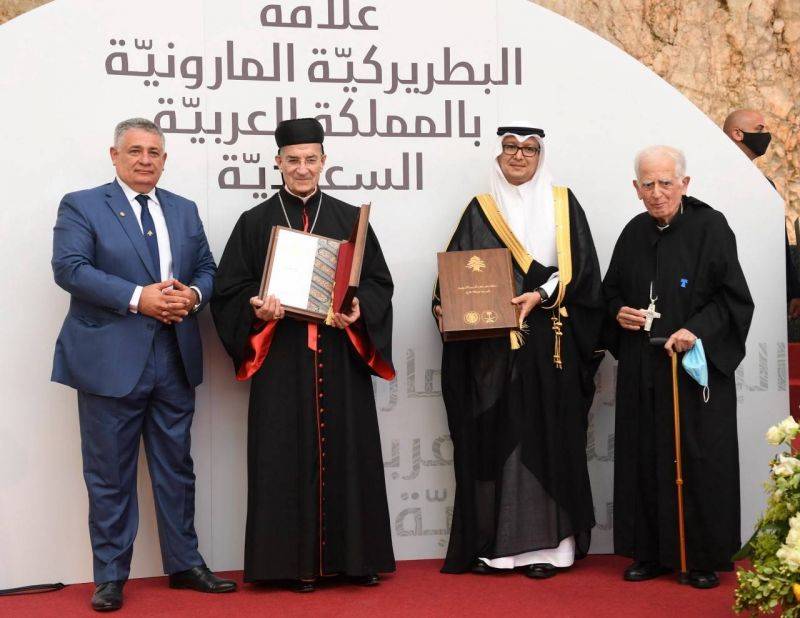 In the war between the axis of resistance and that of Arab countries and Western powers, Bkirki, the seat of the Maronite Church, made its choice — a very long time ago.

On July 8, which marked the centenary of relations between Lebanon’s Maronite Patriarchate and Saudi Arabia, Patriarch Bechara al-Rai was keen on recalling these special ties with the kingdom during a ceremony held in Bkirki.

“Riyadh has never violated Lebanon’s sovereignty,” Rai said in a jab at Iran, among other countries.

“We hope that the local political parties will put Lebanon’s interest first,” said Saudi Ambassador to Lebanon Waleed Bukhari who was also present at Bkirki and who supports the patriarch’s view that Lebanon should stick to the principle of neutrality.

While the kingdom has long been considered the political patron of Lebanon’s Sunnis, Riyadh’s relations have not been limited to this community.

Even before the proclamation of Greater Lebanon, the two peoples were united in their efforts to claim independence from the Sublime Porte.

At the time, the Saud family was in correspondence with Bkirki, backing Lebanon’s independence — something that is recounted in a book by Father Antoine Daou, which was celebrated at the July 8 ceremony.

Official relations between the two began in 1921, which means a few months after the declaration of the state of Greater Lebanon.

The amicable relations between Riyadh and Beirut developed during the following decades, notably thanks to the excellent understanding between the kingdom’s rulers and the two heads of the Lebanese executive, then President Bechara al-Khoury and then Prime Minister Riad al-Solh.

The ties between the two grew a little stronger with the accession to the throne of King Saud in 1953. This was during the presidency of Camille Chamoun. The two men shared common orientations, particularly in relation to confronting the Nasserist revolution in Egypt.

Both parties joined the Baghdad Pact — a pro-US military alliance against Gamal Abdel Nasser’s Egypt. As Cairo moved closer to the Soviet Union after 1956, Beirut and Riyadh gravitated toward the American axis.

Pan-Arabism prevailed throughout the region, and the kingdom found a strong ally in the Lebanese Christian camp. Two years later, however, things got complicated. The 1958 revolution broke out and divided Lebanon, which was at risk of sliding into the pan-Arab tide.

When he came to power, Fouad Chehab refocused Lebanon at the geo-political level. But he still maintained relations with Saudi Arabia, which would continue to develop, notably at the economic and financial levels.

In 1969, the Cairo Agreement was signed, establishing the right of Palestinian armed forces to launch military attacks [against Israel] from Lebanese territory.

Riyadh opposed the deal, believing that it was in direct conflict with Lebanon’s sovereignty.

The kingdom did not seek to forge an alliance with Christians alone, but more generally with Lebanon. But the Christians’ positioning in the regional political spectrum made them strategic allies.

While the Palestinian question divided Lebanon, Saudi Arabia chose to support the Christians’ vision of a sovereign Lebanon, in opposition to the claims of the Palestinians and the Lebanese National Movement led by Kamal Joumblatt.

In 1982, before he was elected president, Bachir Gemayel received an invitation from Saudi Foreign Minister Saud al-Faisal and headed to the kingdom on a private Saudi jet that flew him from Cyprus to the city of Taif for a visit organized by the Americans.

The meeting between Gemayel and Prince Saud took place in the presence of Kuwaiti Minister of State Abdelaziz Hussein and Chedli Klibi, then secretary-general of the Arab League. The Christian leader called for the need to withdraw all non-Lebanese armies and armed organizations from the Lebanon.

Gemayel’s position was backed by Saudi Arabia and Arab countries, which warned against the Israeli danger, and emphasized they were working on restoring Lebanon’s sovereignty across all Lebanese land, while also protecting the Palestinian cause.

The Saudi-sponsored 1989 Taif Agreement, which ended the 1975-90 Civil War in Lebanon, marked the highlight of Saudi influence in the country.

While a part of the Christian camp viewed the deal as a humiliation, depriving Christians of some of their pre-eminent prerogatives and powers, the kingdom took the time to coordinate its action with Bkirki.

“There has never been a will to weaken Christians,” a Saudi official said on condition of anonymity. “It was more about ensuring fair and balanced representation within institutions,” he added.

The Taif Agreement, however, was concluded a few years after the famous 1986 tripartite deal signed under the aegis of Syria between Elie Hobeika, representing Christians, Walid Joumblatt for the Druze and Nabih Berri for the Shiites.

The 1986 agreement was categorically rejected by main Christian leaders, starting with President Amin Gemayel, and No. 2 in the Lebanese Forces, Samir Geagea.

According to the aforementioned Saudi official, the Christian opposition to the tripartite agreement was built in coordination with Saudi Arabia, which at the time rejected the policy of alliance of minorities — an approach practiced by then-Syrian President Hefez al-Assad.

The Bkirki ceremony is a reminder of all these obvious facts.

“The main objective is to reinstate the historical constants of Lebanon,” a Saudi diplomat said.

“Riyadh has no intention of abandoning the country, but Lebanon must live up to this relationship,” the source added.

Meanwhile, a source close to Bkirki said that the recent Bkirki “meeting must be an opportunity for all Lebanese parties to re-establish relations, through the Lebanese state, with Saudi Arabia and all Arabs, which will make it possible to save Lebanon from becoming embroiled in regional conflicts.”

In the war between the axis of resistance and that of Arab countries and Western powers, Bkirki, the seat of the Maronite Church, made its choice — a very long time ago.On July 8, which marked the centenary of relations between Lebanon’s Maronite Patriarchate and Saudi Arabia, Patriarch Bechara al-Rai was keen on recalling these special ties with the kingdom during a ceremony held in Bkirki....