While small-to-medium deposits would be safeguarded, large deposits, especially those exceeding $2 million, would incur a loss of up to 60 percent 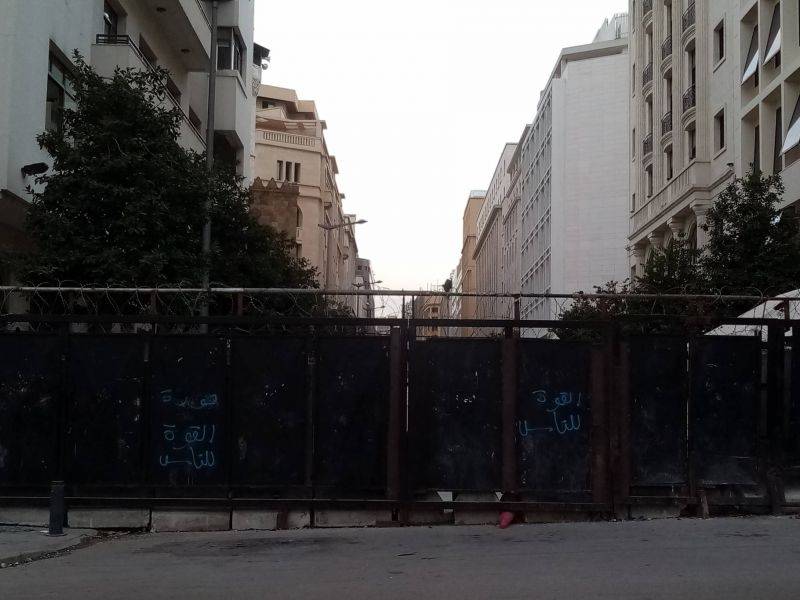 Bank Street in Beirut has been barricaded since popular protests broke out in October 2019. (Credit: MA)

As the situation in Lebanon deteriorates by the day, experts following up on the economic crisis continue to ponder a viable recovery plan for the financial sector. Economist Jean Tawileh outlined his approach in an article for L’Orient-Le Jour, and financial expert Imad Azar gave his input at a conference convened by MP Chamel Roukoz (Ind./Kesrouan) in Harissa.

Adding his voice to the fray last week, Henri Chaoul, a former adviser to the caretaker finance minister, enumerated elements of a draft financial restructuring plan targeting depositors’ losses, while taking into account how they accrue.

Chaoul had been part of the government’s negotiating team with the International Monetary Fund — talks that were requested by Lebanon after it suspended eurobond payments in March 2020. Both he and Alain Bifani, also a negotiator and then the Finance Ministry’s director-general, have since denounced the process as being undermined by the Lebanese side.

According to the authors of the new restructuring proposal, the details of which can be found on Chaoul’s Twitter account, the plan would have to be part of an IMF assistance program. This in turn goes hand in hand with a set of reforms, including a capital control law, the unification of exchange rates, a social safety net to protect Lebanon’s most vulnerable residents and a $96.8 billion debt restructuring plan.

The authors indicate that these processes would also result in the release of more than $11 billion pledged at the CEDRE conference hosted by Paris in 2018.

A team of financial professionals developed the new plan, which focuses on financial losses, and in particular those incurred by commercial banks and Banque du Liban. They believe that BDL’s foreign currency balance has fallen into negative territory by about $65 billion; BDL owes commercial banks some $80 billion, but currently maintains just $15 billion of that debt as banks’ mandatory foreign currency reserves.

Half the losses were due to foreign currency injections designed to preserve the fixed exchange rate of Lebanon’s currency, which has been pegged at a rate of 1,507.5 to the US dollar since 1997. The other half were linked to payments made by the state since 2013 — namely, treasury advances to the state electricity utility, Électricité du Liban, and foreign debt reimbursements.

The so-called Lazard plan, published in 2020, reported gross losses worth LL177 trillion and net losses worth LL121 trillion, using an exchange rate of LL3,500 per dollar, from exposure to BDL alone.

According to Chaoul, it is difficult but not too late to hedge losses and protect small-to-medium depositors, who hold 85–95 percent of foreign currency bank accounts. The plan does not factor in bank accounts in the local currency.

Chaoul recognizes that the status quo will inevitably lead to the further depletion of deposits each year. At the same time, he believes that the proposed strategy is capable of solidifying the banking sector so as to be able to finance the economy.

“This plan enumerates the points to be negotiated by the key stakeholders — namely, BDL, the Association of Banks in Lebanon and the state. It is up to them to find mutual understanding. The government is the one that imposes solutions under normal circumstances. But the problem is that the state has been absent for 20 months. Nevertheless, we are running out of time, and hundreds of millions of dollars are wasted every day while the situation is being allowed to worsen,” Chaoul says.

The protected funds would be able to be withdrawn within limits set by a coherent capital control law, which needs to be drafted and voted on. Hence, they will not be fully withheld, but at the same time, they will have to be withdrawn over time. These sums will retain their value in foreign currency.

The three stakeholders will have to agree on one of the three options. Option A would safeguard 85 percent of foreign currency accounts in full; Option B, 91 percent; and Option C , 95 percent. The plan’s authors are seemingly more inclined toward Option A, saying that, after hedging the losses, the banking sector’s size would be consistent with the size of the economy or GDP, unlike options B and C, whereby the banking sector would make up an outsized share of the economy.

All three options for managing the losses would allow large depositors to recuperate nearly 40 percent of their deposits, including 30 percent in dollars and 10 percent in bank shares and lira.

How losses would be managed

All three scenarios suggest that depositors with an account balance above the agreed-upon thresholds receive the relevant amount ($50,000, $100,000 or $200,000) under the same withdrawal conditions set for small-to-medium depositors, as well as an as-yet-undetermined additional amount in foreign currency. The remaining amount left in the accounts in question will be equally divided into two halves and treated as follows.

The first half would be subject to a “responsible lirafication,” which means that dollars would be converted into lira at the official exchange rate, with the goal of “controlling inflation” by reining in the excess volume of Lebanese currency in circulation. The full “lirified” amounts will be withheld for a period of five years, with an annual withdrawal limit of 20 percent of the total amount.

The second half would be transferred into commercial banks’ capital in exchange for shares in the banks’ ownership for the depositors. If Option A is followed, such a bail-in would result in depositors owning 62 percent of bank shares, with current shareholders’ stakes shrinking to 38 percent. This is an unorthodox method whereby the depositors, rather than the shareholders, would be the first to pay, Chaoul said.

Chaoul said this plan does not favor any party over another and that it would boost the banking management system’s autonomy and diversification. He explained that this is one of the reasons this approach is viable given the current economic policy.

When it comes to deposits exceeding $2 million, a portion would be shifted to perpetual shares issued by BDL but affiliated with banks’ capital trust. Perpetual shares do not have a maturity, or a date on which the issuer of the share must reimburse the total contribution made by its holder plus the annual coupon (the yearly remuneration of the bond).

The distribution of these perpetual shares will allow “the banking sector’s size to shrink.” The plan suggests securing them through assets held by BDL, such as Middle East Airlines or Casino du Liban. Hence, depositors could be paid the pledged amounts through the recovery of stolen funds, the plan suggests.

Finally, the banks would have to convert part of the foreign-currency deposits at BDL to lira at a rate of LL1,500 to the dollar. This will be equal to the total amount of deposits that would have been “lirified” at the official rate.

The banks will also have to cross out part of the amount owed by BDL in foreign currency, which is equivalent to two-thirds of the perpetual shares mentioned above. This two-thirds is justified because banks’ deposits with BDL currently equal about two-thirds of their assets.

The Lazard plan implied an indirect cancellation of BDL’s debt to the banks, which would mean that the state would not pay off its debts to BDL.

This plan would not necessarily be imposed on all banks. It would all depend on the quality of each bank’s portfolio and its exposure to public debt, foreign debt and treasury bonds.

Clarification: This article has been modified to note that figures given for bank losses by the Lazard plan refer to those from exposure to BDL alone.

As the situation in Lebanon deteriorates by the day, experts following up on the economic crisis continue to ponder a viable recovery plan for the financial sector. Economist Jean Tawileh outlined his approach in an article for L’Orient-Le Jour, and financial expert Imad Azar gave his input at a conference convened by MP Chamel Roukoz (Ind./Kesrouan) in Harissa.Adding his voice to the fray...

Lebanese lira strengthens against the dollar in an easily swayed market

With Lebanon edging closer to hyperinflation, a family of five now pays five times the minimum wage for food each month

The Lebanese crisis: A ‘wealth defense’?