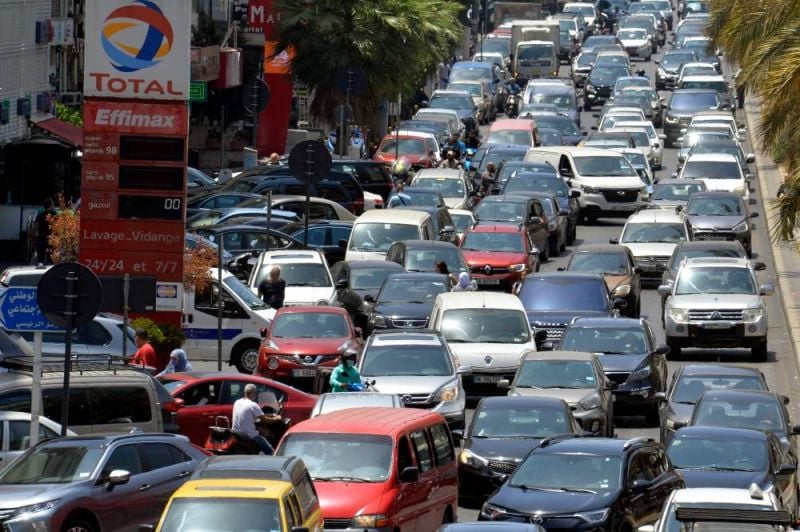 Traffic is clogging streets throughout the country as a fuel shortage is forcing drivers to queue for extended periods to gas up. (Credit: Hussam Shbaro)

BEIRUT — Shortages in Lebanon’s key sectors have wrought chaos in the country as fears loom that the worst economic crisis since the Civil War will force an end to a state subsidy program for essential imports, rendering basic goods unaffordable for many residents.

Bumper-to-bumper traffic choked streets in the capital of Beirut as drivers waited to fill up at gas stations with long queues. Residents could be seen on Thursday leaving petrol stations carrying water jugs full of gasoline, and Lebanon’s General Directorate of Oil issued a statement warning residents against the “improper storage and stockpiling of fuel,” the NNA reported.

Ali Rammal, a flour distributor for Dora Flour Mills in southern Lebanon, said families and bakeries rushed to purchase flour used to bake manakish and pastries from distributors out of fear the subsidy program will soon end, the NNA reported.

Amid the havoc, officials from the country’s oil, gas and medical sectors have ramped up criticism of the central bank, which has been widely blamed for delaying subsidized dollar payments to importers. The importers say the delays are preventing them from distributing their stock to residents or from importing altogether.

The private hospitals’ syndicate said hospitals are suffering from a severe shortage of lab reagents and supplies necessary for conducting laboratory tests, which has forced them “to reduce the number of patients admitted to hospitals.”

The syndicate warned that this would cause prices for these services to increase and blamed stock shortages on the ongoing dispute between medical importers and the central bank over subsidies.

The Hotel-Dieu de France hospital in Beirut had already announced that it would temporarily close its laboratory to outpatients due to an increase in demand as other labs close and supply shortages become more acute.

George Brax, a member of the gas station owners’ syndicate, released a statement condemning Banque to Liban for failing to provide dollars for fuel imports.

“Whoever spends billions of dollars of depositors’ money can afford a few million … to stop the humiliation," Brax said in a statement.

“Everyone knows that the quantities of fuel available inside Lebanon are limited and sufficient only for a short period,” Brax said, adding that “leaving the country without fuel is a criminal and destructive act.”

Since mid-2019, as the national currency began to slip from its official peg of LL1,507.5 to the dollar, the central bank has maintained subsidies on fuel, wheat, medicine and other basic goods. The subsidies help to keep these essential items semi-affordable for residents, even as inflation soars and unemployment is at more than 50 percent. If they are removed, these basic goods could jump to nine times their current price, given that the lira is currently trading at about LL14,000 on the parallel exchange market.

The rush on gas stations — as well as worsening electricity blackouts, shortages of medical supplies and baby formula and wheat stockpiling — are, importers say, the result of BDL’s failure to honor its role in the subsidy scheme and pay out dollars to them in a reasonable timeframe.

This has, the importers say, left them unable to pay suppliers to purchase the goods. Some importers are hoarding goods that they fronted the money for after their subsidized dollar invoices went unpaid for months, waiting to disburse the goods until they are confident they will be reimbursed.

The central bank has denied any responsibility for shortages. In a statement released on Thursday, BDL blamed fuel shortages in part on stockpiling by importing companies and smuggling from Lebanon to Syria, claiming that gasoline, diesel and household gas supplies are 10 percent greater this year than in the same period in 2019. The bank added that the current fuel supply is enough to meet Lebanon’s demand for at least 10 days.

Meanwhile, caretaker Health Minister Hamad Hassan reportedly ordered a raid on a warehouse in Beirut’s Hamra area that was allegedly hoarding subsidized medical equipment and infant formula in order to sell them on the black market.

However, Firass Abiad, the head of Rafik Hariri University Hospital, wrote in a series of tweets that “public hospitals will suffer the most,” as they do not have the same flexibility as private facilities to adjust their prices.

“Their patients usually cannot pay extra sums of money to cover the rising costs. Even before the crisis, many of them were reporting an operational budget deficit,” Abiad wrote, calling the deepening healthcare crisis a “domino effect” that would be difficult to roll back.

BEIRUT — Shortages in Lebanon’s key sectors have wrought chaos in the country as fears loom that the worst economic crisis since the Civil War will force an end to a state subsidy program for essential imports, rendering basic goods unaffordable for many residents.Bumper-to-bumper traffic choked streets in the capital of Beirut as drivers waited to fill up at gas stations with long queues....