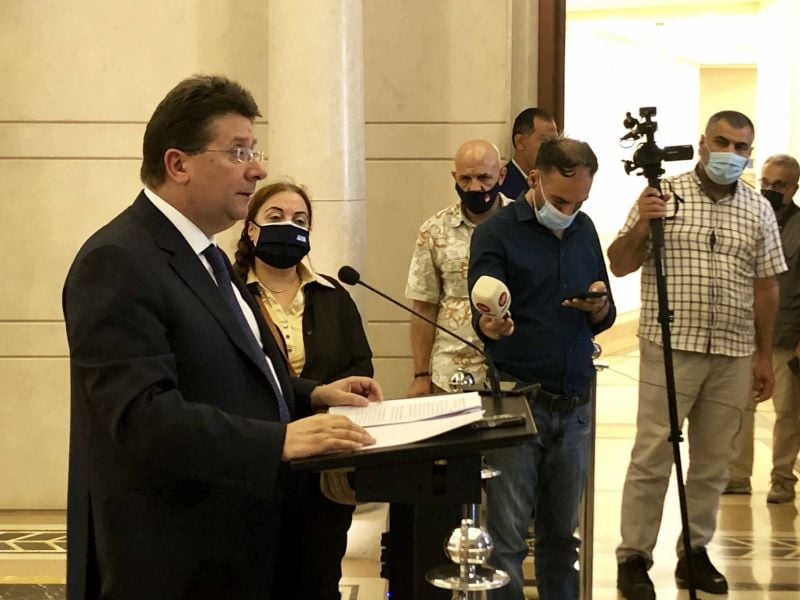 Ibrahim Kanaan (left), the head of Parliament's Finance and Budget Committee, told L'Orient Today that until a government is formed, “it is better to have a law that unifies operations to eliminate discretion at commercial banks." (L'Orient-Le Jour/Philippe Hage Boutros)

BEIRUT — Parliament’s Finance and Budget Committee has approved a draft law that would formalize capital controls on Lebanese depositors, who since 2019 have been at the mercy of ad hoc restrictions imposed by commercial banks amid a foreign currency liquidity crunch.

But while the law, if passed, would standardize restrictions on in-country dollar and lira withdrawals as well as transfers abroad, the precise ceilings remain in flux as the committee has not yet received financial data from Banque du Liban and the Association of Banks in Lebanon that is needed to finalize them.

What’s more, the draft appears to do little to satisfy previous recommendations from the International Monetary Fund aimed at maximizing the effectiveness of capital controls in the Lebanese context. It also does not account for a BDL circular issued earlier this week that sets up a repayment scheme for dollar depositors.

Is the draft law doomed from the outset?

What’s in the committee-approved draft law

The law in its current form, which L’Orient Today obtained a copy of, would apply to all personal commercial bank depositors. Foreign financial institutions, embassies and “international, regional or Arab organizations” are exempted from capital controls.

The draft law would standardize withdrawals for depositors, which currently vary by bank and the size of customers’ deposits. It would allow bank customers to withdraw their full salary in lira, as well as an additional LL20 million a month, although this ceiling may decrease depending on data from the central bank and ABL.

If customers’ salaries are in so-called local dollars, or “lollars” — US dollars that entered the Lebanese banking system on or before April 9, 2020 — the law does not specify at what rate customers will be able to withdraw those salaries. It also does not say at what rate nonsalary “lollar” deposits will be withdrawn.

Instead, the law leaves it to the central bank to adopt a “special formula” at which lollars can be withdrawn, which it says should take into account the exchange rate that will be set by BDL’s official money exchange platform, Sayrafa.

Meanwhile, holders of “fresh dollar” accounts — foreign currencies placed in Lebanese banks after April 9, 2020 — will still be able to withdraw their money in cash dollars and transfer them, both locally and abroad, without any restrictions.

In addition to withdrawal limits, the draft law outlines a series of limited permissible international transfers, which have largely been prohibited since late 2019. However, the transactions are tailored to commitments made before Oct. 17, 2019 — when mass protests erupted against Lebanon’s political class and, shortly after, the lira’s market value began declining more rapidly.

For example, families of Lebanese students who have been studying at universities abroad since before Oct. 17, 2019, would be able to transfer money to cover tuition fees, rent and other living expenses; students who entered university after that date are not eligible for transfers. Depositors would be allowed to settle foreign housing loans as well as “taxes, tariffs and financial obligations due to foreign official authorities,” but only if they were executed before that date. Finally, customers would be able to resume “online subscriptions and applications” using their bank cards, as long as they were regularly making the payments before the Oct. 17 cutoff.

However, the law stipulates that BDL will set a ceiling for each type of transfer, and caps the maximum amount a person can transfer at $50,000 a year. Additionally, for transfers to be approved, depositors must have had the amount requested available in their account on Oct. 31, 2019. Otherwise, they are not eligible for the transfer scheme.

Show me the money

Under the current draft law, banks will cover all dollar transactions as well as the exemptions through the money held at their correspondent banks abroad.

Banks that fail to implement the capital controls as laid out by the law would be subject to penalization under Article 208 of the Code of Money and Credit, which could go as far as canceling a bank’s license.

Additionally, banks can ask BDL to provide it with foreign currencies in order to fund eligible clients’ requests. In turn, the bank has to repay BDL the allocated funds in two weeks, as well as a penalty that will be set by BDL’s council.

The central bank is responsible for monitoring the law’s implementation and is required to report quarterly on its implementation to the finance minister and to BDL’s Higher Banking Commission.

The law does not note any funding source related to BDL’s mandatory foreign currency reserves — which currently stand at a minimum of 15 percent of banks’ total dollar deposits.

All bark and no bite?

“We are surprised by the attack against the capital control [law] as it nears its end in a form that takes into consideration the notes of the IMF,” MP Ibrahim Kanaan (FPM/Metn), the Finance and Budget Committee’s chair, said in May after a previous version of the current draft law was completed.

Last summer, an IMF technical team had reviewed an even earlier draft of the capital control law and provided extensive comments, which were obtained by L’Orient Today, that aimed to help the law “achieve the objective of unifying the exchange rates” in the country. The IMF emphasizing the need for capital controls to be supplemented by “a comprehensive macroeconomic reform plan.”

Lebanon currently has four dollar-to-lira exchange rates: the official peg of LL1,507.5 to the dollar, the lollar withdrawal rate of LL3,900, BDL’s market exchange rate of LL12,000 and the parallel market rate at money changers, which today stood at about LL14,500. It is unclear how the law will achieve the objective of unifying exchange rates.

In fact, Kanaan and MP Nicholas Nahas (Azm/Tripoli), the committee’s deputy head, said unifying exchange rates cannot be done through a capital control law and requires a financial plan from the government. However, Lebanon has been without an empowered cabinet since August of last year, and no end to the current political stalemate is in sight.

Until a government is formed, “it is better to have a law that unifies operations to eliminate discretion at commercial banks,” Kanaan told L’Orient Today.

The IMF also said, “Authorities should monitor banks’ liquidity risks and have contingency plans ready — a plan that takes into account possible future unexpected events — for possible illiquidity in some or several [financial] institutions.”

With the official figures from BDL and ABL still outstanding, it is almost impossible for the law to achieve this.

Meanwhile, the financial sector continues to incur losses, which already totaled LL241 trillion by April 2020, out of which about LL177 trillion were incurred on BDL’s balance sheet.

Even if Parliament passes the draft law, it would be implemented for an initial period of one year; according to its provisions, MPs can stretch or shorten this period by a maximum of one year based on the as-yet-outstanding information from BDL.

Moreover, the enforcement mechanism is unclear, especially as BDL has been floating about its own proposals for repaying dollar depositors.

“The authorities say that the capital control law overrides [any decision from the central bank], while BDL is our regulator. So I will abide by the [decision] that’s least inconvenient to me,” says a senior banker, speaking with L’Orient Today on condition of anonymity.

BEIRUT — Parliament’s Finance and Budget Committee has approved a draft law that would formalize capital controls on Lebanese depositors, who since 2019 have been at the mercy of ad hoc restrictions imposed by commercial banks amid a foreign currency liquidity crunch.But while the law, if passed, would standardize restrictions on in-country dollar and lira withdrawals as well as transfers...