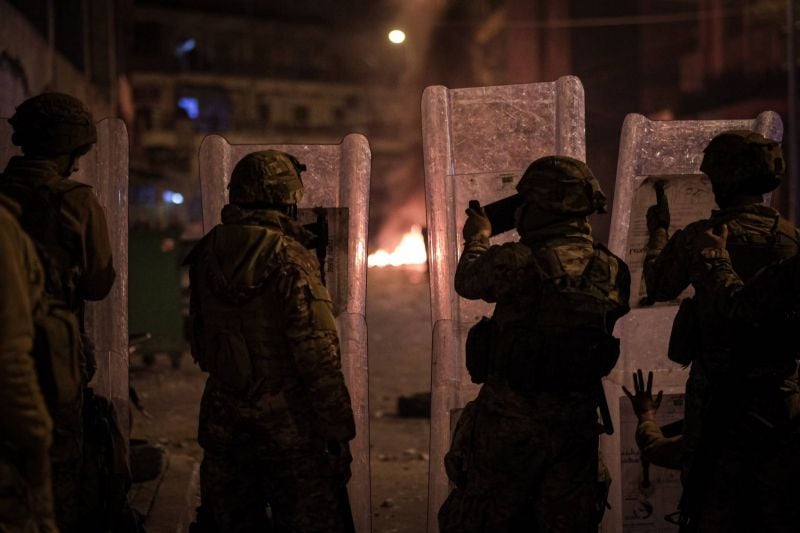 The detainees said they were beaten, slapped and kicked, according to the report, which is based on the accounts of five detainees, their families, two of their lawyers, a judicial source, as well as input from police chief Maj. Gen. Imad Othman. They were also imprisoned in facilities that failed to meet international hygiene standards, served “inedible food” and given water that had a “strange color.”

The detainees were being held on what Human Rights Watch referred to as “unsubstantiated terrorism charges” stemming from their alleged participation in protests that gripped Tripoli in January.

The protests had erupted amid worsening economic and living conditions in the city, which was one of the poorest areas in the Mediterranean coast, even before strict COVID-19 lockdowns were imposed without government assistance to offset the harsh economic impact.

During the protests, some participants had thrown Molotov cocktails at security forces and rocks at police, and set governmental buildings on fire.

However, the interviewees denied that the five detainees engaged in “such serious violence,” the report said, and claimed that they had not been shown evidence implicating them.

The five detainees and several others were taken into custody in Army Intelligence facilities. When their families and lawyers inquired after them, the security agencies reportedly denied having any information for one for five days.

The detainees profiled in the report are only a handful of 35 people — including two minors — whom Military Tribunal Prosecutor Fadi Akiki brought a total of 12 charges against in relation to the January protests, including terrorism, forming criminal associations and theft, the report said.

Terrorism charges are potential death penalty cases in Lebanon, although the country has not executed anyone since 2004.

“One of the minors was 15 years old and was disappeared for a number of days,” Ayman Raad, a lawyer representing Tripoli protesters, told L’Orient Today.

He said the Internal Security Forces had published a missing persons report after his mother had reported him missing at a police station in Qibbeh, even though the boy was located in an Army Intelligence facility a few hundred meters away.

The report quoted his mother as saying that he “was beaten, subjected to falaka” — beatings on the soles of the feet — “and threatened with electric shocks.”

The protesters were also allegedly denied the right to a lawyer during their preliminary interrogations and had their investigation records forged.

“Article 47 of the Code of Criminal Procedure clearly states that a lawyer must be present, and if someone can’t afford a lawyer then the Bar Association would appoint a lawyer,” Raad said.

The 35 residents are set to be tried before Lebanon’s military courts.

“The people charged in the terrorism case were not presented with any evidence indicating that they had participated in some of the most violent incidents during the protests,” Majzoub said.

“This is the first time that prosecutors have charged protesters with terrorism since the October 17, 2019, uprising, signaling an escalation in the state’s response to the protests,” she added.

“While some people in the Tripoli protests did use violence, their crimes can be more accurately construed as arson, rioting or vandalism.”

Four of the 35 people charged in the case remain in detention, and 19, including the children, were released. The fate of the other 12 remains unknown, the report said.

Court proceedings have been held up due to the coronavirus lockdown, Raad said, with Military Investigative Judge Marcel Bassil yet to resume proceedings after contracting the virus.

“We’re currently waiting to release the remaining four on bail,” Raad said, adding that a final decision on the indictment has yet to be issued.

The army could not be immediately reached for comment.

BEIRUT — Lebanon’s military intelligence “forcibly disappeared and allegedly tortured” protesters who took part in dayslong demonstrations against COVID-19 lockdown measures that were exacerbating already deteriorating living conditions in northern Tripoli, Human Rights Watch said in a report on Tuesday.The detainees said they were beaten, slapped and kicked, according to the report,...