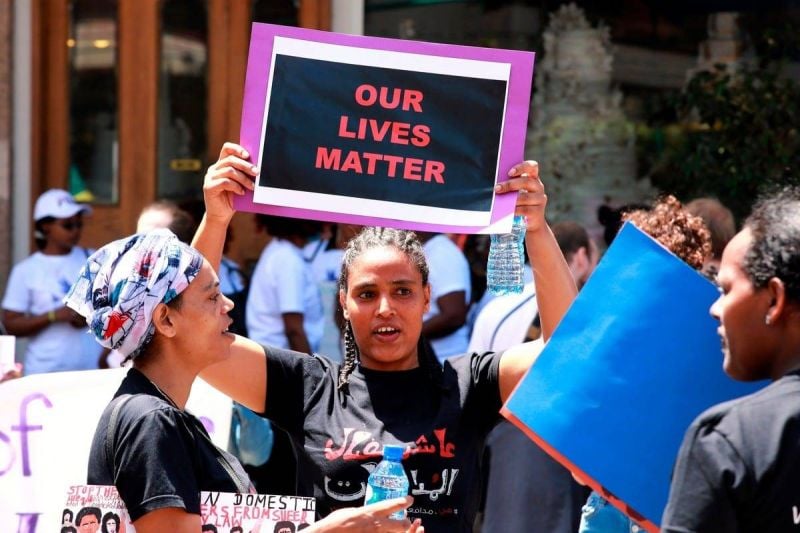 Migrant domestic workers protest in Beirut over their work and living conditions in May 2019. (Credit: AFP)

BEIRUT — Last week, Lebanese General Security issued a decision to no longer allow employers to file criminal complaints against migrant domestic workers for “running away” from their workplace.

It was hailed as a new victory in the fight against the kafala, or sponsorship, system that controls the relationship between employers and domestic workers. However, advocates say there is still a long way to go towards dismantling what many see as an oppressive system that deprives these workers — most of them women — of their rights and leaves them vulnerable to abuse.

Here’s what the decision means and how it fits into broader efforts to combat the abuse of migrant domestic workers in Lebanon.

Why was this decision needed?

Until the implementation of this decision, a domestic worker who decided to permanently leave their employer’s household without the agreement of the employer would often be faced with criminal charges.

Under the kafala system, domestic workers’ legal residency on Lebanese territory is tied to a specific employer, who is legally responsible for the worker.

As domestic workers’ residency is directly linked to one employer, leaving their job would put them in violation of residency laws. However, this in itself is not a criminal offense that would be pursued in the justice system.

However, in practice, in order to eschew their responsibilities as a sponsor for a worker who had left, former employers would typically register the migrant worker’s departure with the public prosecution or security forces, thereby launching criminal proceedings against the worker.

This is despite the fact that there is no legal basis for criminal proceedings against migrant workers for simply leaving their employer, explained Ghina Al Andary, a social worker at feminist NGO KAFA’s anti-trafficking unit.

In a report published in September, KAFA found that in 40 out of 50 criminal cases involving migrant domestic workers, they were formally accused of “running away” from their employer’s home, using the Arabic word al-farar.

“This language is implicit of the slave-like relationship between domestic workers and their employers in Lebanon,” Andary told L’Orient Today.

In addition, the labeling of a domestic worker who leaves her employer as a “‘runaway’ deprives them of the right to resign from their job, which is one of the main issues with kafala,” said Zeina Mezher, who works on labor migration at the International Labor Organization.

While “running away” in itself is technically not a crime, complaints would often be accompanied by false accusations of wrongdoing committed by the domestic worker against the employer, according to Farah Baba, an advocacy and communications officer at migrant rights group the Anti-Racism Movement.

“They cannot technically report a domestic worker for running away, but they can falsely accuse them of trying to steal from or harm them,” Baba continued. “And this would almost always end up with a criminal case.”

In several cases tracked by KAFA, employers admitted they had only filed a complaint of theft because authorities would not otherwise register the report that the worker had left and thus officially remove the employer’s legal responsibility for them. In 23 cases, employers did not follow proceedings until a ruling was issued, suggesting that they were uninterested in the outcome and that the accusations may not have been genuine, Andary explained.

“Being falsely accused of crimes is one of the main challenges that complicate access to justice,” Mezher said. Criminal charges against domestic workers also make it difficult for them to travel outside of Lebanon.

Prior to the economic crisis, there were an estimated 250,000 migrant domestic workers in Lebanon. This number is now thought to be much lower, as many have left the country in the aftermath of the financial collapse, COVID-19 pandemic and Aug. 4 explosion.

Since the issuance of the decision, the criminal process has been replaced with an administrative one, whereby the employer can report the employee’s departure without the need to involve the judiciary.

“The idea is that from now, the workers will no longer be treated as criminals,” Andary said.

The Labor Ministry, which has been involved in discussions to change the procedure, also offered its support to the initiative, according to Marlene Atallah, the ministry’s acting director-general.

“Previously, there were incidents where migrant workers were being prosecuted without legal justification,” she said. “This way, it is a much more straightforward process for employers to effectively end contracts.”

The Labor Ministry has also issued a memo saying that publishing notices and images of advertisements about domestic workers who have left their employers is “defamation” and a violation of human rights.

The language used around migrant workers has also changed. The Arabic word al-farar, or running away, is no longer used in General Security’s official records, and has instead been replaced with the words “leaving the workplace.”

“We’re moving away from slavery-like terms and that’s a positive thing,” Baba said. “It paves the way to considering this a labor relationship and not an enslavement of a worker.”

However, the General Security decision still squarely places the power in the hands of the employer.

“It frames the employer as the victim in some way and allows employers to absolve themselves of responsibility,” Baba said. “It sticks to the core of the system, that the employer is responsible for the worker.”

How much difference will the decision make?

While a significant advancement towards gaining more rights for domestic workers in Lebanon, so-called running away charges are just one of what rights groups describe as a whole web of injustices against one of the country’s most marginalized groups under the kafala system.

In September last year, caretaker Labor Minister Lamia Yammine announced the approval of a standard unified contract for migrant domestic workers, which would grant them more rights and legal protections, including the right to leave an employer at will with a month’s notice. However, it was stopped from going into force by the Shura Council, Lebanon’s highest administrative court, amid pressure from worker recruitment agencies and is still in limbo, Atallah said.

“The latest decision is a step to reduce the stigma over workers who leave their employment; however, the right to labour mobility for migrant workers is still not guaranteed,” Mezher said.

Despite the removal of criminal charges for leaving the employer’s home, a domestic worker that does so is still at risk. As their legal status is still tied to an employer, they will be violating residency laws and could be subject to fines, detention or even deportation.

In addition, as Baba highlighted, there remains the potential for disgruntled employers to level false accusations against their domestic workers.

For those working to improve conditions for domestic workers, true justice cannot be achieved while the sponsorship system remains in place.

“We are completely against the kafala system and believe it should be abolished,” Andary said. “We are moving forward but it’s not the end.”

BEIRUT — Last week, Lebanese General Security issued a decision to no longer allow employers to file criminal complaints against migrant domestic workers for “running away” from their workplace.It was hailed as a new victory in the fight against the kafala, or sponsorship, system that controls the relationship between employers and domestic workers. However, advocates say there is still a...