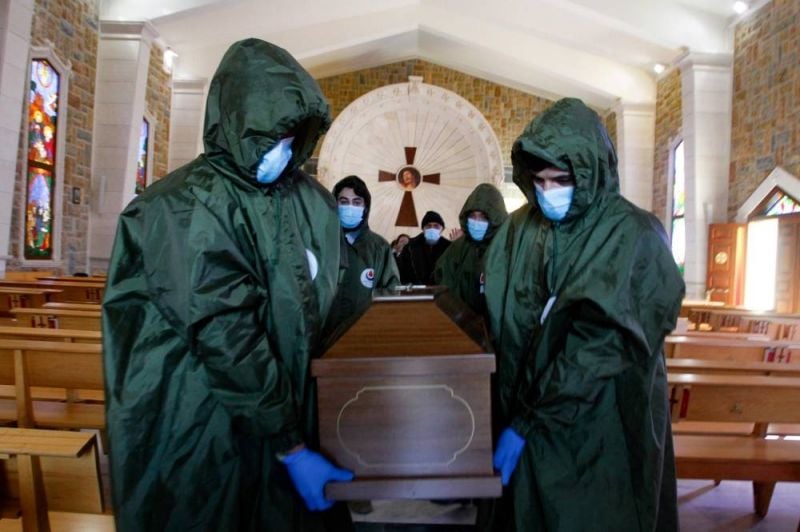 While confirmed COVID-19 infections have dropped, the post-holiday surge in deaths has continued. (Credit: Mahmoud Zayyat/AFP)

BEIRUT — As the gradual eight-week phasing out of the strict coronavirus lockdown began Monday, hospitals continued to struggle under the strain of running near-full COVID-19 units.

According to statistics gathered by the World Health Organization, bed occupancy in intensive care units has gradually declined in the last two weeks of the lockdown, falling from 94 percent on Jan. 25 to 89 percent on Feb. 7.

Still, this means only around one in 10 beds for critically ill COVID-19 patients is available on average.

“Maybe in the peripheries the pressure has eased a little bit, but here it’s never stopped,” Mouhamad Tahini, a resident doctor at Rafik Hariri University Hospital, told L’Orient Today. “We are the central COVID-19 hospital after all.”

The hospital’s intensive care, regular and outpatient coronavirus departments are all constantly full of confirmed and suspected COVID-19 patients, he said. The stringent lockdown measures in place since mid-January have not changed much.

“But of course,” he added, “without the lockdown it would have been even more catastrophic, something that’s hard to imagine.”

Doctors and nurses are still treating patients who were infected when restrictions were lifted over the Christmas and New Year’s holidays, said Ola Mazboudi, a pulmonary and critical care specialist at Hammoud Hospital University Medical Center in Saida.

“In the intensive care units, turnover for patients is not very fast and it’s taking us a long time to treat them,” she said. “We are still dealing with a large load of patients.”

ICU occupancy varies significantly between regions. The WHO numbers show that in Beirut, 99 percent of ICU beds are currently occupied, while this figure drops to 85 percent in Mount Lebanon.

At Mount Lebanon Hospital in Hazmieh, medical director Elie Gharios estimated occupancy to have fallen to around 80 percent.

“Thankfully, we are much more at ease in terms of finding places for patients and having the right numbers of personnel,” he said. “Still, I can’t be too confident — you never know what the coming weeks will bring.”

For the first time in over three weeks, supermarkets and grocery stores opened their doors to customers, albeit with new controls in place.

Customers are now required to obtain permission to visit the supermarket via the Impact platform or SMS, which allocates them a two-hour time slot in which to get to and from the shop and make their purchases.

At supermarkets in Beirut, small crowds of people built up at entrances as store staff processed digital QR codes, which must be scanned on entrance and exit.

Banks also relaunched in-branch services, but with capacity capped at 20 percent, familiar scenes of long lines of people waiting to be allowed in returned. Several banks have implemented an appointment-only system to reduce crowding.

Shop owners in the port city of Saida staged a protest Monday morning against not being allowed to resume trade, saying ongoing closures would drive businesses into the ground.

The current restrictions, including an ongoing 24 hour-curfew, are set to remain in place until Feb. 22, when the second of the reopening plan’s four phases will come into effect. At this stage, car mechanics, building sites, travel agents and florists, among others, will be permitted to return to work.

BEIRUT — As the gradual eight-week phasing out of the strict coronavirus lockdown began Monday, hospitals continued to struggle under the strain of running near-full COVID-19 units.The Health Ministry registered 2,063 new cases of COVID-19 Monday and 61 more people died from coronavirus-related illness, bringing the total death toll to 3,677.According to statistics gathered by the World Health...