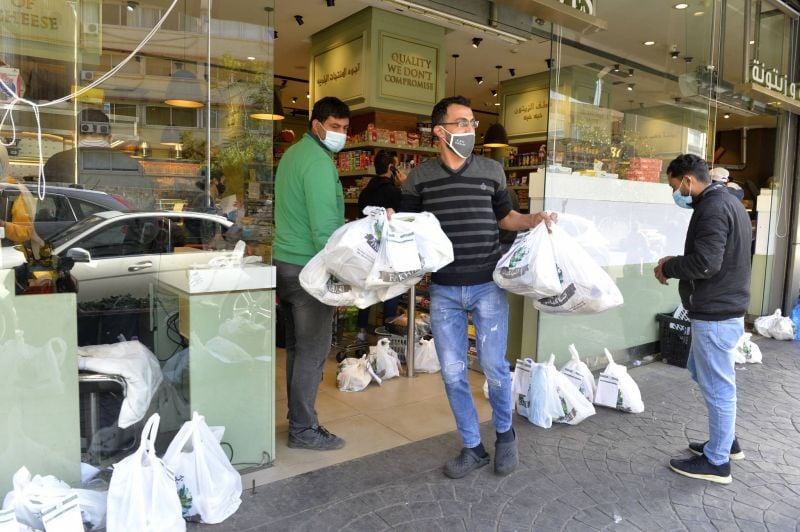 A delivery worker leaves a shop on a run. (Credit: Annahar)

BEIRUT — Tomorrow Lebanon enters its most restrictive lockdown yet, shuttering for the first time all non-medical sector businesses, including greengrocers and supermarkets, for everything but home delivery. But while retaining delivery in theory assuages concerns about access to essential goods and foodstuffs, supermarkets and delivery service providers worry that a lack of forewarning and planning means they will be unable to keep up with demand during the 10-day mandatory closure.

The head of the Syndicate of Supermarket Owners and owner of the Fahd supermarket chain, Nabil Fahd, said supermarket delivery services will not be able to cover more than 5-10 percent of demand during the 24-hour COVID-19 curfew.

“Lebanese supermarkets offer online or phone call deliveries to complement their business model and cater to a small portion of people who cannot pick up their groceries,” Fahd told L’Orient Today, adding, “Thus, they don’t have the necessary equipment or human resources to shift from a regular on-site model to a delivery-based one.”

On a typical day at Le Charcutier Aoun, another supermarket chain, only 5 percent of purchases are placed through phone or online orders and delivered to customers, while 95 percent of sales are made on site, marketing director Riad Khairallah said.

Now, with 100 percent of customers obliged to use online or phone delivery channels, these businesses worry that they will be unable, largely due to the state’s “last minute decision,” to scale up delivery operations to meet demand.

Ghaleb Dghaim, administrative director for the Makhazen supermarket chain, which, he says, “usually welcomes 2,000 customers [per day] to each branch,” pointed out that orders that are usually delivered within an hour will now “witness a three to four hour delay.”

Dghaim also highlighted an additional challenge: obtaining authorization for delivery drivers to operate during a lockdown when most vehicular transport is banned.

“We are struggling to finish passes for our delivery persons within the two days [since the lockdown was announced] so that they can identify their occupation to the police when they go out and about,” he said.

“The Lebanese customer likes to examine and hand-pick fruits and vegetables, so we expect that a lot of people will return their orders with the delivery person and ask for a better pick,” Khairallah said.

Meanwhile, third-party delivery companies — used by some supermarkets, including Fahd and Le Charcutier Aoun — are also bracing themselves for overwhelming demand in the coming 10 days.

Nael Halwani, the chief operating officer and co-founder of the on-demand delivery company Toters, said the platform’s infrastructure will not be able to fulfill the markets’ demands “because that will probably need around 10,000 drivers, while Toters only has 1,000.”

The company, which operates through a popular online app, is scrambling to recruit additional drivers by offering incentives to potential and existing freelancers to work as many hours possible, Halwani said, assuring that Toters will continue to enforce its strict COVID-19 preventive measures.

Halwani added that if Toters has capacity, the company “will be more than happy to let other supermarkets use our platform to deliver for more customers.”

Makhazen is also working on an initiative to increase delivery capacity. Dghaim says that employees who generally work inside the supermarket can now take delivery shifts if they own a motorcycle.

Fahd, meanwhile, says that many third-party delivery services will add a charge for delivering orders totaling less than LL200,000. This will encourage purchasers to place fewer, larger orders and spare delivery persons from going back and forth with many smaller orders, Fahd explained.

Mohammad Yassine, a dekkeneh owner in Hamra, said that 60 percent of purchases from his store are made via phone call and delivered by his staff. To increase delivery capacity during the total lockdown, Yassine will simply reorganize how he deploys his staff: “While we usually have three employees working inside the store and three on delivery, during the lockdown we will have one person in store to take the orders and five on delivery.”

Yassine added that because local stores like his usually serve customers within a walkable radius, employees don’t need to be equipped with vehicles to complete deliveries.

Although supermarkets will endeavor to adapt to their new working conditions, all the managers L’Orient Today spoke with denounced the government’s decision to shutter their stores to customers, and said the COVID-19 committee should reconsider.

Fahd suggested that the government should follow precedents and adopt successful measures used in the US and UK when dealing with supermarkets.

“Knowing the high demand for food products coupled with the density of shoppers, countries such as the US and UK extended working hours for supermarkets so as to avoid crowds,” he said. “That way people come at their own pace and during different times, without overwhelming the supermarkets.”

BEIRUT — Tomorrow Lebanon enters its most restrictive lockdown yet, shuttering for the first time all non-medical sector businesses, including greengrocers and supermarkets, for everything but home delivery. But while retaining delivery in theory assuages concerns about access to essential goods and foodstuffs, supermarkets and delivery service providers worry that a lack of forewarning and...

Salameh admits the lira peg, his signature policy, ‘is finished’ as BDL reserves near a critical threshold for subsidies

Lebanon’s domestic agricultural production is faltering, even though import subsidies may be close to an end

The Economy Ministry has a plan to fix subsidies. Here are the details — and why it likely won’t be implemented

After its release from Lebanon, a mysterious fuel ship hid its voyage to Syria

The Port of Beirut has insurance, but its policy could prove vastly inadequate if it is found liable in the explosion investigation