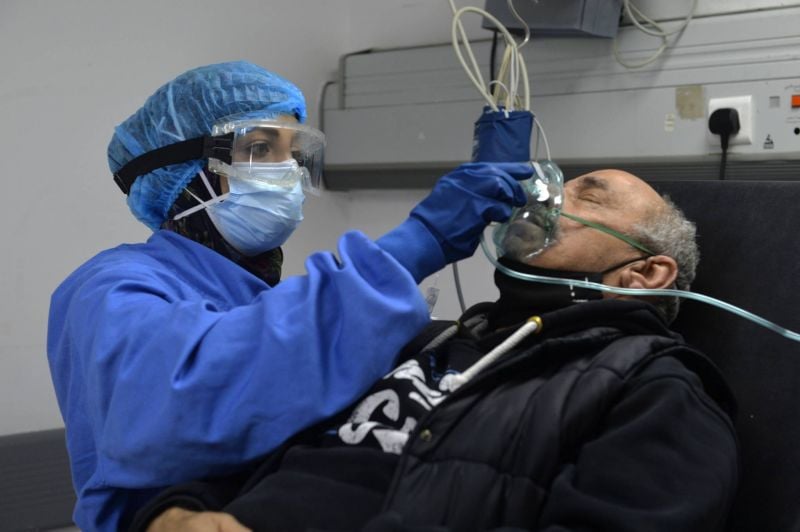 BEIRUT — For the past two days, Jessy Shoucair has been making nonstop calls. She’s on a desperate hunt for a machine that will supply a friend’s father, who is suffering from COVID-19, with potentially life-saving oxygen.

But oxygen generators or concentrators, which purify surrounding air to produce a higher supply of oxygen for their users, have become elusive.

Over the past few days, dozens of people have taken to social media to crowdsource these machines for family, friends and loved ones who have been unable to find a place in a hospital but are struggling to breathe.

“We were on the phone all day” Monday, Shoucair told L’Orient Today, “but we always get the same reply: there are none left.”

Walid Omeich, the general manager of Scorpion Medical, said that his entire stock of oxygen generators has been sold, after a surge in new requests since the New Year due to the rising number of coronavirus cases.

During our 15-minute phone interview, he received at least six calls from customers inquiring about generators.

The medical center at the Orthodox Youth Movement in Beirut decided to rent out its 15 oxygen concentrators free of charge to people in Beirut and Mount Lebanon who have been unable to find a hospital bed or are currently not in need of critical hospital care.

Less than an hour after the group publicized the initiative on social media on Saturday, all 15 machines were allocated, said volunteer Randa Eid.

“We had to turn off our phones because we had more than 400 calls in two days,” she said.

Dr. Ola Mazboudi, a pulmonary and critical care specialist at Hammoud Hospital University Medical Center in Saida said there has been a “notable increase in COVID-19 cases where people need oxygen supply at home,” explaining that hospital admissions are now being prioritized for the most critically ill patients, who require intensive care.

According to the latest figures from the World Health Organization, 95 percent of beds in COVID-19 intensive care units are occupied. In Beirut, 98 percent are full, while occupancy has reached 100 percent in Nabatieh.

As an alternative, doctors are recommending that COVID-19 patients needing oxygen therapy buy or rent at-home oxygen generators, Mazboudi said, as they are generally regarded as the safest, easiest and longest-lasting method of increasing blood oxygen saturation.

Unlike oxygen cylinders, which contain liquid or compressed gas, oxygen generators increase the oxygen concentration of air drawn from the surrounding atmosphere. Patients then breathe in the oxygen-rich air via a cannula, or small tube, in their nose.

In addition to higher demand due to increased pressure on hospitals and rising COVID-19 cases, there is another reason for the disappearance of these respiratory devices, said Salma Assi, the head of the Medical Equipment and Devices Importers’ Syndicate.

She estimated that up to 70 percent of calls received by suppliers over the last few days were from people requesting oxygen concentrators for “standby use” in case a family member falls ill.

“But we are getting calls from people who really need it and the situation is becoming really dangerous,” Assi said.

Both Omeich and Eid said they had received dozens of calls from people looking to reserve the machines in advance, as a backup.

It makes searching for oxygen concentrators for friends and loved ones even harder.

“There is nothing to be done at this point,” Shoucair said, as she continues her quest to find a machine for her friend’s father. “People are being really irresponsible and selfish.”

To combat this, the Medical Equipment and Devices Importers’ Syndicate sent out a memo asking its members to only sell or loan oxygen generators to customers with a doctor’s note and a positive COVID-19 test.

Assi also implored in a video posted Sunday night that people only request machines when they are in serious need. She also warned of counterfeit machines that “pump out normal air” rather than oxygen being offered on the market.

As people continue their frantic search, some have taken the opportunity to make a profit off people’s desperation, and a “black market” for respiratory devices has begun to emerge.

Oxygen concentrators, masks and gas tanks have appeared on e-commerce site OLX, often at a huge markup — machines that typically cost between $750 and $1,000 are offered for up to $1,900.

When contacted by L’Orient Today, one seller said they no longer had the $1,350 model advertised, but could offer another machine for $2,500, in cash dollars or at an exchange rate of LL9,000.

Others said they were out of stock.

Mazboudi, the pulmonary specialist, warned that the phenomenon of machines being sold unchecked on social media and sites like OLX could be dangerous as the patient cannot know their authenticity, purity and safety.

“We’d always prefer to have a trusted source,” she said. “I absolutely do not recommend buying the machines online.”

Syndicate-approved suppliers are now working to replenish their depleted stocks, but are facing numerous challenges to import equipment from abroad.

The machines are not covered by the central bank’s subsidy scheme, so they must pay 100 percent of their bills up front, in cash dollars — now a rare and expensive commodity.

“It’s a total mess,” said Omeich. “There is a huge demand but there are hardly any dollars in the market to purchase supplies with.”

Then, if they do manage to place an order, it may be a long time before the goods arrive in Lebanon and are ready to be distributed.

Omeich said he has put in an order for new generators, but was told by his supplier in China that production will take seven days and freight will need another 15 days. Factoring in an estimated 15 additional days to clear Lebanese customs, an order placed today would arrive in over five weeks.

In her video, Assi appealed to Lebanese Customs to ensure that once goods arrive, they are processed as quickly as possible with minimum delays.

Meanwhile, dozens of people are still desperately hunting down machines in the hope of keeping their loved ones out of intensive care. If they are unable to do so, the consequences could be tragic.

“If patients who truly need oxygen can’t get it and hospital beds remain full,” Mazboudi said, “we might start seeing an increase in the number of people dying at home.”

You can find the approved list of oxygen suppliers published by the Medical Equipment and Devices Importers’ Syndicate here.

BEIRUT — For the past two days, Jessy Shoucair has been making nonstop calls. She’s on a desperate hunt for a machine that will supply a friend’s father, who is suffering from COVID-19, with potentially life-saving oxygen.But oxygen generators or concentrators, which purify surrounding air to produce a higher supply of oxygen for their users, have become elusive. Over the past few days,...