Whatever happened to women's rights legislation? A long overdue update 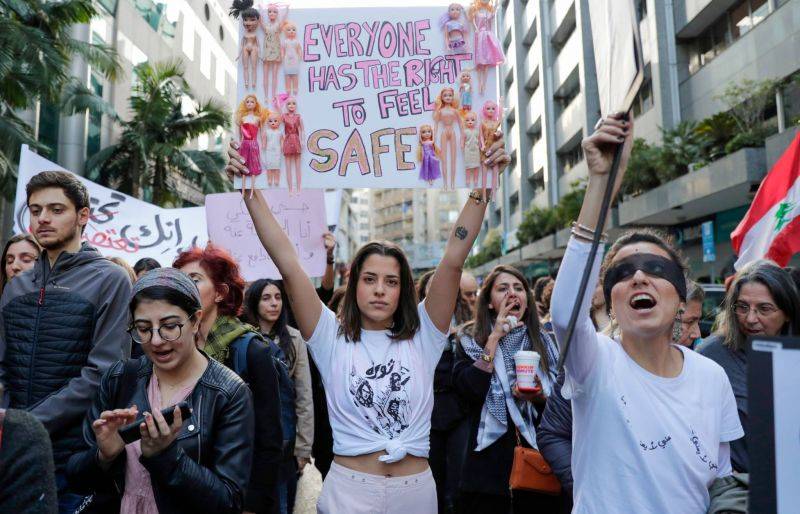 BEIRUT — In July 2019, then-Minister of State for Economic Empowerment of Women and Youth Violette Safadi and Prime Minister Saad Hariri announced with much fanfare plans to set a special legislative session to take up a range of proposals for advancing women’s rights, some of which had been languishing in the drawers of parliamentary committees for years.

Soon after, in September 2019, Lebanon’s cabinet signed off on a national plan for women, peace and security which listed a set of legislative proposals that should be pursued as priorities.

The list included passing a law against sexual harassment, strengthening the country’s existing domestic violence law, banning child marriage, giving women the same right as men to pass their nationality on to their children, introducing quotas for women’s representation in political office at the local and national levels, and amending the labor and social security laws to ensure equal treatment of men and women, among others.

But the planned March 17 legislative session never happened. Following the outbreak of mass anti-government protests, Hariri resigned and his government fell. The post of the minister of state dealing with women’s affairs was eliminated in the subsequent cabinet. Then came the coronavirus pandemic and lockdown, followed by the Beirut port explosion, which led to the resignation of Hariri’s successor, Prime Minister Hasan Diab, and the fall of his government.

With the series of crises, women’s issues were largely put on the back burner.

“Everything that is related to women is not a priority [to the country’s leadership],” said MP Inaya Ezzeddine (Amal/Sur), the chair of Parliament’s Women and Children’s Committee. “Whenever you have all these crises, they push it down the list.”

That’s despite the fact, Ezzeddine pointed out, that women had been bearing the brunt of the impacts of the coronavirus pandemic, both in the domestic sphere and in the health care field.

“Protecting and empowering women should be a priority now,” she said.

Although the country is once again in political limbo awaiting the formation of a new government to be headed by Hariri, there have been some new signs of movement on women’s rights issues.

On Tuesday, legislation sponsored by Ezzeddine to outlaw sexual harassment was signed off on by the parliamentary Administration and Justice Committee and is now headed to the full Parliament for discussion. And proposals to strengthen the country’s domestic violence law and to give women the right to open bank accounts for their children will be up for discussion in committee in the coming week.

Here’s an overview of some of the major women’s rights proposals that could be on the table next, and why they have stalled.

Bank accounts for children: Another proposal introduced by Ezzeddine and currently under discussion in committee would give mothers the right to open bank accounts for their minor children without having to seek court approval. While on its face, the proposal seems uncontroversial, Ezzedine said it is not so straightforward.

OK, but they’re being able to open the accounts. Why should we apply this to women and not to men?”

Domestic violence: Lebanon’s Parliament passed a law criminalizing domestic violence in 2014, but it left gaps that advocates have been trying to fill since. The proposed amendments will be up for discussion in a joint parliamentary session Wednesday, said Leila Awada, an attorney with Kafa, a feminist civil society organization that has been working on the issue. One key change that advocates have been asking for would be to remove the children from their father for their protection in cases in which he is proven to have abused the mother.

The proposed change is controversial, however, because religious authorities see it as overriding their authority to set child custody rules. The National Commission for Lebanese Women, which is advocating for the change, said in a statement that the removal of children from their father in domestic violence cases would be a “temporary decision” that “aims to protect children from violence and does not aim in any way to amend custody provisions that remain subject to the jurisdiction of the competent religious courts.”

Child marriage ban: Marriage and divorce are also legally under the jurisdiction of the religious courts in Lebanon, with each of the country’s 18 recognized religious sects setting its own minimum marriage age — in almost all cases, under the age of 18. Advocates have pushed for legislation that would set an across-the-board minimum age of 18. A number of bills that would do that — some with exceptions and some without — have been introduced and discussed in parliamentary committees, but none have yet moved to the full Parliament.

The nationality law: For years, advocates have been campaigning for an amendment to the country’s nationality law to give Lebanese women the same right as men to pass their nationality on to their children and spouses. Under the current law, children of Lebanese women married to non-Lebanese men are not eligible for Lebanese citizenship, even if they are born and raised in the country. In some cases, this results in the children being legally stateless; in others, it has led to the children having difficulties in access to education, work or the right to own property.

Attempts at reform have run into opposition, in large part because of sectarian fears that naturalizing the children of Palestinian and Syrian refugees — who are primarily Sunni — would upset the country’s demographic balance.

The most recent reform proposal, introduced by the NCLW, had drawn fire from some advocates as it was seen as compromising too much; the bill would allow women to give nationality to their children, but not to their spouses, and would create a two-tiered system for the children, with those who are under age 18 when the law is passed getting citizenship immediately, while older children would be given a “green card” and a path to apply for citizenship later.

NCLW head Claudine Aoun told L’Orient Today that Parliament had been balking at taking up even this more limited proposal. “This issue — they’re not able to see it as linked to women’s rights and human rights. They’re linking it to the political and sectarian situation and the sectarian regime in Lebanon,” she said.

Personal status law: Because Lebanon defers to religious courts on matters of marriage and family, each of the 18 recognized sects are governed by a different set of rules when it comes to personal matters. In many cases, the religious court rules favor men on issues like child custody. As a result, one of the overarching demands of advocates and rights groups, has been to create a single, civil code to govern personal status matters for all Lebanese citizens.

While prominent figures, including President Michel Aoun (who is Claudine Aoun’s father), have voiced support for the creation of a unified personal status code, to date no legislation has been introduced. Kafa is working to develop a legislative proposal, but Awada said the group wants to prepare a campaign before introducing it.

Jumanah Zabaneh, a program coordinator with UN Women’s Lebanon office, which has an agreement with the NCLW to provide support in working on reforms, said the campaign for the sexual harassment legislation had offered some good precedents for future campaigns.

Whereas often different groups or members of Parliament put forward competing pieces of legislation on the same issue, in this case, she said, all the stakeholders had come together to hammer out a single proposal.

“So, that’s a good practice, that we have one proposal going to the committee, and after that to the Parliament, that all actors endorsed,” she said. “If there are many proposals, people should sit together and come up with one proposal and then go to the committee. Unify the front, that should be a prerequisite to having any conversation about legislative reform.”

But while there appears to be some momentum on reforms now, advocates said they still see an uphill battle ahead of them. And steps toward progress can be fleeting or quietly shelved, as the scuppered March session of Parliament shows.

“You see how much effort it is taking,” Claudine Aoun said. “There is progress, but if there were a high-level political decision that … there should be equality, the laws would come one after another. But the masculine mindset still doesn’t doesn’t acknowledge the woman and all her rights in Lebanon. There is still a lot of work to be done.”

BEIRUT — In July 2019, then-Minister of State for Economic Empowerment of Women and Youth Violette Safadi and Prime Minister Saad Hariri announced with much fanfare plans to set a special legislative session to take up a range of proposals for advancing women’s rights, some of which had been languishing in the drawers of parliamentary committees for years.

Soon after, in September...

Everything you need to know to start your Monday

Behind the scenes of Macron’s failed gambit in Lebanon

A Lebanese MP, his son and their business with men who allegedly stole billions from Venezuela