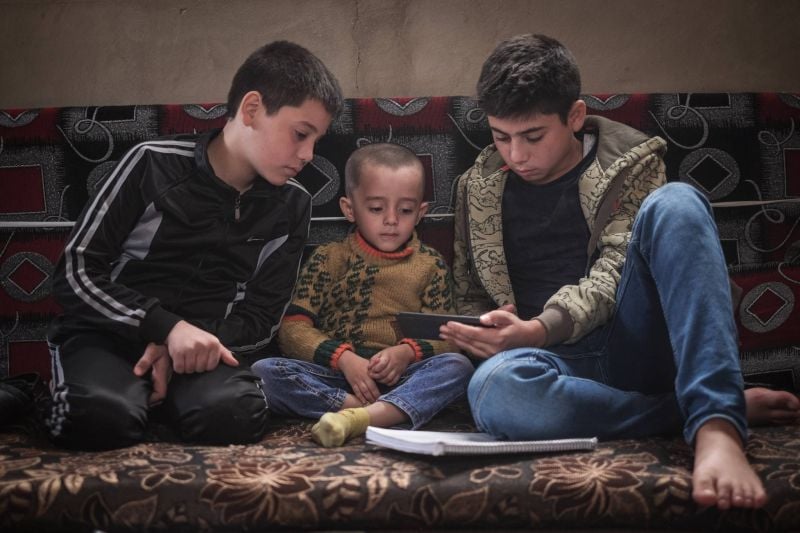 Abdel-Rahman, 12 (right), and his brother, Ahmad, 10 (left), play with their small nephew in their family's tent in Arsal. The boys are out of school this year after the informal school they were attending was closed down. (OLJ/João Souza)

ARSAL, Baalbeck — Several thousand Syrian refugee children who had been attending uncredentialed community schools in Arsal found themselves facing the prospect of no school this year, after Lebanon’s Education Ministry ordered the learning centers to be shut down without immediately offering an alternative.

There are about 10,000 primary school aged Syrian children in Arsal, and the public schools only had space for about 3,500 of them last year, said Nabil Khalouf, the head of operations in Arsal for Edinburgh Direct Aid, an NGO that ran one of the informal camp schools before it was shut down.

Until last year, some 5,000 children had been attending eight informal “Syrian schools” funded by various NGOs, he and others working in the education field in Arsal said. The classes were primarily taught by Syrian teachers, who worked as volunteers with some receiving a small stipend.

The Education Ministry had ordered the schools to be shut down during the last school year because they are unlicensed, but postponed execution of the decision until the end of the school year.

In the meantime, the COVID-19 pandemic forced all schools to close their doors in the spring, but parents and teachers had hoped that the order to permanently shutter the informal schools would be canceled or postponed again. However, at the beginning of the 2020-21 school year, Khalouf said, they were informed that the order still stood and the unlicensed schools were forbidden to reopen or register students.

A classroom sits empty at Future Syria School, an informal school that was opened in Arsal by the NGO Edinburgh Direct Aid in 2017 and had about 200 students before it was shut down this year. (OLJ/João Souza)

While plans are in the works to accommodate a portion of the children previously enrolled in the Syrian schools in classes in licensed public or private schools, it remains unclear how many will find spaces.

“Until now no one knows what will happen. The ministry is not answering, and UNICEF is not answering and UNHCR is not answering,” Khalouf said. “If the children don’t go to school, where will they go? They will go down the other path, which is the path of drugs or extremist ideas.”

Multiple Syrian parents in Arsal told L’Orient Today that they had been unable to find a spot for their children in the public schools, which are especially crowded this year due to the economic situation and an influx of Lebanese students transferring from private to public schools.

“No school agreed to take them, not a single school,” said Mona al-Smail, a widowed Syrian mother living in one of the informal camps with four children ranging from first to sixth grade who had been enrolled in one of the now-shuttered informal schools. “I went around to all the schools. There is no room, just for the students from last year.”

The other option, private school, is out of reach for her, as for most refugee families. Smail said she would struggle even to pay for the cost of the van to send her children to public school if they were accepted.

Nijoud al-Zahouri, also a widow, with five children who are now out of school because of the closures, said, “I can’t put them in private school or with a private teacher because we don’t have any income except the food assistance card. And what does that do now?” She was referring to UN assistance to families deemed particularly vulnerable, which used to amount to $27 per person per month, but is now paid in Lebanese currency — just LL70,000.

Sonia Khoury, program manager for the unit overseeing education for Syrian students in the Education Ministry, told L’Orient Today, “The minister closed these schools because they were not officially authorized to open — they have no license.”

She added that there are three public schools in Arsal that could open a new “second shift” of afternoon classes for the Syrian students. “A plan was put in place to do so, and [the ministry] is closely following,” she said.

However, it was unclear when the new classes would open and whether they would have the capacity to take all the remaining students.

Meanwhile, Hand Organization, an NGO that had been working in the area, has reached a deal with two private schools to rent space for classes for about 1,200 Syrian students in the fifth to ninth grades, according to the NGO’s executive director, Saadettin Muvakit. Since the classes would be under the umbrella of a licensed school, those students would be able to receive official certificates. He said the organization is waiting for approval from the ministry to open additional afternoon classes for about 1,600 younger students.

A UNICEF spokeswoman said in a statement, “UNICEF is monitoring the situation closely and working hand in hand with all partners on finding the best solution as soon as possible.”

‘If the children don’t go to school, where will they go?’

Bill Van Esveld, the associate director of Human Rights Watch’s children's rights division in the Middle East, said that while shutting down unlicensed schools would be a legitimate action if the children were able to enroll in formal schooling, “shutting down schools for administrative reasons obviously violates the right to education if it leaves … children out of school.”

“The priority must be ensuring the kids' education,” he said. “If Lebanon doesn't have the resources to do that in public schools, it certainly shouldn't be using its scarce resources to kick kids out of unofficial schools.”

For some former students, being out of school may will mean an entry into child labor.

Zahouri’s 12-year-old son, Abdel-Rahman, said if the schools don’t reopen, “either we’ll sit in the house or we’ll go to work.”

Meanwhile, since there is no school, Smail’s 12-year-old son has been going to work in a local barber shop without pay to get experience. When asked if he liked work or school better, he said, “Both of them,” but was quickly scolded by his mother, “No, school!”

Smail is so set on her children’s education that she has set up a wooden board in the hallway in the family’s tent where she has the children practice the multiplication tables or writes words for her youngest daughter to practice reading. But it’s not the same as the structure provided by school.

“They have nothing to do all day. They sleep during the day and stay up late at night,” she said. “They weren’t like this before, when they had school. They would get up in the morning and go to school, and when they came back they would have reading and writing to do.”

Mona al-Smail writes a multiplication table for her 7-year-old daughter, Ritaj, on a board set up in their tent in Arsal. Ritaj and her three siblings are out of school this year after the informal school they were attending was shut down. (OLJ/João Souza)

Zahouri said she hasn’t been able to homeschool her children because they gave last year’s books back to the school at the end of last year, and since the tent gets only four or five hours of electricity and she can’t afford a generator, even studying online using her mobile phone is difficult.

“The children fight a lot because the tent is small, cramped, and there is no chance for them to go outside and play,” she said, adding that she won’t let them play outside due to fears of crime and security issues.

Informal schools were initially meant to be a stopgap measure until refugee children could return to Syria or be enrolled in public schools, but in many cases, children never returned and never made the switch. The informal schools do not offer the children official credentials in Lebanon, but for some families, any education was better than none.

Zahouri said that when she first put her children in one of the informal Syrian schools after fleeing from Qusair to Lebanon in 2013, she and most other refugee families did not think that enrolling their children in Lebanese public schools was an option.

“After two years or three they told us there are public schools,” she said. “But we were already with the [informal] school — they built it and our children were studying there, so we left them there.”

A child walks through the camp where his family lives in Arsal. (OLJ/João Souza)

Other parents said they preferred sending their children to the Syrian-run schools — which are generally located in or next to camps — because of the proximity and because of cost and safety concerns about the children traveling by van to school. Most Syrian students in public schools attend afternoon classes, meaning they would come home after dark in the winter when weather in Arsal is often severe and the roads become icy or impassable.

Latest in a string of misfortunes

For refugees in Arsal, the school issue is just the latest in a series of difficulties. First, there were the security issues: from 2014 to 2017, Syrian militant groups including Daesh and the Nusra Front established cells around Arsal and sporadically fought with the Lebanese Army and Hezbollah.

After they were driven out, the security situation calmed, but then came the order last year to demolish any concrete structures higher than one meter in the refugee camps, so refugees were left to face last winter’s storms with only wood and tarp as shelter.

Then came the economic crisis and rising food prices. But even with the worsening situation, the families who spoke to L’Orient Today said they are more afraid of going back to Syria than remaining in Lebanon.

“We wish that our living conditions will improve and that the children can go back to school and study in a good school, and that we can go back to our country — but with security and not being always afraid,” Zahouri said.

ARSAL, Baalbeck — Several thousand Syrian refugee children who had been attending uncredentialed community schools in Arsal found themselves facing the prospect of no school this year, after Lebanon’s Education Ministry ordered the learning centers to be shut down without immediately offering an alternative.There are about 10,000 primary school aged Syrian children in Arsal, and the public...