Shankaboot co-creator Bassem Breche cuts his arthouse teeth in Cairo with Riverbed, his feature film debut, and wins three prizes in the process. 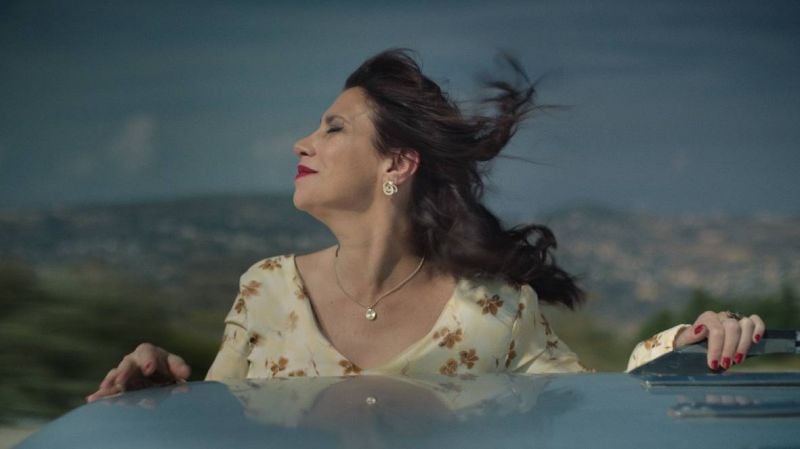 Carole Abboud in a still from Bassem Breche’s ‘Riverbed.’ (Courtesy of The Attic Productions)

BEIRUT — “In cinema, they say, when you see a mother, you think of Mother Nature,” says Lebanese filmmaker Bassem Breche. “A woman is a mother and a mother is Mother Nature. Basically, I wanted this film to break that metaphorical chain.”

Breche at times looks a bit pixelated as he discusses his new film, Riverbed. The jury is out on whether to blame Lebanon’s wobbly internet for disrupting this Zoom meeting, or the crap wifi at Breche’s Cairo hotel.

The writer-director’s feature film debut will be held at the Cairo International Film Festival on Saturday. Riverbed is competing in Horizons of Arab Cinema, the CIFF section devoted to Arabic-language cinema, alongside seven other titles — including “Mother Valley,” by Breche’s countryman Carlos Chahine.

Set in a remote village in Chouf, Mount Lebanon, Riverbed tells the story of Salma (Carol Abboud), a self-reliant woman nearing middle age, whose routine is disrupted when her past comes to visit.

Salma works from home, operating the switchboard of the village’s antiquated telephone network. During working hours she’s visited by two ladies of a certain age, who slurp maté — the tea popular in regions that have known migration to Latin America — and swap gossip about sinful neighbors who have breached village propriety.

Salma seems indifferent to such recreational hearsay. In her off hours, she manages a furtive romance that would itself be worthy of a few pots of maté, were it to be discovered. 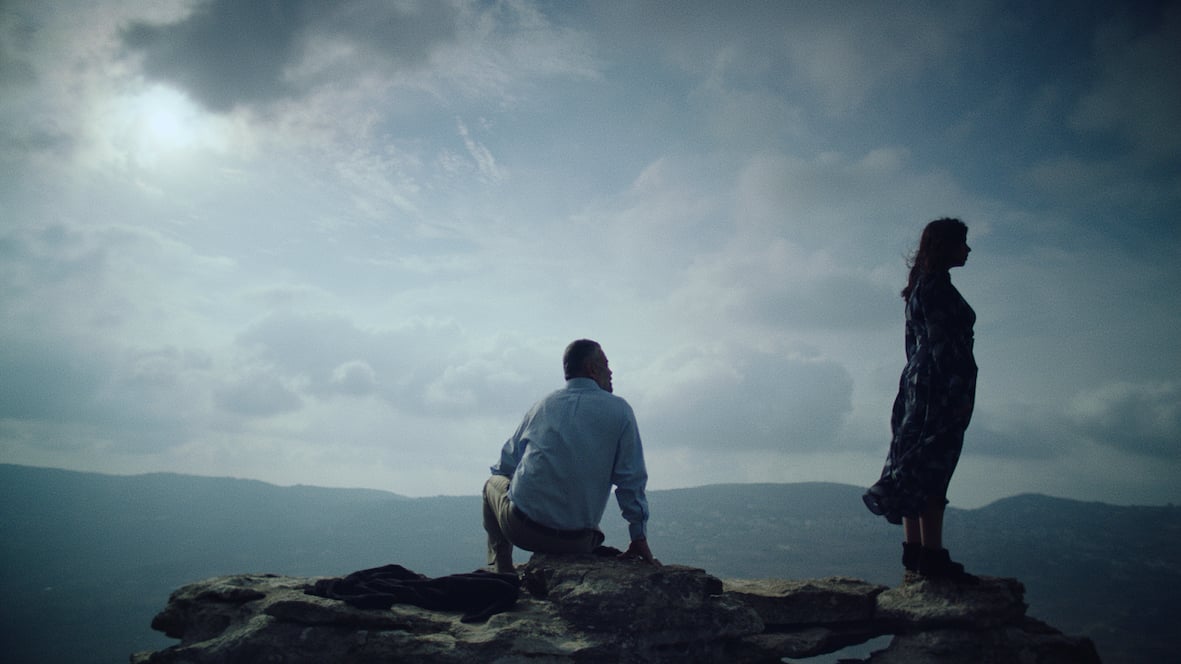 Carole Abboud and Rabih El Zahr in a still from Bassem Breche’s ‘Riverbed.’ (Courtesy of The Attic Productions)

One evening, a young woman turns up at Salma’s house and, finding no one at home, lets herself in. After nosing around a bit, she falls asleep. Sometime later she re-opens her eyes to a blur that resolves into the handgun Salma is pointing at her face.

“You never know these days,” the mother mutters. “You should shut the door behind you.”

Amidst the shared silences of their taciturn relationship, Salma learns that Thuraya may need her help.

Breche says the makings of this story have been with him for a while.

“Basically, I’m interested in telling stories of families,” he says. “I was born in the late 70s and grew up in a remote village in Mount Lebanon. There were absolutely no men around. They were either fighting or working or had left the village to the Khalij or Africa or the US or wherever.”

His childhood experience was one of a village populated by women, babies and old people.

“In the village, you’re not exposed to anything,” Breche recalls. “There was no cinema, no theatre, nothing. You just have to deal with what’s in front of you. I spent a lot of time walking around with my mother in the mornings, spending time with other women. I heard lots of stories of women.

“When I started working on the script, five or six years back, I was re-visiting that time in my life. That’s when I decided to make a film about a woman’s story, the story of a mother-daughter relationship.” 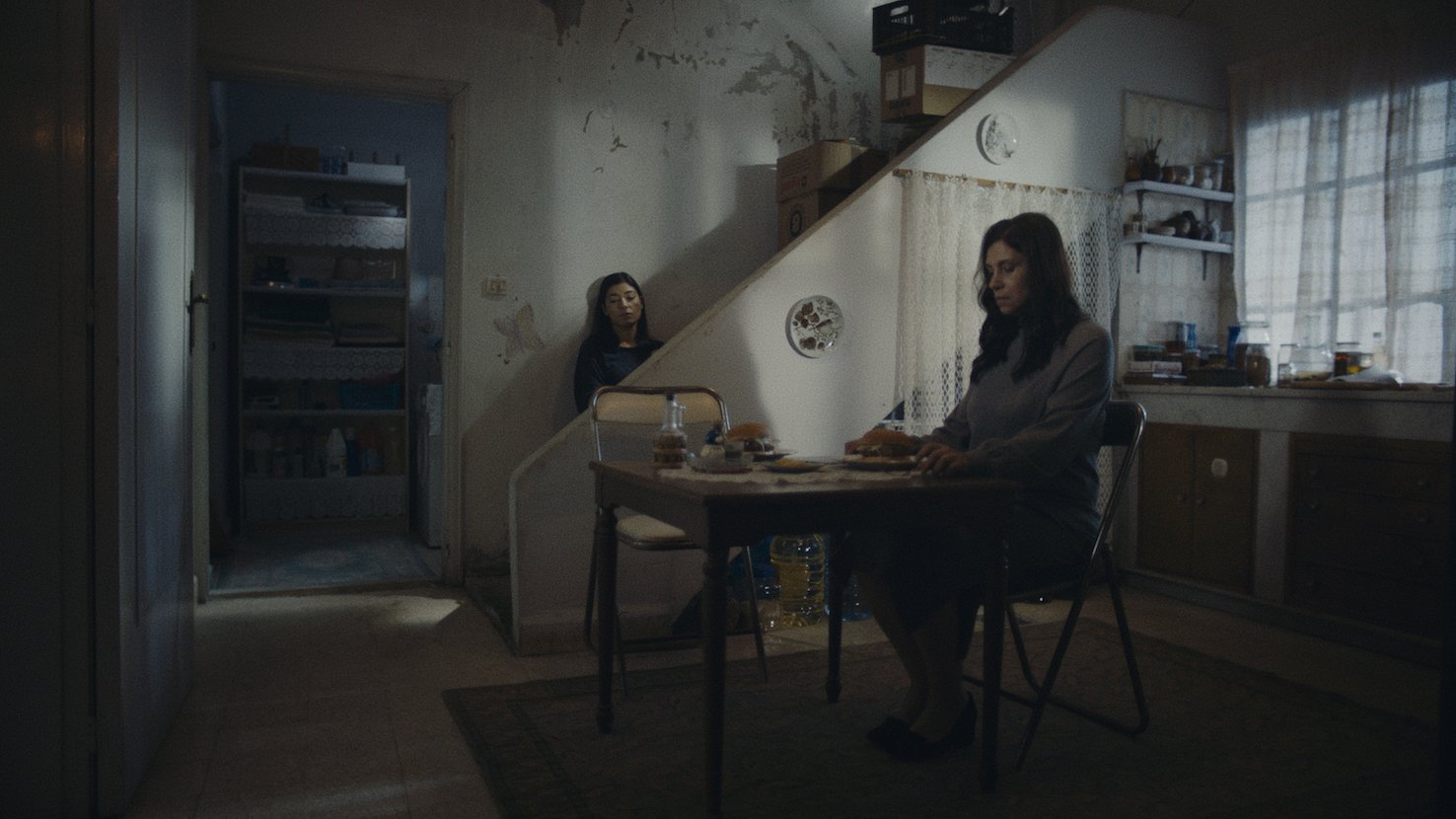 Carole Abboud and Omaya Malaeb in a still from Bassem Breche’s ‘Riverbed.’ (Courtesy of The Attic Productions)

The writer-director started developing the script for Riverbed in 2014. Breche has scripted several series over the years — not least Shankaboot, 2009-2011, which won an International Digital Emmy Award in 2011.

For his freshman feature, he shares writing credits with Ghassan Salhab, a seasoned arthouse filmmaker with six features and numerous film essays to his credit. Breche says he didn’t have a clearly structured narrative when he started working on the project.

“Basically we started digging,” he says. “What does it mean, to have no men in the family?”

Breche wasn’t interested in why the village men are absent. Explaining things, he says, is easy. The silence is more important.

The way Riverbed looks and moves is in line with conventions common in international arthouse cinema. These include an appreciation of fixed camera shots, long takes and striking exterior locations.

Silence, too, is loved. It’s impressive how much the film is able to convey — both dramatically and comically — with relatively little dialogue. Between its reticent characters, sparks of dry comedy, and picturesque rural photography, Riverbed is reminiscent of the early work of Turkish auteur Nuri Bilge Ceylan.

“I’ve used lots of dialogue in my series,” Breche says. “Here I didn’t want to do that. Silence is a way of being true to the story’s location— the people in this village don’t speak a lot. The silence is also faithful to the cinema that I love. I want the picture to speak, to express feelings. I don’t want to use words.

“In the film’s sound design, the cinematography, the details, we made a whole world to help the words be as effective as they can be. If you have one sentence in 15 minutes, this sentence is probably gonna stick in your head.” 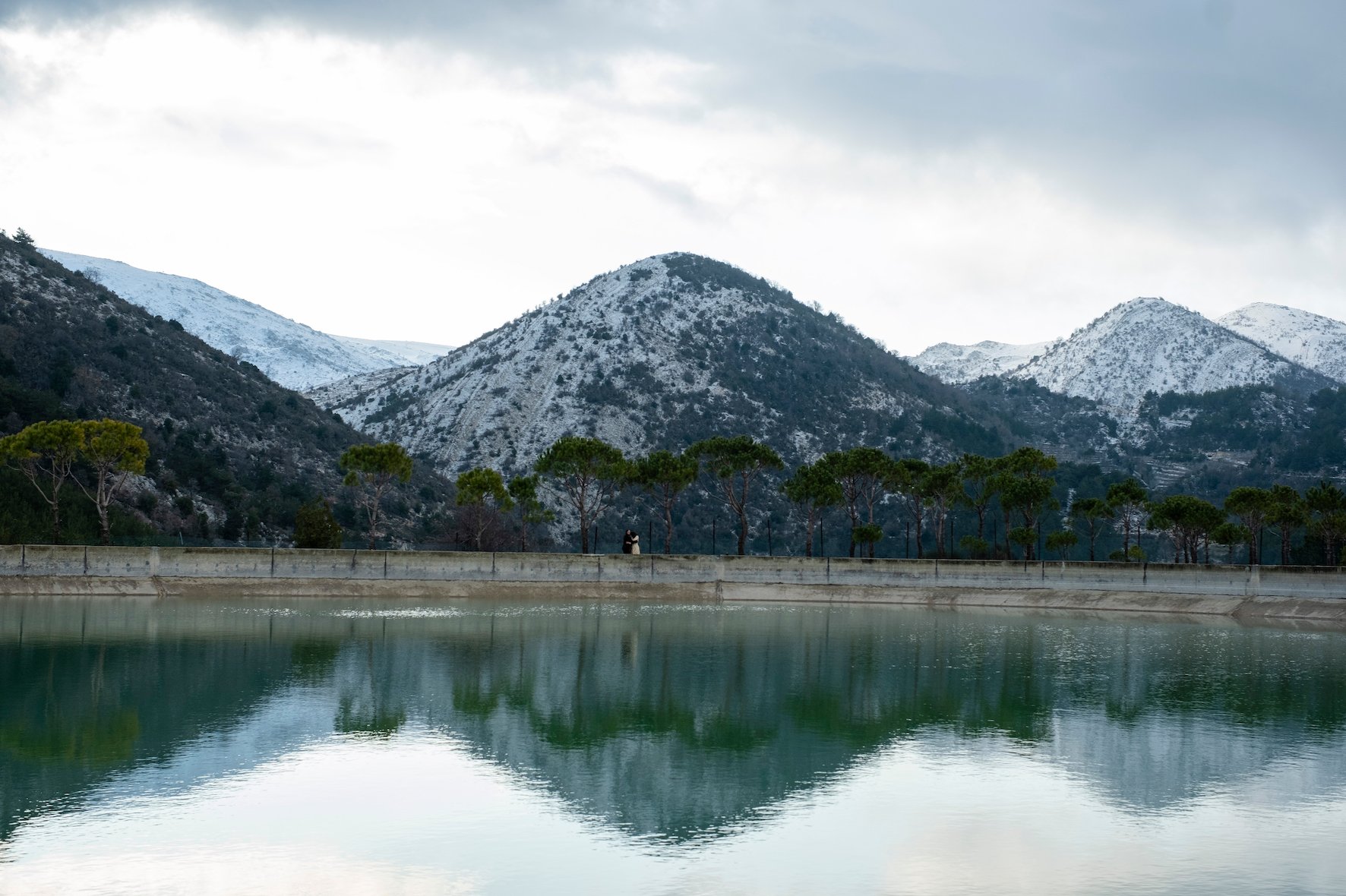 Carole Abboud and Rabih El Zahr in a still from Bassem Breche’s ‘Riverbed.’ (Courtesy of The Attic Productions)

These silences, and the shards of communication that sometimes slice through them, are complemented by a counterpoint of nondescript locations (whether interior rooms or the village’s frayed scenery) and spectacular exteriors.

A woman and her lover are reduced to incidental detail by the mountain range behind them and its reflection, mirrored in the lake surface before them. Elsewhere in the film, Salma walks across an outdoor basketball court, where four players jog in place, prompted by a whistle-blowing coach.

Breche says that when he and cinematographer Nadim Saoma scouted locations, they were on familiar terrain.

“I knew from the start that the film — the story of this woman and the daughter who returns — would unfold inside Salma’s house. I also knew that I want to leave this house. Nadim and I spent four or five months in the area, living there visiting locations. We filmed in the areas that I know best — from the mountain scenes, where Salma meets her lover, to Birakat al-Arous [the mountain stream that lends its name to the film’s Arabic title]. That area’s very dear to me. It’s more than beauty. It’s poetry. It’s ugly too, in places.”

Breche tips his hat to two senior filmmakers in the film’s credits. One is Salhab, his co-writer and the other is Palestinian auteur Elia Suleiman, whom he says was uninvolved in production. Breche regards both these filmmakers as mentors, but their roles have been quite distinct.

“Elia’s work made me become a filmmaker,” Breche says. “I didn’t know him, and only met him recently in fact. I was studying theater and was supposed to go become a dancer. Then one day I watched Elia’s film Divine Intervention. I was amazed. You can do this? with cinema? Later we became friends. 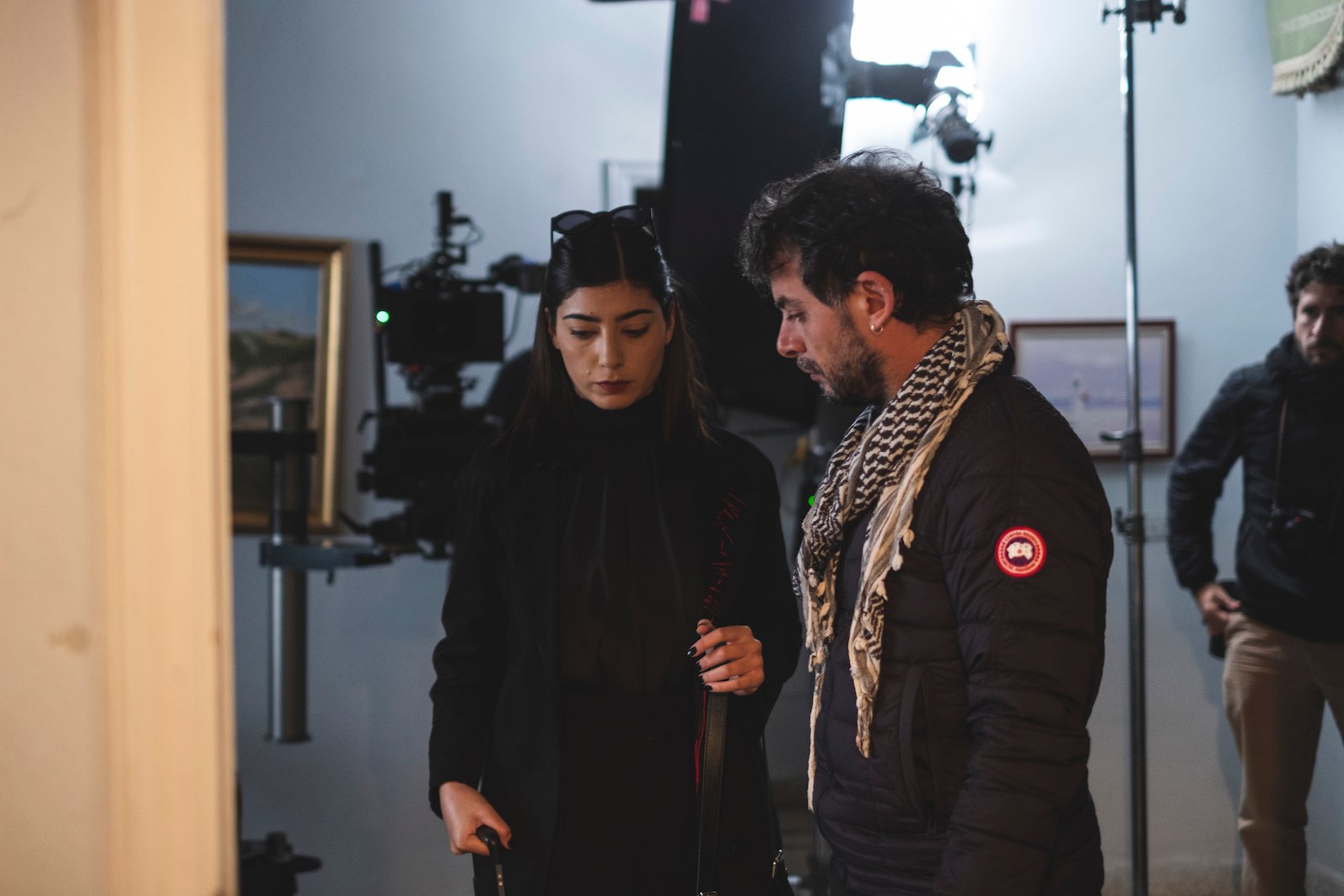 Omaya Malaeb and Bassem Breche in a production shot from ‘Riverbed.’ (Courtesy of The Attic Productions)

“I approached Ghassan first and told him, ‘Listen, I have this script I’m thinking of. If you like it, I would like you to join.’ He told me he was very busy but said he would read it. He did, and he decided to work with me on it. It was a two-year journey, not only writing but learning how to make films. Ghassan is very particular in the way he sees cinema. I agree with him on lots of things, but we disagree on things too. Elia and Ghassan are mentors, and we’re friends.”

Breche says he received some blowback about the story he’s chosen for his first feature, though at that point no one had actually seen Riverbed and its compassionate depiction of its lead characters.

“I’ve been getting a lot of ‘Why are you, a man, coming now and telling a story of two women?’

"I think, yes, as men we have to sit and listen to what women have to say.” He pauses. “That doesn’t mean we don’t have a point of view to share.”

BEIRUT — “In cinema, they say, when you see a mother, you think of Mother Nature,” says Lebanese filmmaker Bassem Breche. “A woman is a mother and a mother is Mother Nature. Basically, I wanted this film to break that metaphorical chain.”Breche at times looks a bit pixelated as he discusses his new film, Riverbed. The jury is out on whether to blame Lebanon’s wobbly internet for...